Which is your next Windows Phone device - Nokia Lumia 920, HTC 8X or Samsung ATIV S? 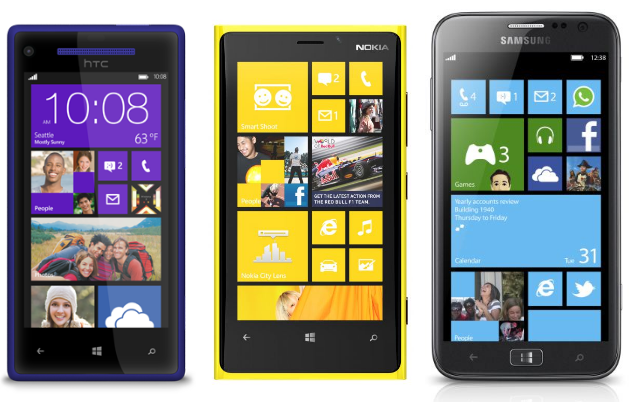 With HTC's Windows Phone announcement last night, we have three of the most awaited Windows Phone devices in front of us - Nokia Lumia 920, Samsung ATIV S and HTC 8X.

There is no pricing or exact availability dates for any of these, but these three are going to be the main contenders for the next smartphone purchase of any Windows Phone lover. Let's take a look at these devices and what they have to offer.

Starting with HTC 8X, which is the latest of them. This uni-body Windows Phone from HTC, is packed with industry-leading specifications. 8X comes with 4.3-inch 720p Super LCD 2 display; it is the same display that we last saw in HTC One X, just a little smaller.

Company also seems to have included the same camera tech used in One X, but it does not use ImageSense branding here. The device sports an 8MP CMOS sensor with backside-illumination (BSI) for improved low-light performance, along with an f/2.0 aperture, 28mm lens and a dedicated imaging chip.

The front camera also seems great on-paper; it is a 2.1MPwith f/2.0 aperture and 88 degree ultra-wide angle lens. 8X is also the first Windows Phone with Beats Audio technology and an audio amplifier.

HTC also seems to have realised the importance of colours with the new Windows Phone devices. Windows Phone 8X will come in a variety of colours including California Blue, Graphite Black, Flame Red and Limelight Yellow.

On the downside, there is no expandable storage on 8X and you will only get 16GB of on-board storage, part of which will be used by the operating system itself.

Nokia has always produced some top notch hardware and we expect the same from Lumia 920. Another interesting feature in the 920 is wireless charging. The smartphone support Qi wireless charging standard. As expected, Nokia Lumia 920 will come in a variety of colours including yellow, red, grey, white and black.

There is no microSD card slot in Lumia 920, but Nokia is providing 32GB of storage, which should be enough for most smartphone users.

Talking about Samsung's ATIV S, it provides the best of the three specifications on paper. Featuring an aluminium body, ATIV S comes with 4.8-inch Super AMOLED HD display, similar to what we have seen in Galaxy S III.

There is also an 8MP camera on the back along with 1.9MP front camera. Company also provides a microSD card slot along with 16/32GB of internal storage. Overall the smartphone looks quite decent.

As there are only odd differences between the three devices, it will all come down to the pricing and how soon they can reach the market. 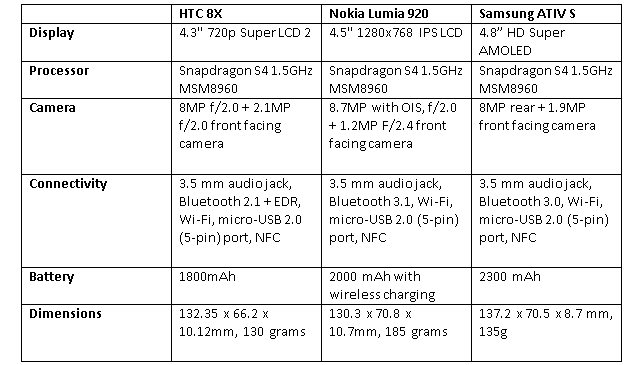