Vivo V5 vs Oppo F1s vs Gionee S6s: Which One Should You Buy?

There’s a ‘selfie battle’ raging between the Vivo V5, Oppo F1s, and the Gionee S6s right now. After comparing how the phones stack up to one another on paper, it’s now time pick a winner. After having reviewed all three smartphones, we’re now in a better position to pick a concrete winner across departments and of course, an overall winner that stands out as a complete package.

The Vivo V5 (Review) is the newest rival in the mid-range segment that goes up against existing selfie-focused phones such as the Gionee S6s (Review), and the Oppo F1s (Review). All phones are available at around the Rs. 18,000 mark, so which one should you pick?

Design
This is generally a subjective area, but after using all three phones, we can confidently say that the Oppo F1s offers the best balance of weight, ergonomics, and aesthetics. The Vivo V5 is out of the running here, because despite its pleasing looks, the plastic chassis is just no comparable to the metal bodies on the other two. The Gionee S6s and the Oppo F1s both sport metal bodies and weigh around the same at 166 grams, and 160 grams, respectively. However, the Oppo F1s is slimmer at just 7.3mm, and feels a lot more polished and well put-together of the two. Plus, the rounded corners make it easier to use, when compared to the Gionee S6s.

Display
Display is a crucial part of any smartphone and here, the Gionee S6s is an easy pick. It trumps the other two by offering a full-HD resolution, versus HD resolution on both the Oppo F1s and the Vivo V5. Colour reproduction is also quite impressive here, and we didn’t have any issues with screen legibility in sunlight. All three phones also support Gorilla glass so you needn’t worry about the display getting scratched up easily. The Oppo F1s comes in a close second in terms of display performance because although it has only half the resolution, the colour reproduction was pretty accurate on this phone. The Vivo V5’s display is very vivid, and sometimes looks oversaturated, which might not suit everyone’s taste.

Software
All three manufacturers’ use their own implementation of Android and weirdly, they all seem to mimic Apple’s iOS in some form or the other. Vivo’s FunTouchOS 2.6 now uses Marshmallow as its base, which is great, but the interface still feels clunky and unnecessarily complex. Oppo’s Colour OS 3.0 is easily the most polished of the lot but it’s still stuck on Android Lollipop, which is a bit of a shame. The Gionee S6s is the one we’d pick out of the lot as it runs on Android Marshmallow and the Amigo 3.2 OS offers plenty of customisation. Our only gripe here is that it comes with a lot of pre-loaded apps, which you may or may not find useful and sadly there’s no way to get rid of most of them. 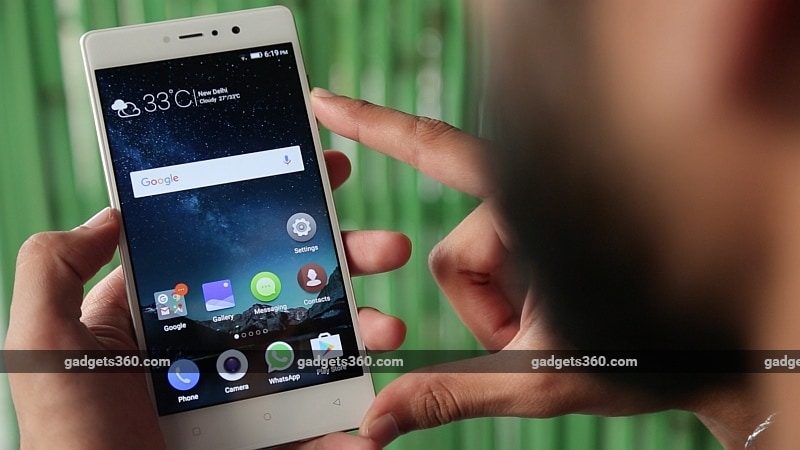 Performance
All three smartphones are powered by octa-core MediaTek SoCs, which results in similar benchmark performance. The Gionee S6s uses a slightly different chip (MT6753), whereas the Oppo F1s and the Vivo V5 both use the MT6750 chip, which runs at a slightly faster clock speed of 1.5GHz. In benchmarks, the Gionee S6s is the weakest of the three, although not by much. However, it does trail quite behind the other two in graphics tests, which leaves it out of the running.

Between the Vivo V5 and the Oppo F1s, we’d have to go with the Vivo due to the 4GB of RAM it has, versus 3GB on the other two. It might not make much of difference right now, but a year down the line when your phone is filled with apps, this extra gigabyte of RAM might make all the difference. Real-world performance is also really good as we never felt the phone getting bogged down by apps or games. It's worth pointing out that the an Oppo F1s version with 4GB of RAM and 64GB of storage is now also available in the market at Rs. 18,990, but we didn't consider it for this comparison as we haven't tested it yet.

Battery life
We managed to get a full day’s worth of usage with all three phones but looking at it objectively, the Gionee S6s manages to nudge past the other two. It has the biggest battery out of the three at 3150mAh and not surprisingly, manages to deliver the best time of 13 hours and 10 minute in our continuous video loop test. It also manages to charge pretty quickly, in little over two hours, from zero to full. This is something you don’t get with either the Vivo V5 or the Oppo F1s.

Camera
The camera is an important part of these phones’ repertoire, especially the front-facing ‘selfie’ camera. In our testing, we found the Oppo F1s to have the better set of cameras among the rest. The front 16-megapixel camera captures highly detailed pictures in good lighting and it’s not too bad in low-light too. Oppo’s ‘screen flash’ feature is much better this time around (compared to the F1) due to the brighter display but isn’t very powerful for pitch dark conditions. In this situation, the Vivo V5’s ‘moonlight glow’ is the most effective, which projects a continuous beam of diffused light.

The reason we’ve gone with the F1s in this category is because of its very capable rear camera, something which both Gionee and Vivo seem to have neglected. Armed with a 13-megapixel sensor just like the Vivo V5 and the Gionee S6s, the Oppo F1s manages sharp and well detailed stills and macros in daylight. Low-light shots suffer from noise a bit but it’s still well under control and not enough to ruin the overall image.

Verdict
After tallying the scores, it’s pretty clear that there's no runaway winner in this competition. While the phones launched sporting a similar MRP - the Oppo F1s at Rs. 17,990; Gionee S6s at Rs. 17,999; and, most recently, the Vivo V5 at Rs. 17,980 - their current market price means the Gionee is available at around Rs. 14,800; the Oppo smartphone at roughly Rs. 16,400; and the V5 is holding its launch price.

The Gionee S6s excels mainly in the battery, software, and display departments. It also happens to be the least expensive of the lot right now, which means it's probably the smartest pick at the moment. If your priority is the camera, and aesthetics play a big role in your purchase decision, then you might want to consider the Oppo F1s instead.

The Vivo V5 is currently the most expensive of the three and while it does have a slight edge in the performance department, it lags behind the other two in pretty much everything else. Having said that, we do feel that among the three the Vivo V5 has the most effective implementation of the selfie flash, which is more of a fill light than an actual flash.

We hope this is article has cleared your doubts on which phone you should get. Let us know which one would you pick and why, in the comments.

Further reading: Oppo F1s vs Gionee S6s vs Vivo V5, Oppo F1s price, Oppo F1s price in India, Vivo V5 price, Vivo V5 price in India, Gionee S6s price, Gionee S6s price in India, Oppo F1s specifications, Gionee S6s specifications, Vivo V5 specifications
Roydon Cerejo Email Roydon
Roydon Cerejo writes about smartphones and laptops for Gadgets 360, out of Mumbai. He is the Deputy Editor (Reviews) at Gadgets 360. He has frequently written about the smartphone and PC industry and also has an interest in photography. With over a decade of experience covering the consumer technology space, he is also an avid sci-fi movie and TV show geek and is always up for good horror flick. Roydon is available at roydon@gadgets360.com, so please send in your leads and tips. More
Cyanogen May Cut More Jobs, Close Seattle Headquarters: Report
Reliance Jio Said to File Complaint With Competition Commission Against Rivals

Vivo V5 vs Oppo F1s vs Gionee S6s: Which One Should You Buy?
Comment