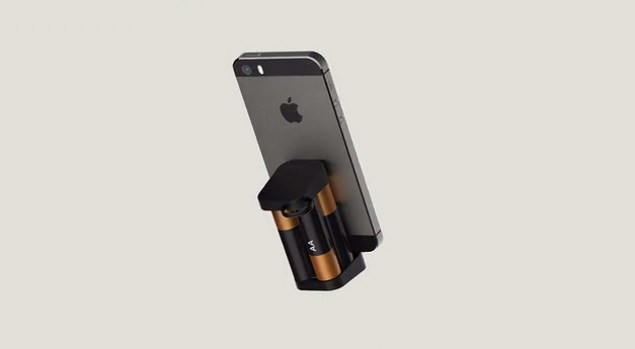 In our weekly series on the world of crowdfunding, we look for the most interesting and exciting projects on sites like Kickstarter and Indiegogo. We're on the lookout for the next big thing in tech like the Pebble smartwatch or the Oculus Rift, and while everything won't be the next game-changer, there's usually something that's cool, or at least fun - and this week's find fits that description.

Today, having your phone run out of charge is such a common problem that everyone's learned to keep a power bank handy - but of course, you've got to remember to charge the power bank, just the way you have to charge the phone.

If your phone and power bank are both out of juice, then you're powerless to do anything about the problem. That's where the Oivo charger comes in.

This little keychain fob-sized accessory is actually two pieces of a charging plate held together with strong neodymium magnets. You can pry the pieces apart, and fit four-AA batteries in between, to get a battery pack that connects to your iPhone's Lightning port.

There are actually a fair number of chargers that use AA batteries - this one from Verbatim is available online for $12.39 - approximately Rs. 750. The four batteries can add up to eight hours of talk time, and unlike power points or USB ports, AA batteries can be bought pretty much anywhere, making this type of charger useful in a real world scenario. It is wasteful - the batteries will be thrown away, and you'll spend Rs. 120 if you're buying Duracell; but if you're on the road and don't have a charging point handy, you can at least get your phone running.

What sets the Oivo apart from other AA battery chargers is its small size. The other chargers of this sort are all large chambers with a USB port - you end up having to carry something that is as big as your iPhone, just to keep it charged. At least the rechargeable power banks are getting slimmer these days.

The Oivo does away with the chamber to hold the batteries in place, and replaces it with strong neodymium magnets - the two contact plates are cut into wedges that fit together to make a nice looking keychain, but can be pried apart to hold the batteries tightly when needed. The small size means that the Oivo will always be with you, unlike other battery power packs whose extra bulk makes them less likely to fit in a pocket.

You can see the full pledge video below:

The team is trying to raise $50,000 by October 3, and for a pledge of $39, you will get one Oivo charger. We're quite enthusiastic about this little charger, and the team says that after the iPhone version is launched, if there is enough demand, it will also make a version with a Micro-USB, so Android and Windows Phone users might be able to get this too.