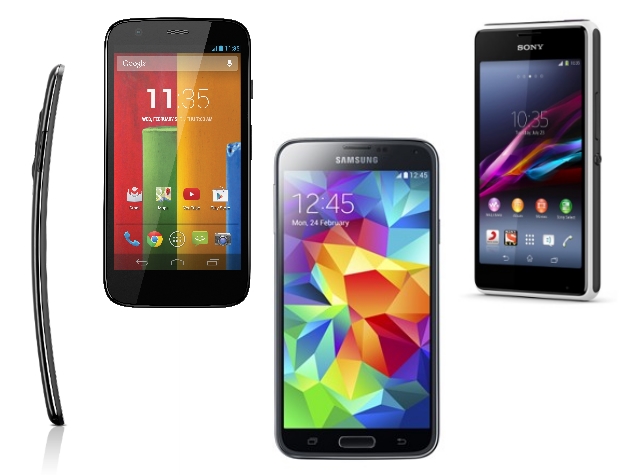 A lot can change in a little while. We've just seen the launch of two new flagship phones, but there have also been plenty of new launches across the board. Many of the phones that made headlines at the annual Mobile World Congress this February have now launched here, or have been announced (with official pricing) ahead of actual availability. Since you can now get a whole lot more for your money, it's time to update our Spring 2014 smartphone buyer's guide with new products, updates and pricing information.

We've narrowed down the enormous number of phones available today to just a few in each price band. We've considered a huge number of parameters, including price, performance, features and versatility, build quality, camera quality, battery life, and upgradability.

Methodology
We've divided the market into a number of price bands, based on current trends and the amount a buyer can usually stretch his or her budget by after having identified a reasonable model. Generally, the phones in each price band will be comparable in terms of features and capabilities. We've also considered current street prices, as opposed to MRPs, since these prices do drop over the course of a device's life, and what really matters is the price right now.

The cheapest devices that could possibly qualify as smartphones sell for between Rs. 5,000 and Rs. 9,000. Beyond that range and up to Rs. 14,000, it is now possible to buy a modern smartphone with all the basic features in place.

Between Rs. 14,000 and Rs. 30,000, we are firmly in mid-range territory. However, due to the massive difference between devices at either end of this band, we've subdivided it even further. Budget-friendly options now include models with quad-core processors and reasonably good cameras, with Indian brands muscling in on the territory formerly dominated by multinationals. You also have a wider range of platform options. A number of smartphones that were top end just a year ago, and are still perfectly serviceable, make up the higher end of this band.

Above Rs. 30,000, we have a variety of models that are nearly as powerful as the flagships of each brand. These are usually only one generation old, or "lite" versions of top-end products, and represent pretty good value for money.

Most current flagship models are priced between Rs. 40,000 and Rs. 65,000. In this range, you'll find each brand's most feature-laden phone. In fact, most are priced at around Rs. 45,000, with the upper reaches of this category made up of variants with more storage capacity.

Of course, if money is no object, there are phones even more luxurious that you can splash out on. Some of these have designer touches, or are built out of luxurious materials.

Here are our top picks in each category:

Rs. 5,000 - 9,000
The Nokia X Dual SIM (Review I Pictures) is a compelling product that lets users run a huge number of Android apps, with the benefit of Nokia's legendary construction quality and a recent price reduction. There's fresh competition, though, in the form of Sony's new Xperia E1 (approximate street price: Rs. 7,500) and Xperia E1 Dual (approximate street price: Rs. 8,250). Both versions of this phone are priced very reasonably and offer a mainstream Android environment and of course access to the Google Play store.

Nokia fans who don't mind tweaking and modifying their phones will still like the Nokia X (and upcoming Nokia XL), but buyers should compare the specs and software features of both companies' options to decide which is better for them.

Also in this price band, there are a few old favourites: the Samsung Galaxy Star and Star Pro, and the still-popular Nokia Lumia 520 (Review I Pictures).

Rs. 9,000 - 14,000
Plenty of phones have tried to muscle in on this territory, but the Motorola Moto G (Review I Pictures) approximate street price: Rs. 12,500) remains our top pick (though we'd prefer the 16GB version which costs only very little more). Its balance of performance, build quality, software and features is currently unmatched. There are of course tradeoffs, such as the lack of expandable storage.

The Xolo Q1100 (Review I Pictures) (approximate street price: Rs. 13,050), which was a strong contender in the next highest price band, has now fallen in price. Its scores are roughly at par with the Moto G's, and the support for microSD cards makes it a tempting option, even though build quality is a bit worse.

Other products in this price band worth considering are Lenovo's new metal-bodied S660 and Micromax's big-screened Canvas Doodle 2 (Review I Pictures). Windows Phone fans can consider the Nokia Lumia 525 (Review I Pictures), which is a slight spec-wise improvement over the 520 but is otherwise identical.

Rs. 14,000 - 17,000
There haven't been many new launches in this price band of late. The Lava Iris Pro 30  (Review I Pictures) is a worthy pick, with a distinctive look and smaller screen that some might prefer. Lenovo's S820 is a relatively old model, but is a market favourite thanks to its good battery life.

The BlackBerry Q5 (Review I Pictures) would otherwise have been easy to overlook, but it now slots in just slightly below Rs. 17,000 and is the only phone on our list with a QWERTY keypad. The tradeoff is a smaller screen, but at least BlackBerry has continued to update its BB10 OS.

Rs. 17,000 - 22,000
Samsung's Galaxy Grand 2 (Review I Pictures) is a strong contender based on its price and specifications. It might be too large for some to use comfortably, in which case we have other suggestions too. Sony's new Xperia M2 Dual (approximate street price: Rs. 20,000) has largely the same specifications but a smaller and lower resolution screen. You're definitely not getting top-of-the-line specs with either, so the choice comes down to personal preference.

If you like large screens and the Windows Phone OS, you could consider Nokia's Lumia 1320 (Review I Pictures) which stands out from the Android crowd. BlackBerry's Z10 (Review I Pictures) is priced much lower, and you'll find it very well built and comfortable to hold and use.

Rs. 22,000 - 30,000
Samsung's Galaxy S4 (Review I Pictures) (approximate street price: Rs. 28,900) is still a phenomenally good deal at its new low price. You don't need to think twice about jumping at the chance to buy this full-HD phone with all the bells and whistles that was Samsung's flagship offering not too long ago. If you don't like Samsung's many software embellishments, you can't go wrong with the "pure Android" Google Nexus 5 (Review I Pictures).

The Micromax Canvas Knight (Review I Pictures) (approximate street price: Rs. 23,500) offers specifications that seem to belong to phones priced higher than it. You'll get a full-HD screen and octa-core processor and even a 16-megapixel camera. A new entrant challenging it at roughly the same price is the Motorola Moto X (Review I Pictures). With excellent build quality and a unique voice command feature, you should definitely give it some consideration.

Rs. 30,000 - 40,000
Thanks to the launch of its successor, the HTC One M7 (approximate street price: Rs. 38,500), formerly known as the One 802d, has fallen into this price band, where it gives the LG G2 (Review I Pictures) stiff competition. Its metal body will turn heads, but you'll be settling for a slightly less powerful Snapdragon 600 processor.

If a good camera is your main priority, there's nothing at all like the Nokia Lumia 1020 (Review I Pictures). Its stunning 41-megapixel camera is capable of taking incredible shots, and you get loads of creative shooting and editing options as well.

If you're looking for top-of-the-line performance and don't want to deal with a huge phone, the Sony Xperia Z1 Compact (Review I Pictures) is a superb choice. On the other hand, Samsung's outsized Galaxy Note 3 Neo (Review I Pictures) comes with a handy S-Pen stylus and lets you jot notes, run multiple apps at once, and enjoy movies and games on a huge screen.

The iPhone 5c (Review I Pictures) is also available at a sub-Rs. 40,000 street price, and is the cheapest current model you should consider. It doesn't look as slick as the iPhone 5s, but you get all the important features in a handy, colourful package.

Rs. 40,000 - 65,000
Both Samsung and HTC have launched new flagships in this price band, and each will appeal to a different type of buyer. We're leaning towards the Galaxy S5 (Review I Pictures) (approximate street price: Rs. 47,500), which despite its plastic body, has a ton of handy features that set it apart. The One (M8) (Review I Pictures) (approximate street price: Rs. 48,000) looks great and has an innovative dual camera feature, but ultimately comes up feeling a bit short.

Rs. 65,000 and above.
The LG G Flex (Review I Pictures) continues to be the only smartphone in mainstream retail that costs this much. Considering it has the most unique shape and capabilities of any smartphone available in India, many people will find it well worth the price to flaunt one of these.

You could also splurge on a higher-capacity variant of the iPhone 5s for the same amount of money, and if your tastes are even more exclusive, there are designer editions of some phones with gold or jewel-encrusted bodies, and of course the super-luxe Vertu lineup. Performance won't be any better than this generation's flagship phones, so you're paying more for materials and exclusivity.