Samsung Woos Developers as It Eyes Tizen Expansion Beyond Smartphones

While companies such as Microsoft and BlackBerry are struggling to succeed in the face of Android and iOS, Samsung is becoming increasingly committed to developing its home grown Tizen operating system. This might seem odd for Samsung, since the company is one of the best known Android phone makers, but Tizen goes beyond smartphones, and is Samsung's roadmap for the Internet of Things.

Launched in 2012, Tizen has seen a slow start but is now seemingly gaining some traction. The Samsung Z1 Tizen-powered smartphone has also sold over 1 million units, the company claims. But Tizen is not just limited to smartphones. The Linux-based operating system also powers smartwatches, cars, TVs, and refrigerators, among other devices.

On Thursday, at its first Tizen Developer Summit in Bengaluru, India, the company shared the advancements it has made to the operating system and also the roadmap of things to come.

The company unveiled new Tizen SDKs for phones, smartwatches, and smart TVs. It has now brought in the capability to have floating buttons on its mobile operating system, and also added support for DALi (Dynamic Animation Library), a 3D engine that improves the animation capability of a phone. This is the same technology that Samsung is using in its flagship devices, the Samsung Galaxy S6 and the Samsung Galaxy S6 Edge, which of course run on Android.

For televisions, Samsung is providing developers with the ability to use HTML5, JS, CSS technologies to make new apps. The company also aims to improve the built-in integration for apps to use system features. The new SDK also has an improved TV simulator, which developers can use to code apps and test them out for different screen sizes. Samsung also revealed that all17 smart TVs it launched this year are powered by Tizen. Samsung didn't share the number of TV sets sold, with a spokesperson only telling NDTV Gadgets the company is "happy" with the number of TVs shipped. 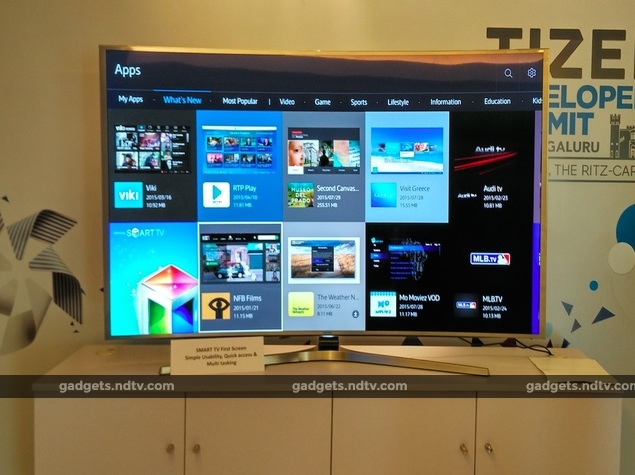 Using some Tizen-powered smart TVs made a positive first impression. The user interface Tizen offers has a slight resemblance to LG's webOS, but is more streamlined and intuitive. The interface declutters information and offers just two choices: featured apps, and recently used apps. If you want more, use the remote to enter the menu; there you'll find sections on what's trending on YouTube and other online networks. Tizen TV also supports split-screen viewing, to watch two things at once. You can split the screen and have something like your Twitter timeline on one side, and your normal TV feed on the other. There's also a toggle that lets you adjust the size of the split screen.

Tizen is also getting some traction in other product categories, such as automobiles, and refrigerators. The operating system has been previously used as a reference platform to offer in-vehicle entertainment, digital dashboards, and climate control among other things by the Automative Grade Linux Workgroup, a Linux Foundation Workgroup dedicated to creating open source software solutions for automotive applications. The Workgroup has some of the biggest car manufacturers including Toyota and Jaguar Land Rover as its partners. Earlier this year, a Samsung executive also announced that the company will be releasing Tizen-powered washing machines, refrigerators, and air conditioners.

The company has made advancements in the emerging smartwatch space as well. We already have several Samsung smartwatches including the Samsung Gear 2 and the Samsung Gear S that are powered by Tizen. Samsung announced a new SDK for the smartwatch at the developer conference on Thursday. New features include the ability to make use of rotatable bezels and round-faced smartwatch.

Despite many advancements and developments, Tizen's fate largely hinges on one thing - the availability of third-party apps. How many apps does the Tizen Store have? The company wouldn't share any numbers, but it claims that between January to July this year, there has been an 84 percent increase in the number of apps; but if the numbers are small to start with, this isn't really noteworthy. Some of the popular apps in its store include Opera Mini, Paytm, Snapdeal, WhatsApp, BookMyShow, Freecharge, and Facebook. 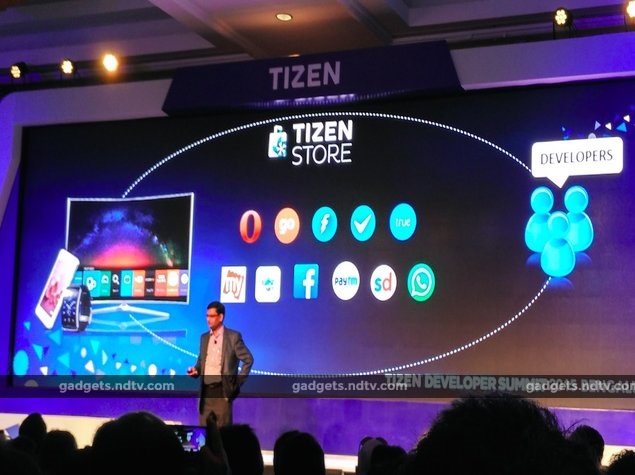 Samsung is pushing hard to grow the numbers - first it allowed developers to easily convert websites into apps, and launch them on the store. This made the app counts shoot up quickly, and didn't require much effort in the development process. But over the past few months, Samsung has become increasingly focused on bringing native apps. To that end, Samsung is offering developers 100 percent of the revenues, instead of charging any commission on earnings. This seems to have helped it get some attention, at least from India; at the conference, Samsung noted that 27 percent of all the apps in its store has been made by Indian developers.

We spoke with some developers who were attending the event to see how excited they were about Tizen, and also what's making them stick to the platform. A lack of competition, it turns out, is a big draw.

"Of course Tizen can't match with the number of users Android and iOS both possess. But we're betting big on being one of the early-birds on this platform," said Prashant Gupta, founder of Davum, a startup that has made more than 1,000 apps for Android and iOS.

"Of the 1,000 apps we have developed on Android and iOS, only about 100 of them are doing reasonably well," he said. "Rest didn't get any attention whatsoever. On Tizen, we've only made about 20 apps so far, and they are clocking an impressive number of ad impressions every day. There isn't a lot of competition on Tizen which makes it very lucrative for a developer to gain visibility."

Aloknath De, Corporate VP and Chief Technology Officer at Samsung India said that the company wants to make Tizen even accessible. As of now, Tizen needs 512MB of RAM and 1GB disk storage on a smartphone to run. De said that in the coming months, the company will make Tizen work with 256MB of RAM and 512MB of disk storage. We asked if Samsung has any plans to introduce support for Android apps on Tizen, and De said that it is something they have been discussing internally, but that the company has nothing definite to share at the moment. 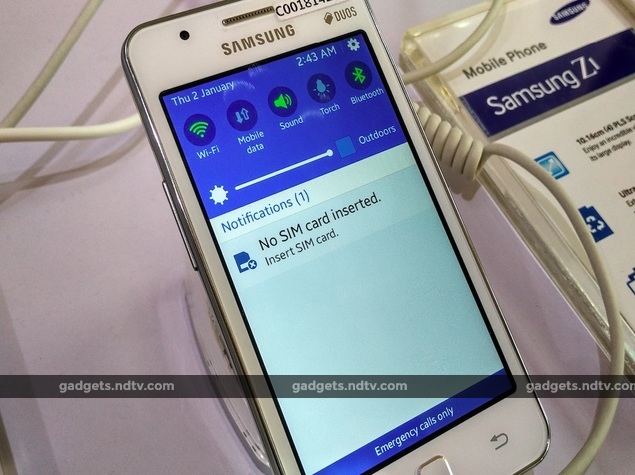 As of now, Samsung is partnering with other companies to make its emerging platform more mature. One such player is Inmobi, a third-party mobile ad network backed by SoftBank and Kleiner Perkins Caufield & Byers, which will give Tizen developers a platform to monetise their apps. Partnerships like this one will make the platform more appealing for developers, Samsung hopes.

When asked if the company has a target in mind for the number of apps it should hit by the end of this year and next year, De told NDTV Gadgets that he doesn't wish to speak about the company's long-term plans.

"Every day, new developers are joining us and making new apps," he said. "We're thrilled with the pace at which Tizen is growing." The biggest challenge for Samsung right now is to convince the big developers to bring their apps to Tizen. Otherwise it could end up with a good number of apps that no one wants, and very few apps that people are actually interested in.

Disclosure: The correspondent travelled to the Tizen Developer Summit at Samsung's expense.
Comments