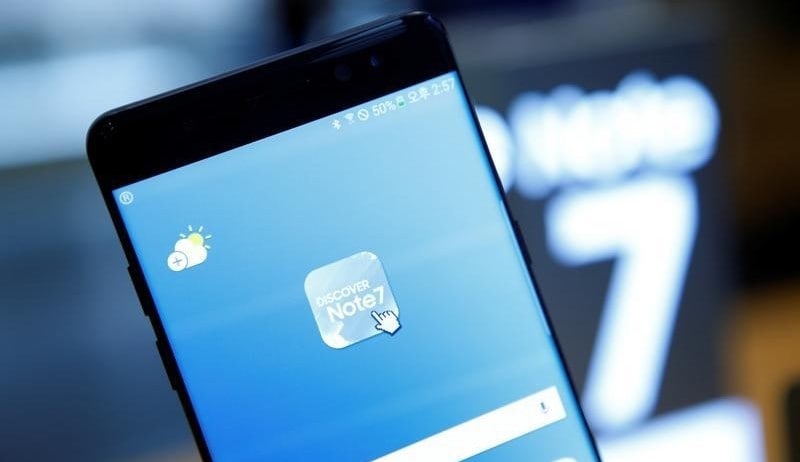 Samsung halted sales of its Galaxy Note 7 smartphones and asked consumers to stop using the ones they've already purchased, another blow to South Korea's largest company as it struggles with a crisis over exploding batteries. Shares plunged.

Samsung has already recalled the Galaxy Note 7 once and the latest move comes after customers reported that replacement phones were also catching fire. It raises the prospect of a second recall and may even force Samsung to scrap an entire generation of Galaxy Note smartphones, one of its two most important phone lines, a severe setback in its competition with Apple and others.

The crisis has left Samsung scrambling to figure out the cause of the battery fires and to explain how a company known for manufacturing expertise could have missed such a critical product flaw twice. Samsung originally blamed one battery supplier for the problems and switched to an alternative company, but it is now investigating the issue again.

"It must find the cause and clearly say what it will do about it," said Yoo Jong-woo, an analyst at Korea Investment & Securities Co. "That way customers won't feel uneasy when buying other Samsung phones."

Samsung shares fell as much as 7.3 percent, the largest intraday drop in a month. The company has growing competition for customers shopping for premium smartphones as they head into the holiday shopping season. Apple just introduced its iPhone 7 and Google came out with its Pixel smartphone, which runs on the same Android software as Samsung's devices.

Samsung's announcement came after consumers reported problems with supposedly safe phones in the US and China, and wireless carriers such as AT&T and Australia's Telstra halted sales. In one case, a Southwest Airlines Co. flight from Louisville, Kentucky, was evacuated because a replacement Galaxy Note 7 began dispersing smoke and burned carpet flooring.

Regulators in Korea and the US also asked Samsung to stop selling or exchanging the phones. "Due to the ongoing safety concerns associated with Galaxy Note 7 phones, it is the right move for Samsung to suspend the sale and exchange of all Galaxy Note 7s," said Elliot Kaye, chairman of the US Consumer Product Safety Commission. Samsung said Tuesday it is cooperating with the regulator on the probe.

Responsibility for leading the company through crisis has fallen to Jay Y. Lee, vice chairman and heir apparent at Korea's largest conglomerate. His father and family patriarch Lee Kun-hee, who remains chairman, has been hospitalized for more than two years after a heart attack. The phone unit is run by D.J. Koh, who took over in December.

The Galaxy Note 7 debuted to rave reviews in August, but the plaudits turned to condemnation within weeks as phones exploded and images of charred handsets began appearing on social media. Samsung announced the initial recall in Korea on September 2, recalling the initial shipment of 2.5 million phones and then replacing them with what it said were safe devices. The flaw, it explained, was with the primary battery supplier, which a person familiar with the matter identified as affiliate Samsung SDI Co. All new phones would have batteries from another manufacturer.

The company has not said how many new or replacement phones will be affected by the latest sales halt. Analysts estimated that the original recall would cost between $1 billion and $2 billion, but that figure will now certainly rise.

The drama may give an opening to activist investor Paul Elliott Singer, who is advocating for a break up of South Korea's biggest company. Singer proposed that Samsung separate into an operating company and a holding company, dual-list the former on a US exchange, pay shareholders a special dividend of KRW 30 trillion ($27 billion or roughly Rs. 1,79,968 crores) and improve governance by adding three independent board members.

The impact may spread to suppliers for Samsung and its rivals. On Tuesday, technology shares had the biggest declines as a group in the MSCI Asia Pacific Index, with fortunes split between suppliers to Samsung and Apple. In Taiwan, shares of Radiant Opto-Electronics Corp., a Samsung supplier, plunged as much as 8.4 percent while HannsTouch Solution Inc. lost 9.8 percent. Among makers of iPhone components, Alps Electric Co. and TDK Corp. jumped more than 1.4 percent in Tokyo, and Japan Display Inc. climbed 3.5 percent.

The immediate question is whether Samsung is going to scrap the Galaxy Note 7 for good or try to reintroduce a fixed version, a decision that will affect suppliers inside and outside the conglomerate. Beyond that, the company will have to assess the impact on future phones.

"What happens to the next version of the phone when it comes out and how much this is going to impact the sales?" said Dan Baker, an analyst at Morningstar Inc. in Hong Kong. "It's not just the phone; their whole ecosystem is behind this - displays, memory chips. If their phone sales drop, then their sales of other parts of the business will be impacted. It's a spiral."