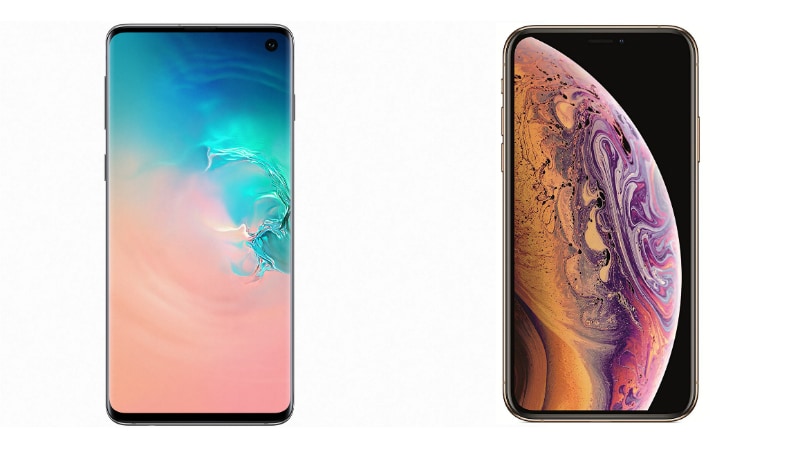 Samsung Galaxy S10 debuted in the US on Wednesday as the next flagship model by the South Korean company. There are many eye-catching offerings on the Galaxy S10 that can easily convince a buyer looking for a top-end smartphone on the market. For instance, there is an almost bezel-less experience that comes from the all-new Infinity-O Display panel. The Galaxy S10 also has an ultrasonic in-display fingerprint sensor that is touted to read the 3D contours of your fingerprints instead of capturing a 2D image that's quite common through other in-display fingerprint sensors. Similarly, Samsung has provided a Wireless PowerShare functionality that allows users to not just wirelessly charge the Galaxy S10 but also charge other Qi-certified devices by placing them on the back of the handset. All in all, the Galaxy S10 is designed to come as a muscular challenger against Apple's iPhone XS.

We put the Samsung Galaxy S10 and the iPhone XS in a head-to-head comparison to see which one comes as a better pick from the part of price and specifications.

The Samsung Galaxy S10 price starts from $899.99 (roughly Rs. 64,000). It will go on sale in Prism Black, Prism Blue, Prism Green, and Prism White colour options. The new model will go on sale on March 8 in the US. However, the India price and availability details of the Galaxy S10 are yet to be announced.

On the display part, the Samsung Galaxy S10 sports a 6.1-inch QHD+ Curved Dynamic AMOLED Infinity-O Display with a 19:9 aspect ratio and a 550ppi pixel density. The iPhone XS, on the other hand, has a 5.8-inch (1125x2234 pixels) OLED Super Retina Display along with a traditional display notch.

The Galaxy S10 is powered by a 7nm octa-core Qualcomm Snapdragon 855 SoC (2.8GHz+2.4GHz+1.7GHz) in some regions and the 8nm octa-core Samsung Exynos 9820 SoC (2.7GHz+2.3GHz+1.9GHz) in other regions including India. It also comes with 8GB of LPDDR4x RAM. Unlike the Samsung phone, the iPhone XS has a 7nm, six-core A12 Bionic SoC. Apple, as a general trend, hasn't revealed the RAM details of the iPhone XS.

For photos and videos, the Samsung Galaxy S10 has a triple rear camera setup that comes with the company's Dual OIS (optical image stabilisation) technology. The camera setup 12-megapixel 77-degree lens wide-angle camera coupled with 2PD autofocus, a variable aperture ranging from f/1.5 to f/2.4, and OIS; a 12-megapixel 45-degree lens telephoto (0.5x and 2x optical zoom) camera with autofocus, an f/2.4 aperture, and OIS; apart from a 16-megapixel 123-degree ultra-wide lens camera with fixed focus and an f/2.2 aperture. The iPhone XS, on the other front, comes with a dual rear camera setup that includes a 12-megapixel wide-angle sensor along with an f/1.8 aperture and another 12-megapixel telephoto secondary sensor along with an f/2.4 aperture. The camera setup has a six-element lens and supports 2x optical zoom.

The Samsung Galaxy S10 has a 10-megapixel camera sensor coupled with 2PD autofocus, an f/1.9 aperture, and 80-degree lens at the front for selfies and video chats. However, the iPhone XS comes with a 7-megapixel RGB camera sensor along with an f/2.2 lens. The front-facing camera is available under the TrueDepth Camera system that enables Face ID support.

On the part of onboard sensors, the Samsung Galaxy S10 has an accelerometer, ambient light sensor, barometer, digital compass (magnetometer), gyroscope, heart rate sensor, proximity sensor, and RBG light sensor. There is also the iconic ultrasonic in-display fingerprint sensor. However, the Apple iPhone XS has an accelerometer, ambient light sensor, barometer, proximity sensor, and a three-axis gyro. There is also the TrueDepth Camera system with IR sensors that enables Face ID support.

The Samsung Galaxy S10 packs a 3,400mAh battery and supports Fast Wireless Charging 2.0, Wireless PowerShare, and fast wired charging. Apple hasn't revealed the battery capacity of the iPhone XS. However, there is wireless charging support based on the Qi standard.