Samsung Taking a Leaf Out of Xiaomi, Oppo, Vivo's Playbook to Regain Market Share in India

Sometimes keeping ahead of the game means learning some tricks from rivals - a strategy Samsung Electronics Co hasn't been too proud to adopt in India where Xiaomi Corp and other Chinese brands have made hefty inroads.

Pages pulled from their playbooks include becoming savvier with online marketing to millennials as Samsung seeks to reinvent itself as a 'younger brand', as well as providing sales staff for smaller stores and even finding a new love for cricket with a sponsorship deal.

Combined with a slew of new models - many aimed at undermining Chinese dominance of the $150 to $300 (roughly Rs. 10,000 to 20,000) phone segment - the new tactics are paying off with the South Korean tech giant reclaiming the No. 1 spot in the second quarter.

"Samsung was living in a sort of denial of the threat that Xiaomi, Oppo, Vivo posed but now they've come out of the ostrich hole," said Rushabh Doshi, research manager at industry tracker Canalys. "Now they are fighting back, definitely."

Its Galaxy J6 launched in May and the J8 sold from July have been doing especially well, each selling 50,000 a day, says Samsung. In an appeal to millennials, the phones have a new "chat over video" feature which allows users to view videos without interruption even as they chat by text due to a transparent keyboard.

To be sure, Samsung has long dominated the premium end of the smartphone market in India and features like "chat over video", designed at its Indian R&D centre, underscore its tech prowess. It has also built up a wide retail network in the country.

But Samsung, which logged slower profit growth in April-June, knows it has to pull out the stops in India if it wants to avoid harsh lessons meted out in China.

Just five years ago, it had 20 percent of the Chinese market only to see that fall to less than 1 percent this year, outgunned by Huawei, Xiaomi, Oppo and Vivo, particularly on pricing. 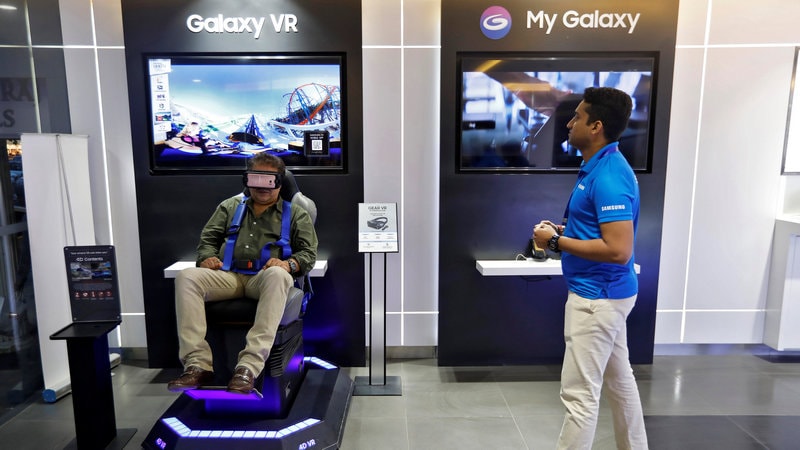 And India is too big a prize to lose - the world's No. 2 smartphone market with about 400 million users and worth an estimated $20 billion (roughly Rs. 1.36 lakh crores) annually.

It's also the world's fastest-growing major mobile phone market, expanding about 20 percent last quarter from a year earlier. For Samsung, India is its biggest market outside the United States and one where it has invested heavily, opening the world's biggest smartphone factory outside New Delhi last month.

But Chinese brands now account for every one in two phones sold in India with Xiaomi making the greatest strides. After its 2014 market entry, the "Mi" brand steadily gained share to knock Samsung from the top spot last December.

Although Samsung regained the title last quarter, it was only by a hair's breadth - 29 percent market share to Xiaomi's 28 percent, according to research firm Counterpoint. Samsung started selling three new phones in the quarter while Xiaomi had one product release.

Samsung's India unit did not respond to a request for comment on its strategies in the country.

To promote its $210 (roughly Rs. 14,400) Galaxy On6 smartphone launched last month, Samsung has eschewed traditional TV advertising. Instead it embarked on one of its most aggressive online campaigns, enlisting Bollywood heartthrob Tiger Shroff and uploading videos and photos to Facebook, Instagram, and Twitter.

"It's not just one ad which you'll see again and again. Because millennials will get bored. What we want to do is to engage them...and whichever platform they are on, we'll be there, Ranjivjit Singh, Samsung India's chief marketing officer, said in an interview.

But some analysts warn that Samsung will have to come up with creative social media strategies if it wants to maintain its lead over Chinese rivals and establish a stronger one.

"Chinese brands such as Xiaomi, OnePlus have built a strong presence in India by targeting the youth with grand fan festivals when they launch models," said Neil Shah, research director at Counterpoint.

Company sources said Samsung has increased spending on marketing but declined to say by how much. But with its deep pockets, it can afford to invest heavily - a strategy that competitors may struggle to match longer term.

In brick-and-mortar stores too, Samsung has had to step up to match its Chinese rivals.

Previously it only paid for a Samsung sales specialist for stores with monthly sales of more than Rs. 10 lakh ($14,600), but over the past year or so it has halved that threshold following similar actions by Oppo and Vivo, retail sources familiar with the matter told Reuters. They declined to be identified as they were not authorised to speak on the matter.

The sources also said Samsung was developing financing products independently of current tie-ups with financial firms - a move which could help it offer customers a smoother sales process and even lift profit margins.

But its rivals aren't standing still, moving further into the premium segment.

Huawei this year launched its flagship P20 Pro phone, which has three cameras, in India for about $950 in direct competition to Samsung's S9. Vivo this month started selling the NEX, which has a camera that pops out, for roughly $655.

"Chinese brands are launching these phones to prove that they don't just make phones for the lower end of the market, but that they are master innovators," Counterpoint's Shah said.