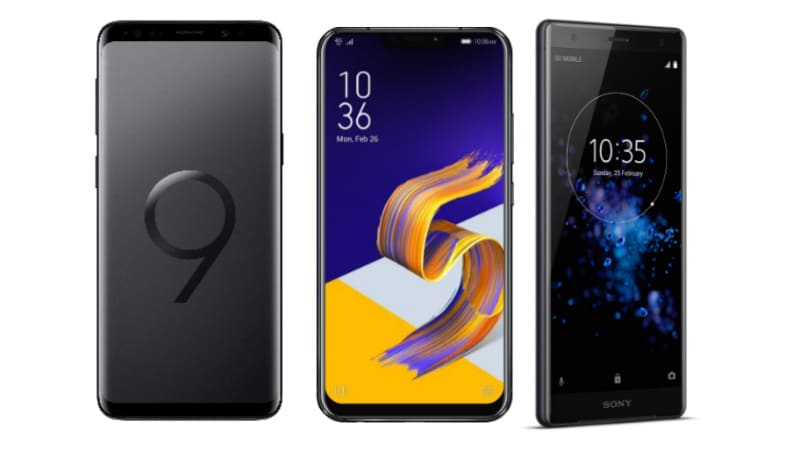 While the Samsung Galaxy S9 is yet to hit stores anywhere around the globe, Sony earlier this week brought the Xperia XZ2 and Asus recently unveiled the ZenFone 5Z to counter the upcoming Galaxy S flagship. Interestingly, all three smartphones come with a Qualcomm Snapdragon 845 SoC - of course, not the Indian version of the Galaxy S9 that will be available with an Exynos 9810 SoC. There are also other similarities, including base models with 4GB of RAM and Android 8.0 Oreo. The top-end models also come with premium builds in multiple colour options to convince a large number of customers. Here's our take on what are the key differences between the Samsung Galaxy S9, Asus ZenFone 5Z, and Sony Xperia XZ2.

Samsung Galaxy S9 price is set at $719.99 (approximately Rs. 46,600) for the 64GB variant, while the US price details of its 128GB and 256GB variants are yet to emerge. The smartphone will go on sale in select global markets starting March 16, though its pre-orders in India already live, and its launch is set for March 6 in the country. It will come in Midnight Black, Coral Blue, Lilac Purple, and Titanium Grey colour options.

The Asus ZenFone 5Z (ZS620KL) price, on the other hand, is set at EUR 479 (roughly Rs. 38,400) for its 4GB RAM, 64GB variant. There aren't any price details available for the 8GB RAM and 256GB storage variant. The smartphone will come in June in Midnight Blue and Meteor Silver colour options.

In contrast, the Sony Xperia XZ2 price is set at EUR 799 (approximately Rs. 63,700). It will go on sale starting next month in Liquid Black, Liquid Silver, Deep Green, and Ash Pink colour options.

India price details of the Asus ZenFone 5Z and Sony Xperia XZ2 haven't been announced. However, Gadgets 360 has learnt via retail sources that the Galaxy S9 India price in India is set at Rs. 57,900 for the 64GB variant, while its 256GB variant will be available in the country at Rs. 65,900.

The Android Oreo-based Galaxy S9 runs Samsung Experience 9.0 and features a 5.8-inch QHD+ Curved Super AMOLED display with an 18.5:9 aspect ratio. Under the hood, there is an octa-core Qualcomm Snapdragon 845 SoC for the US market (Exynos 9810 SoC for India and other global markets), coupled with 4GB of RAM. The smartphone comes with a Super Speed Dual Pixel 12-megapixel autofocus f/1.5-f/2.4 sensor with Optical Image Stabilisation (OIS). An 8-megapixel f/1.7 camera sensor is available on the front.

Samsung has provided an AR Emoji that competes against Apple's Animoji and lets users create their 3D virtual characters. Also, the Galaxy S9 has a super slow-mo camera mode that offers video recording at a speed of 960fps.

Compared to the Galaxy S9, the dual-SIM (Nano) Asus ZenFone 5Z runs Android 8.0 Oreo with the new ZenUI 5.0 and sports a 6.2-inch full-HD+ (1080x2246 pixels) display with a 19:9 aspect ratio and an iPhone X-like notch. The smartphone is powered by a Qualcomm Snapdragon 845 SoC along with AIE (Artificial Intelligence Engine) and Adreno 630 GPU, coupled with 4GB of RAM. It has a dual rear camera setup, with a primary sensor featuring a 12-megapixel Sony IMX363 sensor along with an f/1.8 aperture, 83-degree field of view lens, and an 8-megapixel secondary sensor along with an f/2.2 aperture, 120-degree wide-angle lens. An 8-megapixel camera sensor is available on the front with an f/2.0 aperture and 84-degree field of view lens. There is 3-axis EIS available for both front and rear cameras.

The Sony Xperia XZ2, in the meanwhile, comes in single and dual SIM (Nano) variants and runs Android 8.0 Oreo. The smartphone has a 5.7-inch full-HD+ (1080x2160 pixels) TRILUMINOS HDR display with X-Reality display engine and is powered by a Qualcomm Snapdragon 845 SoC, paired with 4GB of RAM. It sports a 19-megapixel Motion Eye rear camera with autofocus burst, 4K HDR video recording, and SteadyShot technology. On the front, there is a 5-megapixel camera sensor with a 23mm wide-angle lens and SteadyShot.

Sony has provided 64GB UFS inbuilt storage that is expandable via microSD card (up to 400GB). The Xperia XZ2 also has a list of connectivity options, including Wi-Fi, Bluetooth v5.0, GPS/ A-GPS, and USB Type-C (3.1). There is a 3180mAh battery with Qualcomm Quick Charge 3.0. Lastly, the handset measures 153x72x11.1mm and weighs 198 grams.