Share on Facebook Tweet Snapchat Share Reddit Email Comment
With the launch of Galaxy S III, the Indian market now has flagship devices from the two big Android smartphone mafuncaturers stacked up in the shelves. Both the devices have industry leading hardware specifications and come with host of software improvements over the vanilla Android 4.0. For a consumer looking to grab the best Android smartphone right now, which one of these is going to be a wise choice?

Design
No doubt HTC has done a great job while designing One X - the smartphone is a culmination of what the Taiwanese manufacturer has learnt over the years. Featuring a curved profile, the phone is made up of polycarbonate material, which Nokia has been using in its high-end devices. The device looks beautiful and is very functional in real-life usage.

Display
HTC started the trend of 720p display in smartphones with Rezound (released in the United States) and now every manufacturer is bringing HD display in their flagship devices. One X is company's second smartphone to sport a 720p screen. With Super LCD 2 technology underneath, the display in One X is one of the best around. It provides great viewing angles, and accurate colour reproduction.

Pentile or non-Pentile, Samsung is known for its AMOLED display technology and the last two Android flagships are the proof of this. Company has opted for Super AMOLED on Galaxy S III, as the Super AMOLED Plus with HD resolution wasn't ready for mass production. First seen on Galaxy Nexus, Super AMOLED HD display has improved quite a lot since then. However, the blueish tinge is still present and whites are a little off on the smartphone. HTC One X certainly beats Galaxy S in display category with a near perfect display. There are hardly any issues with One X display. 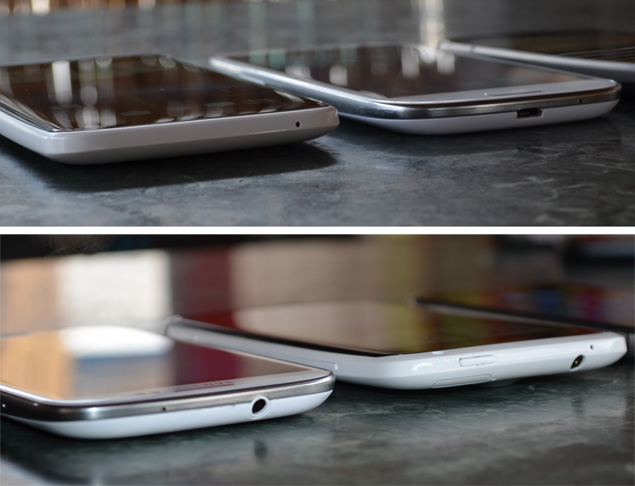 Performance
Quad-core processors are the latest craze in smartphones and HTC One X is the first smartphone to launch with NVIDIA Tegra 3 processor. Thanks to the quad core processor and 1GB RAM on-board, the performance is simply exceptional and there is no lag or sluggishness. Company has included an 1800mAh battery on the smartphone, which results in about a day backup on moderate use. It is not user-removable, which is a slight dampener.

Samsung has also gone for 1GB RAM and a quad-core processor in Galaxy S III; however it is company's own processor - Exynos 4 Quad. Similar to Exynos 4 dual in Galaxy S II, Exynos 4 quad simply blows the competition away, which also includes HTC One X. Thanks to the superfast processor on-board, Galaxy S III glides through the menus, homescreen, heavy webpages and more without showing any sign of strain. Samsung has opted for 2100 mAh user-removable battery, which would easily last a day on moderate usage. The user-removable battery on S III is another advantage that this Samsung flagship holds over One X.

Software/ UI
Pre-loaded with Android 4.0.3, HTC's One X comes with all new version of company's Sense UI. A refreshing upgrade from earlier versions of the user-interface, Sense 4 is toned down, which is a welcome improvement but a lot still needs to be done. Sense 4 is still a big memory hog and takes up big chunk of RAM, but thanks to the 1GB RAM on-board the performance isn't impacted that much in the real-life.

Similar to HTC, Samsung has also included its own user interface atop Ice Cream Sandwich, called TouchWiz Nature UX. Company has also included several other software features that are S III exclusive right now. Some of them are Direct Call, Smart Stay or S-Voice. While Direct Call and S-Voice work well, Smart Stay is somewhat hit and miss. There are other disappointments as well like the tweaked folder functionality. One other thing that also needs to be kept in mind is Samsung's poor track record with Android updates.

While both the smartphones have some positives and negatives on the user interface front, choosing a UI is more up to the personal taste, however the S III has a definite edge in terms of bundled software.

Camera
Cameras have suddenly become the topic of interest among smartphone manufacturers and some real work is visible in the new crop of devices hitting stores. HTC's One X is one of these devices with vastly improvement camera software and a great camera. HTC has also gone f/2.0 aperture, which improves the low light performance.

On the other hand, while the Galaxy S III may not have the best camera software as the company has stuck to the familiar looking interface, the optics are exceptional. The shots taken from 8MP out-perform almost all smartphones camera currently available in the market including One X.

Both the devices also come with front cameras, which give decent results.

Verdict
It is certainly a hard decision between HTC One X and Samsung Galaxy S III. While One X has better display and design, Galaxy S III scores on performance and camera front. Software and UI are left to personal preference. One last factor that plays an important role in the buying decisions is the pricing, which is a let-down for Galaxy S III. Samsung has priced Galaxy S III at Rs. 43,180, while One X is being sold for Rs. 37,899.

So, if pricing is a concern for you, HTC One X is certainly a better deal, but if you have a bigger budget, you might want to look at the Galaxy S III.