As the smartphone action shifts to the mass market, leaders Samsung Electronics Co Ltd and Apple Inc are under pressure to make their high-end phones more affordable to revive sales. And that may spell trouble for already-softening margins.

Samsung, which said on Tuesday it would likely post a second straight quarterly profit decline, has knocked around a tenth off the price of its Galaxy S5 in South Korea, in the first such move for a marquee smartphone launch - the S5 rolls out globally on Friday. And it's throwing in a free gift pack of media subscriptions and web apps worth 600,000 won.

The mass market - where a smartphone can be had for as little as $25 - is the new mobile device battleground, as high-end growth eases off with sales slowing in mature markets. Japan, for example, may see smartphone shipments shrink this year, according to researcher IDC.

Samsung's flagship S5 price cut suggests the South Korean firm wants to encourage users to trade up to a fancier phone - at a potential cost to its margins. Samsung's mobile business operating margin dipped to 16 percent in October-December from 18 percent over the whole of 2013.

"It reflects how much Samsung is agonizing to secure margins. They're now offering premium models at lower prices as the demand outlook for high-end phones remains uncertain," said Lee Seung-woo, an analyst at IBK Securities.

Premium smartphones tend to be priced at above $300 and pack in more features, such as more powerful processing power, high resolution display, better cameras and fingerprint reading. With the S5, which has few hardware improvements from its S4 predecessor, industry watchers reckon Samsung is aiming more at a broad mass market than tech savvy users.

To be sure, Samsung has a far broader product line-up than rival Apple, and it has some leeway to trim prices given that manufacturing costs have fallen. Lee Min-hee, an analyst at IM Investment, reckons the total cost of production materials for the S5 - from the battery and screen to the processor and sensors - will be 10-15 percent lower than for the S4.

While this allows vendors to make quality phones for less, it makes it tougher for them to maintain a premium brand image.

"Samsung needs to be very clear about the market segment it's pursuing," said Clement Teo, analyst at Forrester Research in Singapore. "Take Apple - it didn't drop prices on its iPhones, even with the new models. This helps it maintain a margin premium and attracts a certain loyal user base."

But Cupertino, California-based Apple is also taking note of the growing potential of the mass market. Internal documents revealed during an ongoing U.S. patent trial against Samsung indicates some at Apple felt the company priced itself too high. 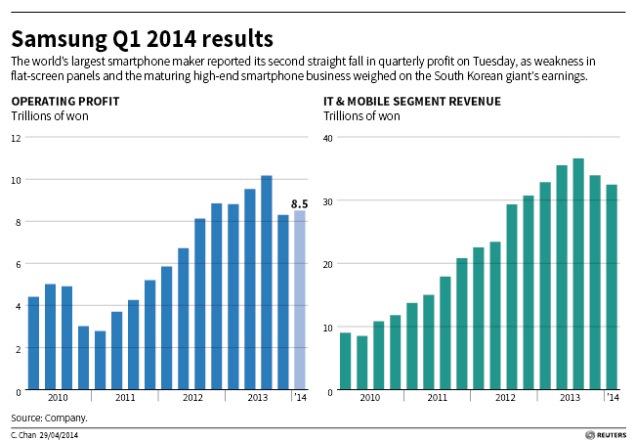 Less pricing change at Apple
According to an April 2013 presentation filed to a U.S. court, executives had debated plans for Apple's 2014 fiscal year and concluded that consumers wanted what it wasn't offering: cheaper phones - for less than $300 - and bigger screens.

It's unclear how representative that presentation is of Apple's mindset. Nor are there signs that Apple, which thrives on its premium positioning and plays down suggestions that it go mass-market, intends to deviate from its path.

"They are foregoing incremental revenue opportunities by not having a product that addresses that market," said BTIG analyst Walter Piecyk, adding that the main hope of investors now is that Apple produce a new product - a wearable device, say - to galvanize revenue growth.

The iPhone 5C, a colorful plastic model priced just $100 cheaper than its premium cousin, was aimed at emerging markets and marked a departure from Apple's focus on premium phones last year. But it's not been a spectacular success. Some analysts theorize that an unwillingness to sacrifice profitability meant the device wasn't priced cheaply enough.

A thinner slice
Apple's iPhone margins have crept south as the company packs more features into its gadgets, trying to stand out in an increasingly crowded field. As its market share dwindles, the company enjoys less leverage to squeeze suppliers. And margins may fall further if Apple introduces bigger screens as expected.

"With the iPhone 6, Apple is likely to stick to premium pricing as it's widely expected to come with a bigger screen and some innovative design tweaks," said Doh Hyun-woo, an analyst at Mirae Asset Securities. "They are unlikely to make as much change in pricing policy as Samsung does."

The average selling price of a smartphone globally is seen dropping by more than a fifth by 2018, to $260, according to IDC, as more buyers, especially in emerging markets, opt for price over brand, and as manufacturing costs continue to drop.

The iPhone remains the most expensive smartphone, with an estimated average selling price this year of $649, more than double the average price of $247 for Android phones, Samsung's mainstay products, according to IDC. Average selling prices of iPhones will drop only 6 percent to $610 by 2018, while Android prices will decline 18 percent to $202, according to those IDC forecasts.

"Apple has a clear strategy - to be the best in the market segment it competes in, and it has performed well," said Forrester's Teo. "Regardless of 5C sales, the bigger picture is that Apple is relevant to users in their moment of need - through an iPhone, iPad, iPod or its App store."

China chips away
All the while, competition from cheaper smartphone brands is getting fiercer. The share of smartphone shipments by vendors outside the top five - Samsung, Apple, Huawei, LG Electronics Inc and Lenovo Group - rose to 39.3 percent last year from 27.4 percent in 2011.

From Nokia to BlackBerry Ltd and a host of Chinese vendors, manufacturers are bringing out cheaper, stripped-down smartphones aimed at hundreds of millions of potential users in emerging markets such as China, India and Indonesia.

Chinese manufacturers - from global names such as Huawei and Lenovo to the less well known Gionee, Oppo and CorePad - are picking up market share as they acquire technical and design expertise to add to their low production costs.

"The winners in the current market conditions will be those who show the best cost-efficiency, and in that sense Chinese players will be in a better position," said IBK's Lee.