Redmi Note 7 Pro vs Samsung Galaxy M30: Which One Should You Buy?

The Rs. 15,000 segment has always been crucial in the Indian market, and a lot of manufacturers have tried to make their mark by offering good value-for-money smartphones in this price bracket. While it's good to have a lot of options, too much choice can get a little overwhelming. Two such options that are quite popular at the moment are the Xiaomi Redmi Note 7 Pro and the Samsung Galaxy M30. The Redmi Note 7 Pro has been in the news for the kind of performance it offers for the Rs. 13,999 price point. The Samsung Galaxy M30, on the other hand, is among the very few smartphones to sport a Super AMOLED panel at this price. So which one should you buy? We put the two head to head in a bid to help you decide.

While both these phones are available in the same price segment and are targeted at the same audience, the approach to design is a little different. With the Galaxy M30 (Review), Samsung has opted for a gradient finish which looks modern, but the body is made of plastic which doesn't feel as premium as the Redmi Note 7 Pro (Review). Xiaomi also offers gradient finishes along with a standard black variant, which we had for our review.

The build quality of the Redmi Note 7 Pro is significantly better, as Xiaomi has opted for Corning Gorilla Glass 5 at the back. While this looks and feels good, we found it to be a fingerprint magnet, needing us to wipe the phone multiple times each day. The Samsung Galaxy M30 manages to hide fingerprints better than the Redmi Note 7 Pro.

Both smartphones have waterdrop notches, and both displays span over 6 inches. These panels have thin bezels on the sides but the chins at the bottom are considerably thicker. Neither of these phones is waterproof, but the Redmi Note 7 Pro has a P2i hydrophobic coating which the company says will help it resist water splashes to some extent. 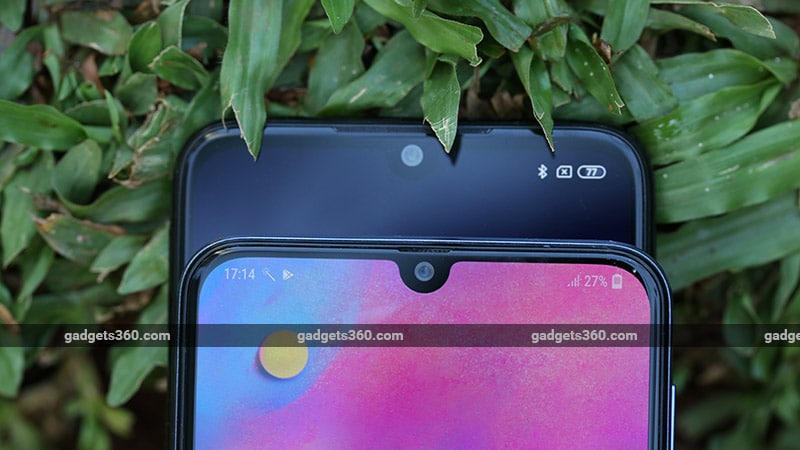 The volume and power buttons are positioned on the right for both smartphones, and are a bit hard to reach. The fingerprint scanners are positioned at the backs, but we found that the Redmi Note 7 Pro had a better placement while the Galaxy M30 needed us to move the phone in our hand.

Both phones have their SIM trays on the left. While both phones have dual SIM slots, the Galaxy M30 has a dedicated microSD card slot while the Redmi Note 7 Pro has to make do with a hybrid dual-SIM slot. Both these phones sport USB Type-C ports at the bottom, along with their loudspeakers.

Overall in terms of design, it is the Xiaomi Redmi Note 7 Pro that feels better built and uses more premium materials, which helps it score this point for design.

While these smartphones are in the same price segment, the hardware they sport differs to quite an extent. The Galaxy M30 has a 6.4-inch full-HD+ Super AMOLED display which is crisp and has good viewing angles. Xiaomi on the other hand has opted for a 6.3-inch full-HD+ LTPS display. While both panels are good, Samsung gets the edge here in terms of brightness and crispness.

Xiaomi has opted for the new Qualcomm Snapdragon 675 SoC which has eight Qualcomm Kryo 460 CPU cores that can run at up to 2GHz. The Redmi phone has the exact same RAM and storage configurations, but these variants are priced at Rs. 13,999 and Rs. 16,999 respectively. Storage is expandable by up to 256GB, but at the cost of dual-SIM functionality. 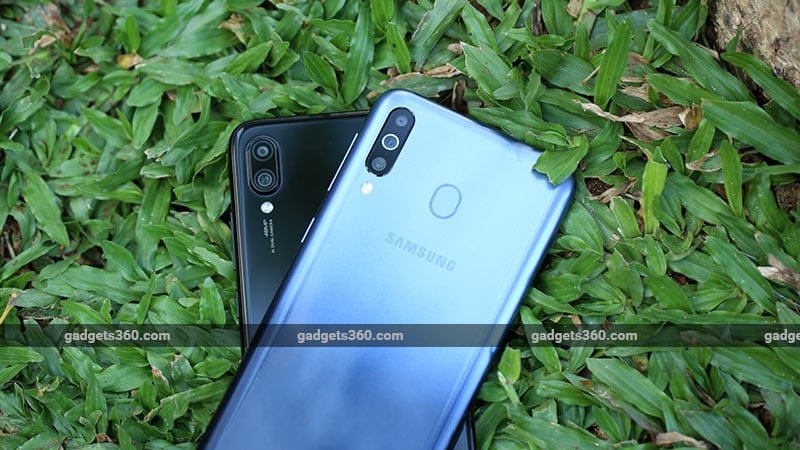 With a bigger 5000mAh battery, it is surprising that Samsung has managed to keep the weight down to 172g. The Redmi Note 7 Pro has a comparatively smaller 4000mAh battery but weighs 186g.

Software is where we see a bigger difference between the two competitors. The Galaxy M30 ships with the Samsung Experience 9.5 UI on top of Android 8.1 Oreo, which is now quite dated. It was running the February security patch when we reviewed it, which was acceptable. Xiaomi's Redmi Note 7 Pro ships with the latest MIUI 10 on top of Android 9 Pie, and it also had the February security patch.

Both UIs have a fair bit of customisation that deviate from stock Android. We found preinstalled apps and had to deal with spammy ads and notifications on both phones. Since the Redmi Note 7 Pro is on the latest version of Android, it gets a few points over the Galaxy M30. This could be a deciding factor for a few people.

Neither phone showed any signs of lag or stutter, and we had no trouble with basic day-to-day tasks and multitasking with a few apps in the background but the Samsung takes a little longer to do the same things. The Redmi Note 7 Pro feels snappier and can handle more load compared to the Galaxy M30.

We ran benchmarks on both these phones to see how much of a difference there is between them in terms of performance. Starting with the AnTuTu benchmark,the Redmi Note 7 Pro posted a score of 1,78,570 points, but the Galaxy M30 could only manage 1,07,495 points. In Geekbench 4, the Redmi Note 7 Pro managed 2,389 and 6,593 in the single-core and multi-core tests respectively. The Galaxy M30 scored less, with 1,328 and 4,171 in the exact same tests.

The Redmi Note 7 Pro also took the lead in graphics performance, and it managed to return 41fps and 15fps in GFXBench's T-Rex and Manhattan 3.1 scenes respectively. Samsung's Galaxy M30 scored 22fps and 7fps respectively in these tests. Clearly, the Xiaomi Redmi Note 7 Pro is significantly more powerful than the Samsung Galaxy M30.

The Xiaomi Redmi Note 7 Pro did get hot after playing for long durations, while the Galaxy M30 could keep its cool. We played a 15 minute match on both phones in identical conditions and observed that both showed a 2 percent battery drain at the end of it.

Battery capacities are different on these phones. The Galaxy M30 sports a bigger 5000mAh battery compared to the 4000mAh unit on the Redmi Note 7 Pro. Despite its bigger battery and Super AMOLED display, the Galaxy M30 delivered slightly poorer battery life in our HD video loop test. It managed 17 hours and 4 minutes, while in comparison the Redmi Note 7 Pro ran for 19 hours and 23 minutes in the exact same test.

With our normal usage, both phones managed to last over a day easily on a single charge. The Galaxy M30 has a slight edge when charging since the included 15W charger tops it up faster than the 10W Xiaomi charger.

We tested these phones together to see how they compare. The Redmi Note 7 Pro shoots at 12-megapixels by default while the Samsung returns 13-megapixel images. Both phones can meter light properly and lock focus quickly when shooting in daylight.

In landscape shots we noticed that the Xiaomi Redmi Note 7 Pro could manage sharper results, and objects at a distance were more recognisable. The Galaxy M30 could not get the same amount of detail as the Redmi Note 7 Pro. However, the Galaxy M30 does have a slight advantage when taking landscapes, as the wide-angle sensor can be used to fit more people or objects into a single frame, but we did notice a drop in quality. The Redmi Note 7 Pro can take full-resolution shots at 48-megapixels which have better detail, but the overall output was dimmer. 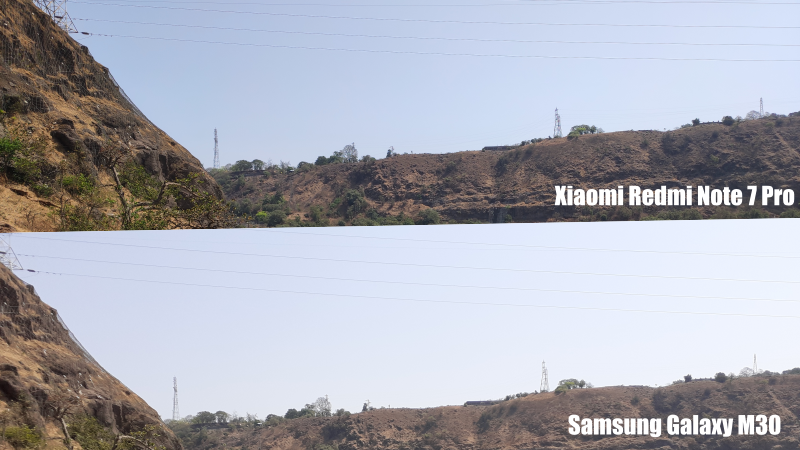 While shooting macros, we found that it was best to tap to focus on both phones, to ensure sharp results. Both phones managed good separation between the subject and the background, but the Redmi Note 7 Pro produced better details and better-defined edges. We noticed that macros taken with the Redmi Note 7 Pro had warmer hues and were less colour accurate. 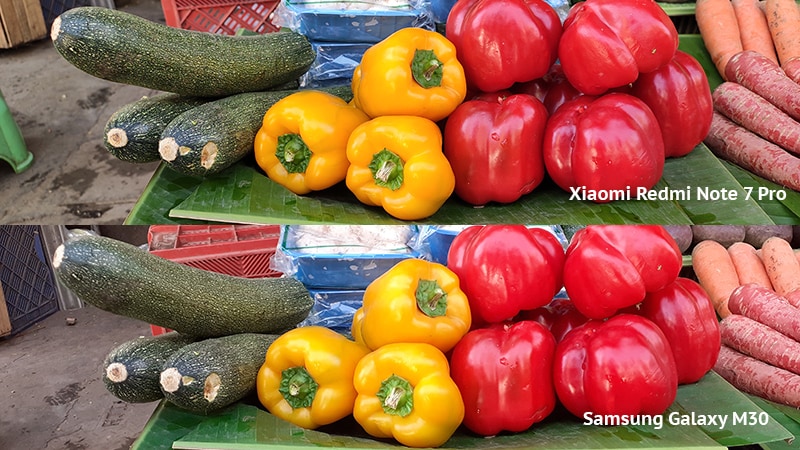 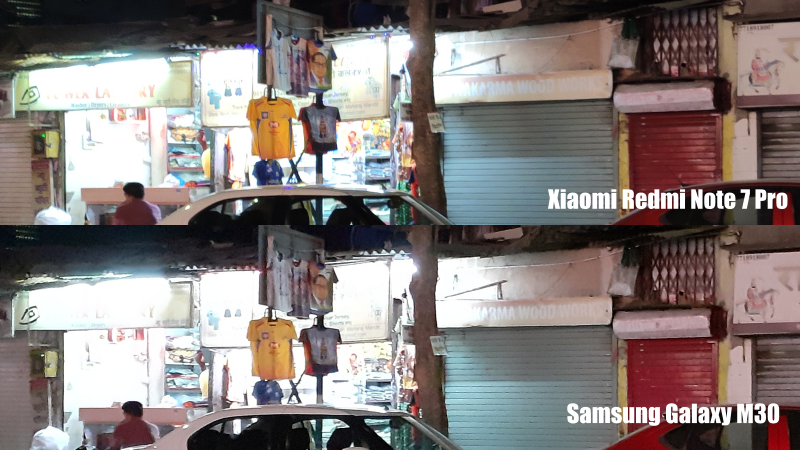 When taking portraits, we found that both phones could detected edges well, but the Galaxy M30 also gave us the option to adjust the level of blur before taking a shot. On the Redmi Note 7 Pro, we noticed that portraits taken with the AI Camera mode enabled were better than those taken without it. 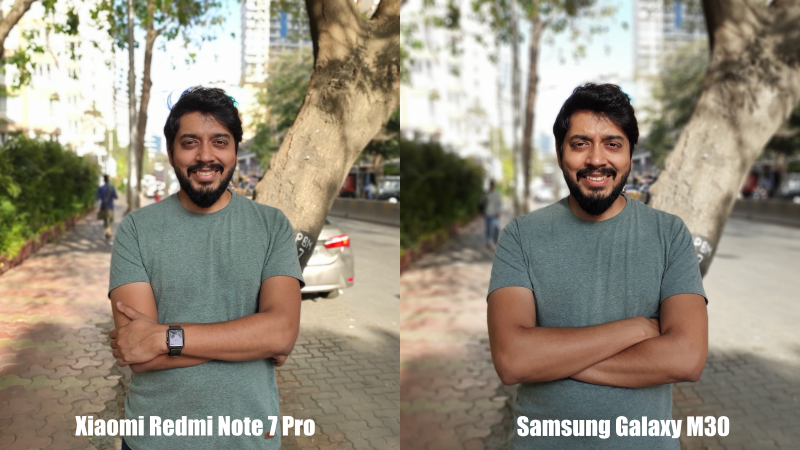 Selfies taken with both phones were sharp and good enough to go on social media directly. Beautification options as well as filters are available on both devices, and you can tweak the levels before taking your selfie.

Verdict
These two smartphones are pretty much the best that Samsung and Xiaomi have to offer in the sub-Rs. 15,000 segment, but when compared against each other they bring pretty different stuff to the table. The Redmi Note 7 Pro (Review) is more powerful, offers better cameras, has more up-to-date software, and is actually priced lower. However, the smartphone has the tendency to heat up when stressed.

What the Samsung Galaxy M30 has going for it is its excellent Super AMOLED panel and battery life that's as good as the Redmi Note 7 Pro, in addition to the fact that it runs cooler. So if those are the attributes you care about the most, pick up the Galaxy M30. But overall, the Redmi Note 7 Pro seems to be more rounded pick. Sadly, getting your hands on one won't be easy, since it's only available in limited quantities through periodic flash sales, and has been going out of stock very quickly each time.

Further reading: Xiaomi, Samsung, Redmi Note 7 Pro, Redmi Note 7 Pro price in India, Samsung Galaxy M30, Samsung Galaxy M30 Price in India
Aditya Shenoy Email Aditya Aditya Shenoy reviews smartphones, wearables, headphones and speakers for Gadgets 360, out of Mumbai. Aditya is a reviewer for Gadgets 360 and has written extensively about smartphones, software updates, and upcoming devices. Aditya is available on Twitter at @adishenoy, and you can mail him at adityashenoy@ndtv.com, so please send in your leads and tips. More
Mi Soundbar Review
Xbox One and PC Exclusive Cuphead Announced for Nintendo Switch

Redmi Note 7 Pro vs Samsung Galaxy M30: Which One Should You Buy?
Comment
Read in: हिंदी