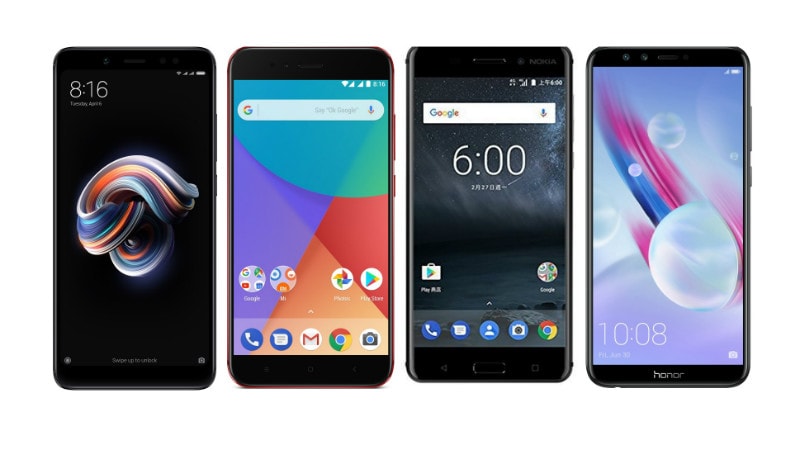 Xiaomi Redmi Note 5 Pro will go on sale in India on Thursday, February 22 alongside the Redmi Note 5 and Mi TV 4. With the new Redmi Note 5 Pro, Xiaomi is aiming for the sub-Rs. 20,000 segment, offering features such as a large, bezel-less display and dual rear camera setup on the back, along with a big battery. While the Redmi Note 5 Pro price in India starts at Rs. 13,999 for the 4GB RAM variant, it will be the 6GB RAM model that may be a more enticing option for the Indian consumer as there are not many smartphones with as much RAM under Rs. 18,000 in the market at present. Nonetheless, both variant will find enough space in the affordable segment to make their mark.

We can safely say Xiaomi has launched what looks like a solid package on paper to take on other contenders under the same price bracket, including the Honor 9 Lite 4GB RAM variant. The base variant of the new Redmi Note handset has also apparently influenced other smartphone companies to bring new 4GB RAM models to survive in the market. HMD Global is the first such company, launching the Nokia 6 4GB RAM, 64GB storage variant in the Indian market to compete against the Redmi Note 5 Pro. Moreover, it is interesting to see that the new Xiaomi phone is making the competition tougher for the Mi A1, which is an existing hot-selling model by the Chinese brand, launched last year in collaboration with Google as a new Android One handset.

We take a look at the Redmi Note 5 Pro price in India, specifications, and features and compare them with those of the Mi A1, Nokia 6, Honor 9 Lite to help you decide the best option for you.

The Redmi Note 5 Pro price in India is set at Rs. 13,999 for the variant with 4GB RAM and Rs. 16,999 for the 6GB RAM option. Both variants will go on sale beginning February 22 via Flipkart, Mi Home, and Mi.com. After some time, they will also be available for purchase through Xiaomi's offline retail partners in the country. The smartphone comes with an ultra-slim case bundled, while Jio is giving a cashback worth Rs. 2,200 and 100 percent additional data. Further, colour options for the Redmi Note 5 Pro include Black, Gold, Lake Blue, and Rose Gold colours.

Xiaomi launched the Mi A1 back in September last year with a price tag of Rs. 14,999, though it received a price cut and is currently available at Rs. 13,999. This Android One smartphone is available for purchase through various online and offline channels in the country, including Flipkart, Mi.com, Sangeetha, Poorvika, Big C, LOT, and UniverCell among others. It comes in various colour options, including Black, Gold, Rose Gold, and the Special Edition Red.

The Nokia 6, packing 3GB RAM, arrived in India in June last year with a price tag of Rs. 14,999. But its 4GB variant, which HMD Global has just launched in the country, comes at Rs. 16,999 - the same as that of the Redmi Note 5 6GB RAM variant's price in India. The new Nokia 6 model will be exclusively available for purchase via Flipkart starting February 20. The company is not offering any goodies on the new launch, but there is an exchange discount worth Rs. 2,000. The handset will come in a single colour option: Matte Black.

Coming towards the Honor 9 Lite, this new smartphone by Huawei brand Honor was launched in India last month. The Honor 9 Lite 4GB RAM variant is available at Rs. 14,999 via Flipkart and comes in three colour options, including Sapphire Blue, Glacier Grey, and Midnight Black. It comes with a complimentary back cover, and customers making orders through Citibank credit and debit cards are entitled to receive 10 percent cashback.

The dual-SIM Xiaomi Redmi Note 5 Pro runs Android Nougat-based MIUI 9. The smartphone features a 5.99-inch full-HD (1080x2160 pixels) display with an 18:9 aspect ratio, 450-nit brightness, 83 percent NTSC colour gamut, and 2.5D curved glass. It is powered by an all-new, octa-core Qualcomm Snapdragon 636 SoC, which is clocked at up to 1.8GHz, paired with Adreno 509 GPU. The new processor is touted to make the smartphone the "fastest Redmi Note ever" with an AnTuTu score of 109,692.

In terms of connectivity, the Redmi Note 5 Pro has 4G VoLTE, Wi-Fi 802.11 b/g/n, Bluetooth, 3.5mm headphone jack, and Micro-USB. There is a fingerprint sensor on the back that supports multiple fingerprint profiles. The handset packs a 4000mAh battery that is claimed to deliver up to 14 hours of continuous video playback. The battery supports 5V/2A fast charging technology. Besides, the handset measures 158.6x75.4x8.05mm and weighs 181 grams.

The dual-SIM (Nano) Xiaomi Mi A1, on the other side, was debuted with Android 7.1.2 Nougat but received an update to Android 8.0 Oreo last month. The smartphone has a 5.5-inch full-HD (1080x1920 pixels) display with 16:9 aspect ratio and Corning Gorilla Glass protection. It has a Qualcomm Snapdragon 625 SoC under the hood, coupled with 4GB of RAM. The handset has a dual rear camera setup with two 12-megapixel image sensors - one in 1.25-micron pixel size and with a wide-angle, f/2.2 aperture lens and the other one in 1-micron pixel size and with an f/2.6 aperture telephoto lens. The camera sensor also offers 2x optical zoom and features such as a proprietary Portrait Mode. Also, a 5-megapixel camera sensor is available on the front with a real-time beautification mode.

Xiaomi has provided 64GB inbuilt storage on the Mi A1, expandable via microSD card (up to 128GB) that comes in a hybrid dual-SIM configuration. The smartphone has 4G VoLTE, dual-band Wi-Fi 802.11ac, GPS/ A-GPS, USB Type-C, and a 3.5mm headphone jack on the connectivity front. There is also a front-facing fingerprint sensor that also works as a home button. Lastly, it packs a 3080mAh battery and has audio enhancements including a 10V smart power amplifier, DHS Audio Calibration Algorithm.

Similar to the Xiaomi Mi A1, the dual-SIM (Nano) Nokia 6 was launched with Android Nougat but received an update to Android 8.0 Oreo recently. The smartphone features a 5.5-inch full-HD display with 2.5D curved Corning Gorilla Glass protection. It is powered by an octa-core Qualcomm Snapdragon 430 SoC. The smartphone has a 16-megapixel rear camera sensor and an 8-megapixel front camera sensor. Both sensors have an f/2.0 aperture.

The Nokia 6 4GB RAM variant comes with 64GB of inbuilt storage that is expandable via microSD card (up to 128GB). The handset has usual connectivity options such as 4G VoLTE, Wi-Fi, Bluetooth, GPS/ A-GPS, Micro-USB, and a 3.5mm headphone jack. There is a front-facing fingerprint sensor. The smartphone also has stereo speakers with Dolby Atmos audio enhancement. Besides, it packs a 3000mAh battery.

Contrary to the other three handsets, the dual-SIM (Nano) Honor 9 Lite runs Android 8.0 Oreo-based EMUI 8.0 out of the box and features a 5.65-inch full-HD+ (1080x2160 pixels) IPS display with 18:9 aspect ratio. The smartphone is powered by an octa-core Huawei HiSilicon Kirin 659 SoC and has four camera sensors on the front and back sides. The dual camera setups on the front and back have 13-megapixel primary and 2-megapixel secondary camera sensors alongside a rear-facing LED flash and PDAF system.

The Honor 9 Lite 4GB variant has 64GB of inbuilt storage that is expandable via microSD card (up to 256GB) in a hybrid dual-SIM configuration. The handset has 4G VoLTE, Wi-Fi 802.11 b/g/n, Bluetooth, GPS/ A-GPS, Micro-USB with OTG support, and a 3.5mm headphone jack. There is also a rear-facing fingerprint sensor. At last, there is a 3000mAh battery that is claimed to deliver a talk time of up to 20 hours on a 3G network.