Realme X2 vs Redmi Note 8 Pro: Which One to Buy?

Just after the launch of the Realme XT, Chinese smartphone maker Realme announced that it was working on a more powerful version called the Realme XT 730G. When the device was finally launched in India this week, it had been renamed to Realme X2. This new smartphone not only packs a powerful Qualcomm Snapdragon 730G SoC, but also has a quad-camera setup at the back.

Realme is positioning this phone against its closest competitor Xiaomi's Redmi Note 8 Pro. This phone also packs in powerful hardware and four rear cameras, and has proven to be extremely popular. So which one should you put your money on? We put the Realme X2 and the Redmi Note 8 Pro in a head-to-head comparison to find out. Both these smartphones have USB Type-C ports at the bottom, along with their primary microphones, 3.5mm headphone jacks, and loudspeakers. The Redmi Note 8 Pro has an IR emitter on the top, which the Realme X2 lacks. Overall, it's the Realme X2 that wins in terms of design thanks to better button positioning, an in-display fingerprint scanner, and overall look and feel. 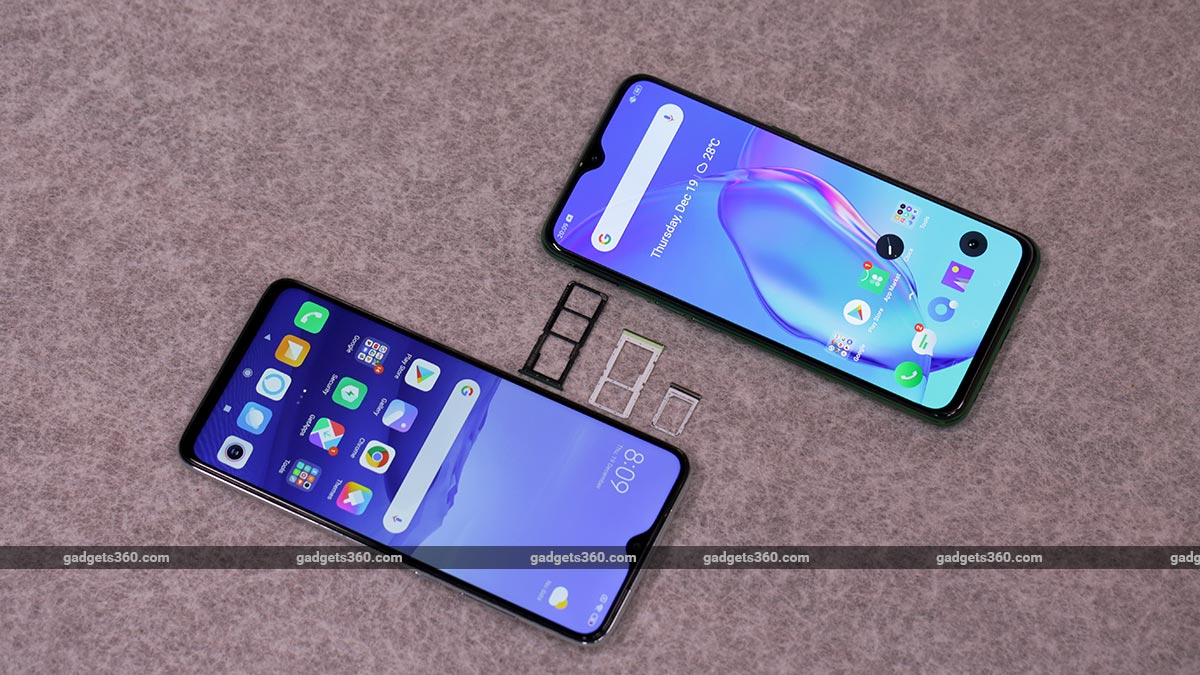 You get UFS 2.1 storage with both smartphones, along with the option for storage expansion. The Realme X2 packs a much better AMOLED display compared to the HDR LCD display on Xiaomi's device.

Both smartphones run Android 9 Pie with their custom UIs on top. The Redmi Note 8 Pro now runs MIUI 11, while the Realme X2 gets Color OS 6.1, which we also saw on the Realme X2 Pro. You can read about these UIs in detail in our full reviews of these respective smartphones. We preferred ColorOS because it was less intrusive in terms of notification spam.

We were curious to see which smartphone would get the upper hand in terms of raw performance. The Snapdragon 730G SoC and the MediaTek Helio G90T are both powerful processors. We had the top-of-the-line 8GB RAM variants of both devices for this comparison, making things a little more fair.

When using the two smartphones side-by-side we preferred the display of the Realme X2, which exhibited better blacks and punchier colours. We found that both devices are capable of delivering smooth user experiences without any lag or stutter. With 8GB of RAM on board, neither of these devices had any issues with multitasking.

We ran our usual benchmarks to gauge the performance of these smartphones. In AnTuTu, the Redmi Note 8 Pro managed to score 2,87,943 which is higher than the 2,67,419 scored by the Realme X2. In Geekbench 5, the Redmi Note 8 Pro scored 487 and 1,636 in the single-core and multi-core tests respectively, whereas the Realme X2 exceeded those scores with 545 and 1,712 in the same tests. Playing PUBG Mobile on both phones was a breeze, as both defaulted to the game's high preset. We did not notice any stutter or lag on either device. After playing the game for about 30 minutes, we found that the Redmi Note 8 Pro was warmer than the Realme X2, but the difference wasn't huge.

However, here's where things change. The smaller battery along with the more powerful bundled fast charger helps the Realme X2 charge a lot quicker than the Redmi Note 8 Pro. It got to 60 percent in 30 minutes, while the Redmi Note 8 Pro could only get to 32 percent in the same amount of time. With our usage, both smartphones lasted about a day and a half, but the Realme X2 has the edge here thanks to quicker charging – as long as you have a VOOC compatible charger available.

These two smartphones have identical quad-camera setups consisting of a 64-megapixel primary camera, an 8-megapixel wide-angle camera, a 2-megapixel macro camera, and a 2-megapixel depth sensor. For selfies, the Realme X2 has a 32-megapixel front camera while the Redmi Note 8 Pro packs in a 20-megapixel one. 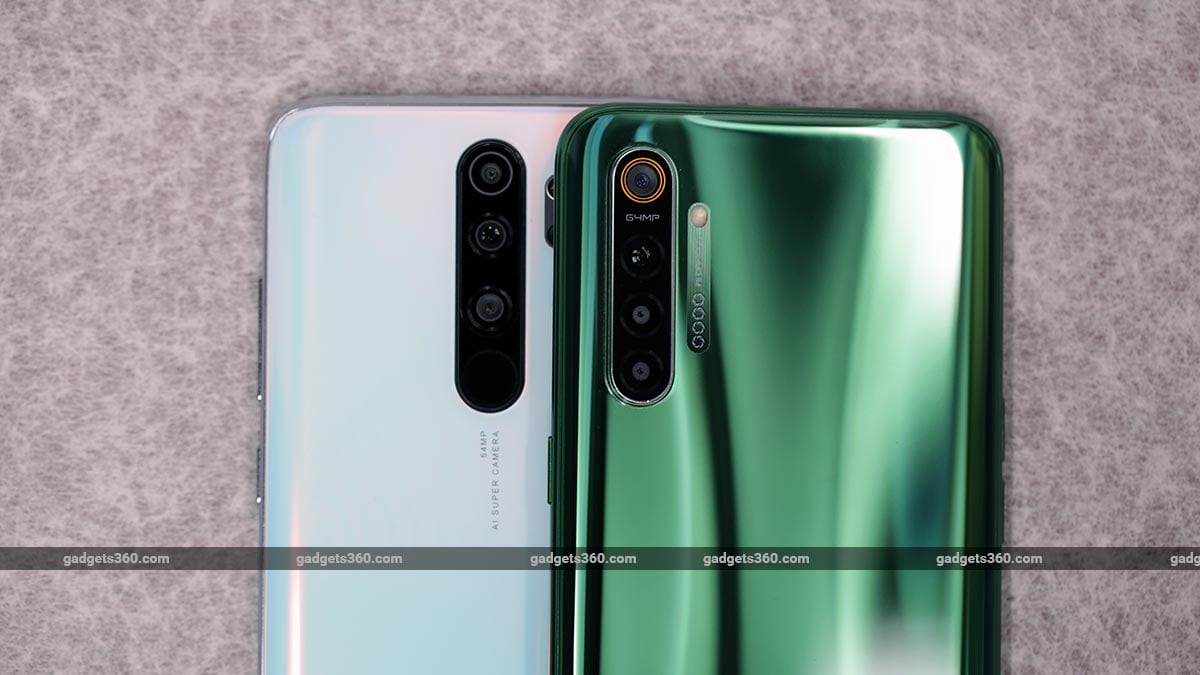 Both devices sport quad-camera modules at the back

The camera apps of both these smartphones are easy to use. The Redmi Note 8 Pro has a quick toggle to switch to the Macro camera, while the Realme X2 lists it under a different sub-menu for camera modes. 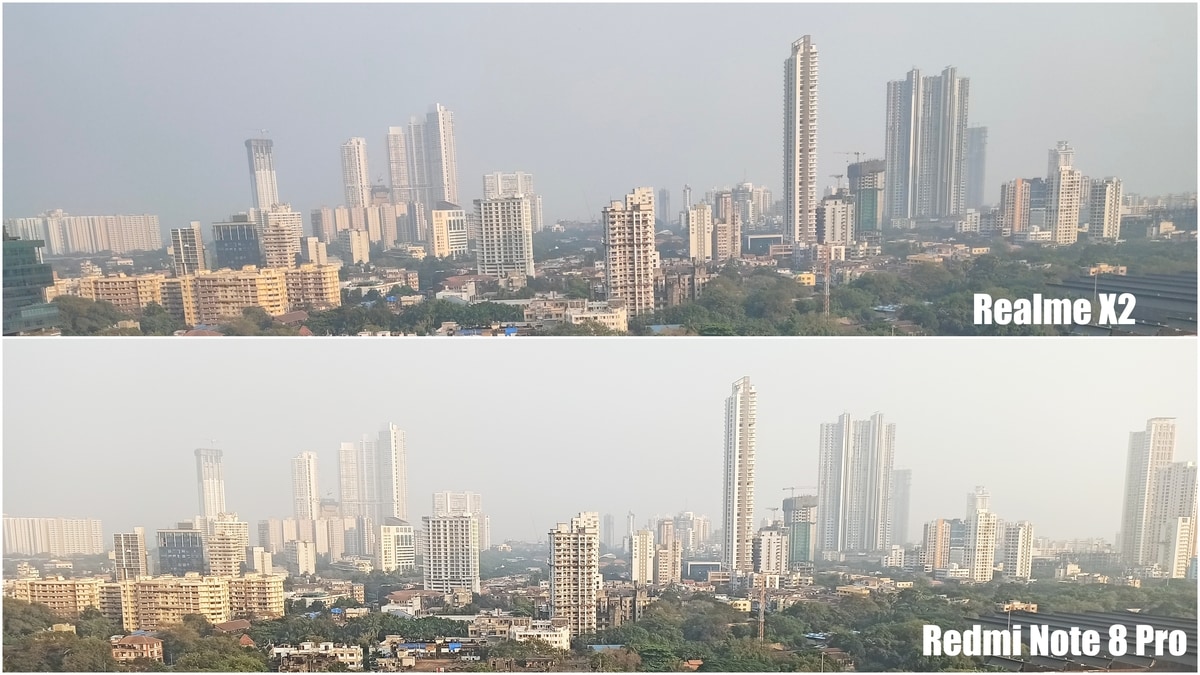 In daylight, the Realme X2 manages to meter light better and sets the exposure right quickly, whereas we observed the Redmi Note 8 Pro overexposing backgrounds slightly. On zooming in to shots we'd taken with both phones, we did notice that the Redmi Note 8 Pro bumps up the sharpness and contrast which the Realme X2 doesn't do. The wide-angle cameras on both smartphones let you capture a wider field of view but there is noticeable distortion at the edges in the output. The Redmi Note 8 Pro sharpens photos here as well, which we don't like. 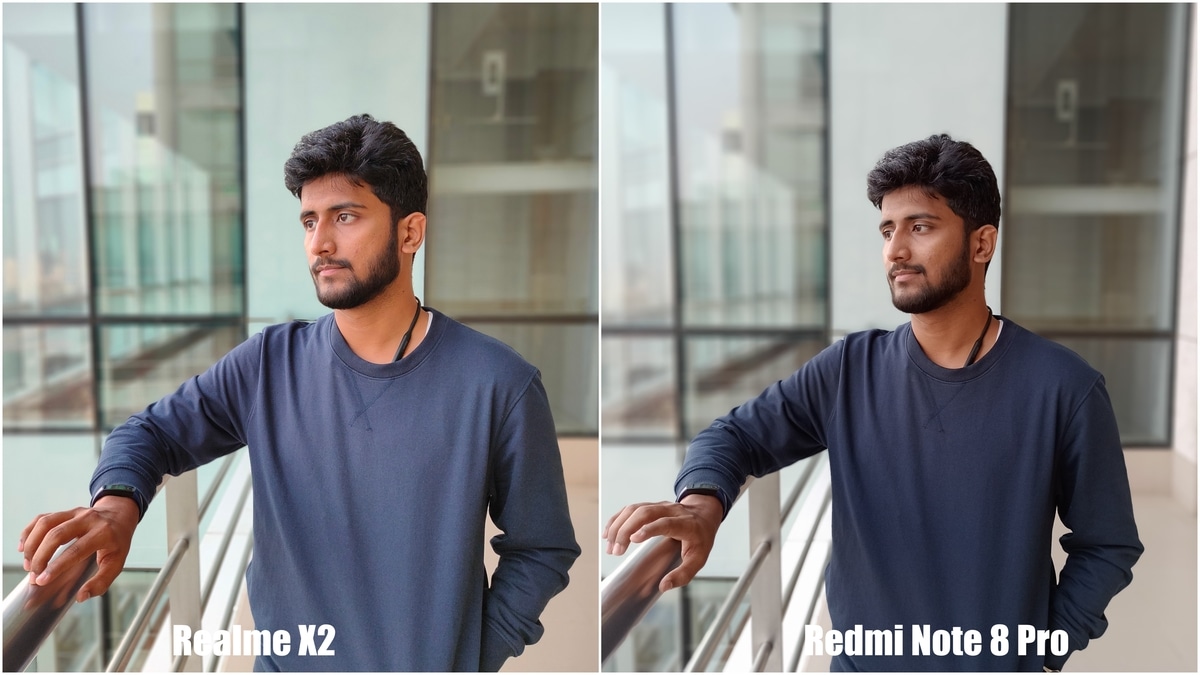 For portraits, both phones managed good edge detection but we liked the output of the Redmi Note 8 Pro, as the Realme X2 had a slightly inaccurate colour tone. 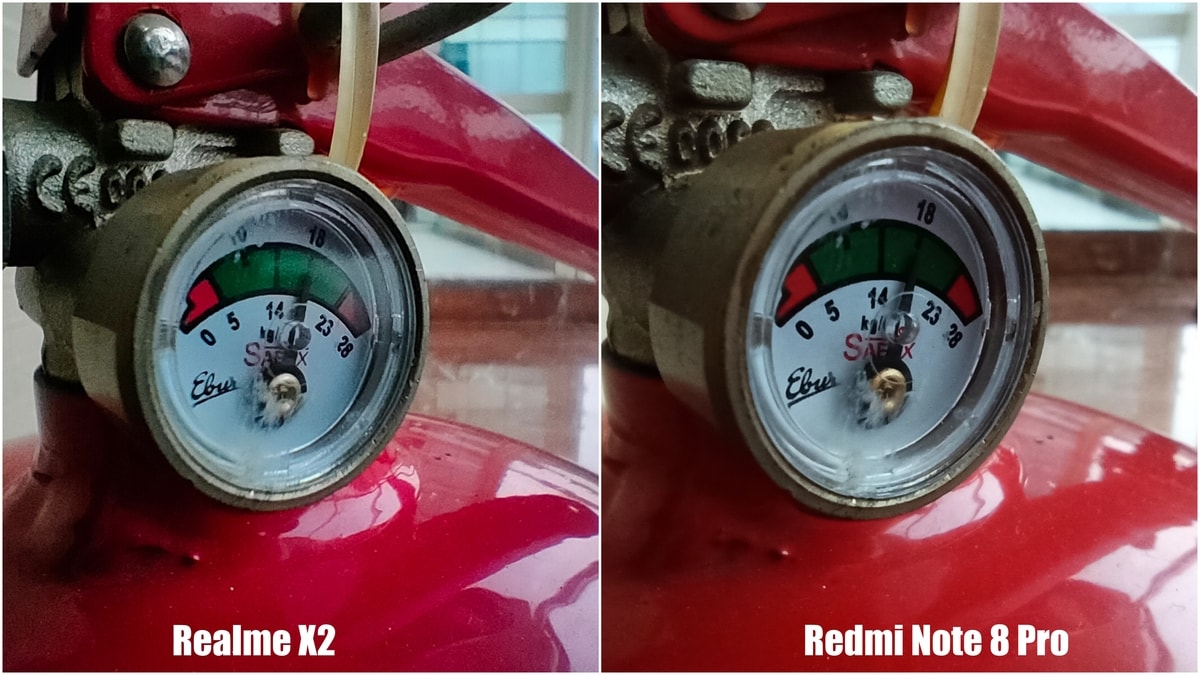 For macro shots, we preferred the Redmi Note 8 Pro, as it managed better details than the Realme X2 which delivered slightly grainy output. 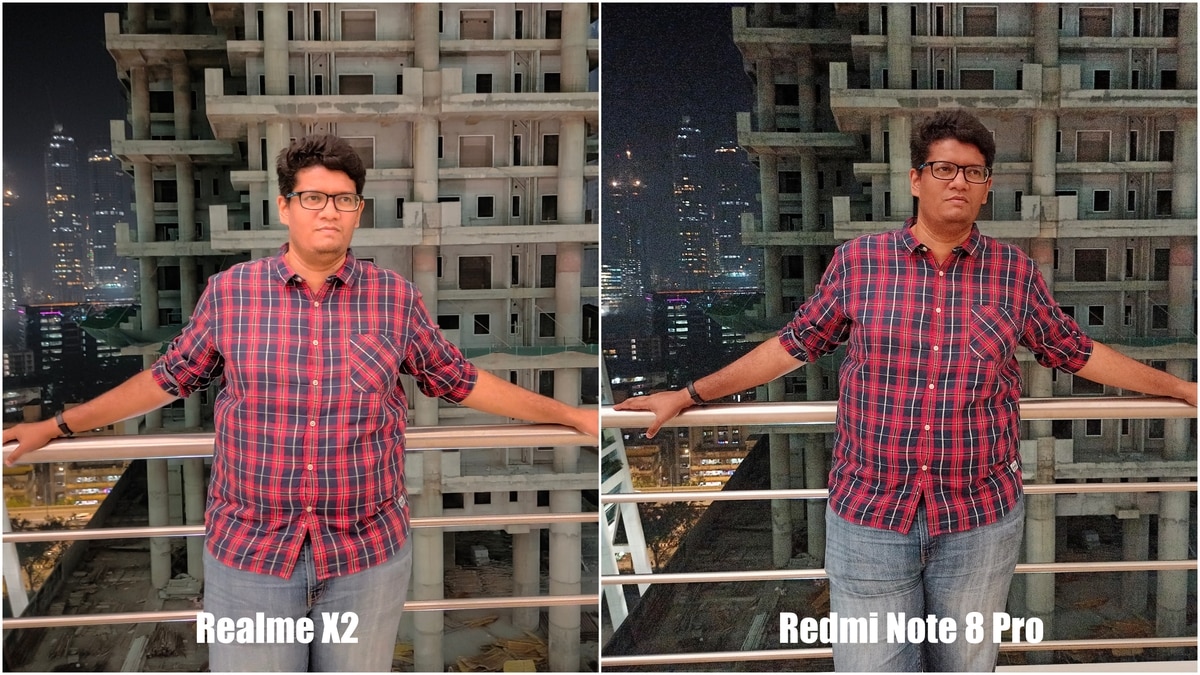 In low light, we noticed that shots taken with the Redmi Note 8 Pro had visible grain whereas the Realme X2 managed to keep that more under control. Portraits shot in low light on both smartphones were similar, with good edge detection, but the Realme X2 had a colour tone that was a little too warm. 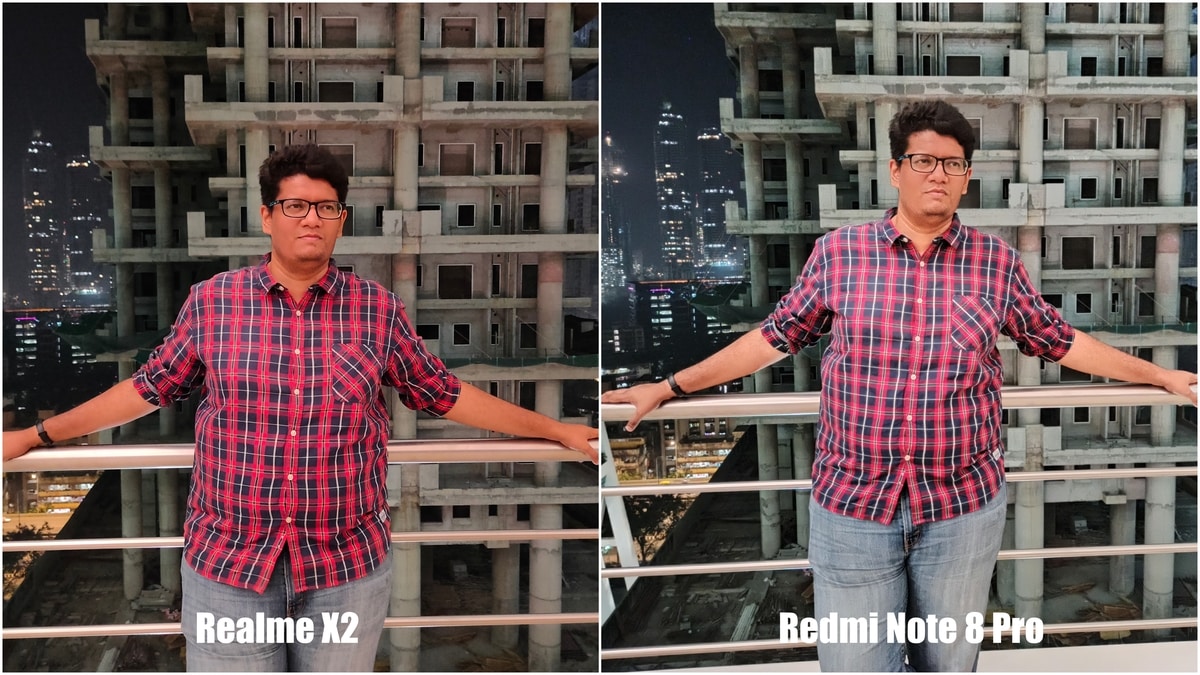 Photos shot with night mode on each phone were brighter and had better detail, but here too the Realme X2 had a slightly warmer colour tone. 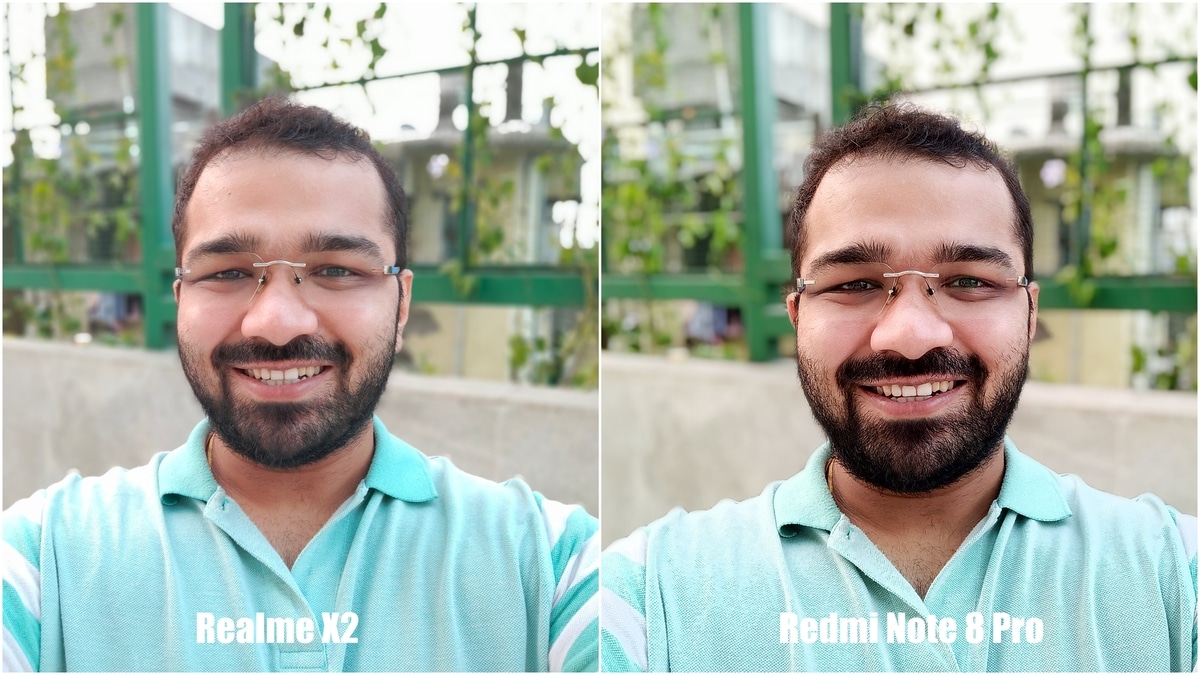 Selfies taken with the Realme X2 were better than those from the Redmi Note 8 Pro, which sharpened them excessively, crushing blacks.

With Xiaomi and Realme fighting it out in every segment, it is consumers who are reaping the benefits. Both the Realme X2 and the Redmi Note 8 Pro pack powerful hardware that lets them tackle anything you throw at them. We managed to get good battery life out of both these devices, but the Realme X2 did have a slight edge here thanks to its faster charger.

While both smartphones have identical camera configurations, their outputs isn't exactly the same. Xiaomi goes overboard with the sharpening in daylight while Realme delivered a warmer colour tone. It isn't easy to declare a winner in terms of camera performance, like we did in our Realme XT and Redmi Note 8 Pro comparison.

You can't go wrong with either of these two phones, but if you are on a tight budget, the Redmi Note 8 Pro offers better bang for the buck thanks to its lower starting price and higher amount of RAM. There is a Rs. 2,000 difference between the top-end variants, and if you are willing to pay the premium, the Realme X2 is worth the additional money.

Realme X2 vs Redmi Note 8 Pro: Which One to Buy?
Comment