Poco created a lot of fanfare and hype around its new M2 Pro smartphone, but it turned out to be little more than a rebranded Redmi Note 9 Pro. I wouldn't call this a bad thing, as there's now a second way to get your hands on a Redmi Note 9 Pro if you miss Xiaomi's flash sales. Considering that Poco's last launch was the X2, which raised expectations for a sub-Rs. 20,000 smartphone, I was hoping it would do the same at a lower price too.

Anyway, back to the matter at hand. The Poco M2 Pro (Review) has some stiff competition under Rs. 15,000, the biggest being the Redmi Note 9 Pro (Review) and the Realme 6 (Review). In our earlier comparison between the latter two phones, I found the Realme 6 to be the better pick of the two. Now, with Poco entering the scene, has the status quo changed?

The Poco M2 Pro uses the exact same body as the Redmi Note 9 Pro, and both are built equally well, keeping them on an equal footing. The design still looks fresh and interesting, compared to the slightly dull Realme 6. Both Poco and Redmi smartphones also have Gorilla Glass on their backs, giving them a premium feel, compared to the laminated back of the Realme 6. However, the latter is slightly less wide and tall, and is lighter too, making it a little more comfortable to handle. 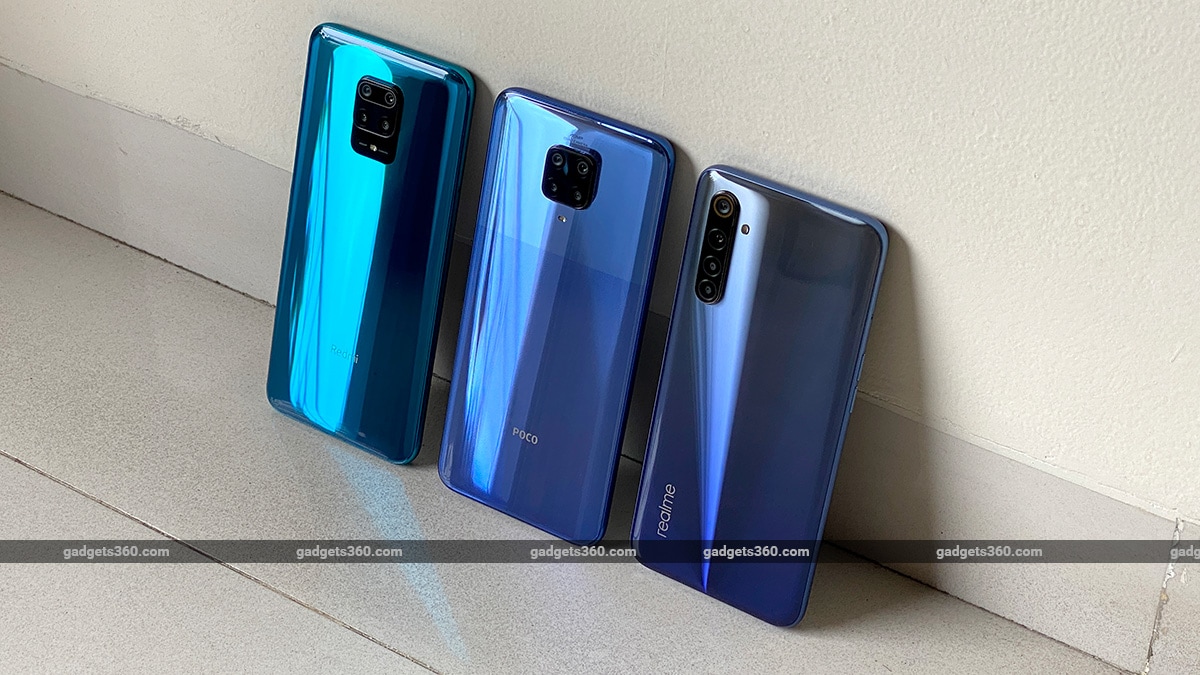 All three phones have full-HD+ displays, with hole-punch cutouts and Gorilla Glass protection. They are also rated to be splash resistant. You get a single speaker, a USB Type-C port, and a headphone jack on all phones. The Poco M2 Pro and Redmi Note 9 Pro also feature an infrared emitter, which can come in handy if you misplace any of your appliances' remotes. You get side-mounted capacitive fingerprint sensors on all three phones, and they all do a good job of quickly authenticating you.

While the displays on all three smartphones produce lively colours and can get quite bright, the Realme 6 has an advantage over the two with its 90Hz refresh rate. It's still the only phone under Rs. 15,000 to offer this feature. It makes scrolling through menus feel a bit more snappy and lets you game at a higher framerate in supported titles.

I think the Poco M2 Pro and Redmi Note 9 Pro are better overall when it comes to design, but the Realme 6 still has the upper hand with its snappier display. `

The Poco M2 Pro, Redmi Note 9 Pro, and Realme 6 run on custom versions of Android 10. Poco and Redmi use MIUI, while Realme uses Realme UI. Both custom skins offer plenty of options to customise their look and feel. You can set a custom theme, change the icons and font style, and enable custom dynamic wallpapers for the lockscreen.

MIUI has the tendency to clutter your notification shade with unsolicited notifications from stock apps, more so than Realme UI. However, there is a way to drastically reduce this, if you follow our guide on disabling ads in MIUI 11. Recently, privacy concerns have surfaced around MIUI's Security app, as it accesses the microphone, SMS app, contacts, location data, and other things without explicitly asking for user permission. There doesn't seem to be any way to revoke these permissions either. This affects the Redmi Note 9 Pro and Poco M2 Pro, since they both have all the stock MIUI apps preinstalled.

Here, I'd go with Realme UI as it's just as feature-packed as MIUI, without any known niggling privacy concerns.

The Poco M2 Pro and the Redmi Note 9 Pro use Qualcomm's Snapdragon 720G SoC, which is powerful for this segment. The Realme 6 uses MediaTek's gaming-oriented Helio G90T SoC. Both perform similarly in benchmarks and are equally capable of handling multitasking and heavy gaming. I noticed that the Realme 6 got a little hotter than the Poco and Redmi with long gaming sessions, but not enough to make me stop playing.

All three phones offer good quality display panels, and watching videos is very enjoyable on each of them. If you typically use your phone's speaker for media playback, then you'll like the Realme 6 more as it sounds louder and richer compared to the others.

Battery life is also equally satisfactory across all devices. The Realme 6 has the lowest capacity battery of the lot, but it surprisingly lasted the longest in our HD video loop test, almost touching 20 hours. With normal use, I had no trouble using all three phones for more than a day. A lot of the time, I was able to easily use them for a day and half on a single charge when usage was lighter.

Speaking of charging, the Realme 6 and the Poco M2 Pro have the Redmi Note 9 Pro beat as they both ship with much faster chargers in the box. The Realme 6 comes with a 30W fast charger, while the M2 Pro ships with a 33W fast charger. In fact, this is probably the only real major difference between the Poco M2 Pro and the Redmi Note 9 Pro, which are otherwise identical.

The Poco M2 Pro and Redmi Note 9 Pro appear to have the same camera setup. This includes a rear primary 48-megapixel sensor, an 8-megapixel sensor with a wide-angle lens, a 5-megapixel macro camera with autofocus, and a 2-megapixel depth camera. Both have 16-megapixel selfie cameras. The main difference between the two phones is a software feature – right now, is that the M2 Pro supports Night mode for the selfie camera, while the Note 9 Pro does not. 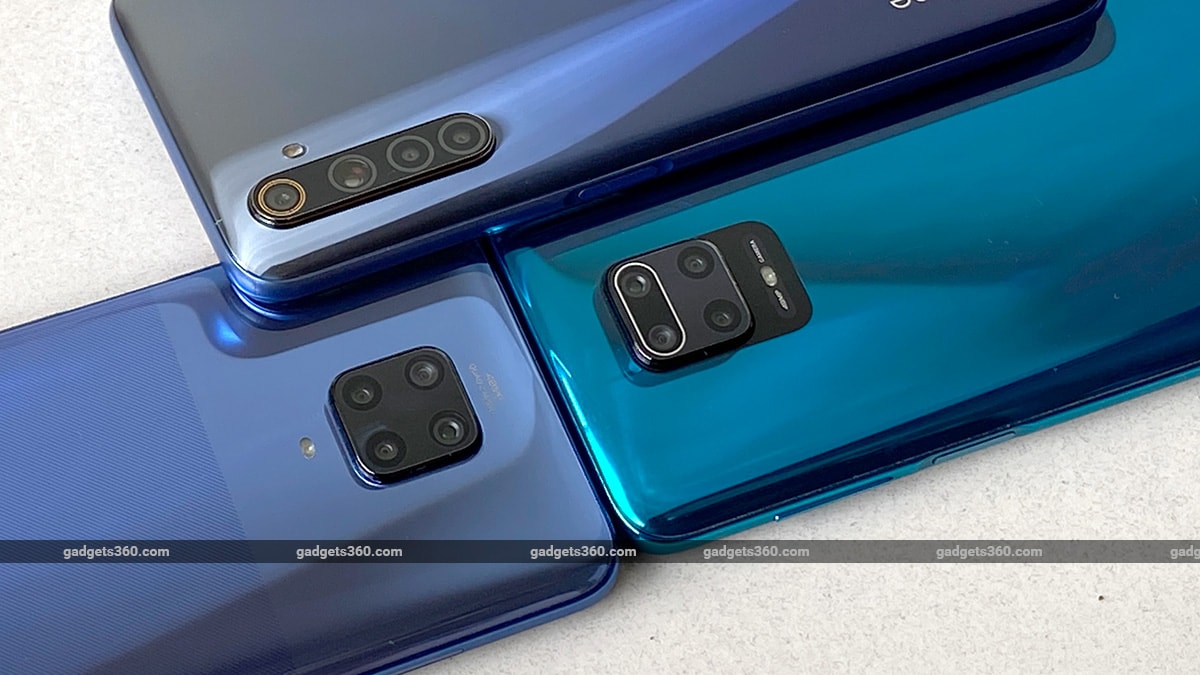 The cameras of all three phones do well in daylight, but struggle in low light

The Realme 6 has a similar setup, but with slightly different sensors. The biggest change is the primary camera, which is a 64-megapixel Samsung GW1 sensor. All three phones support video recording at up to 4K 30fps, and all three offer the usual suite of shooting modes. The Redmi Note 9 Pro and Poco M2 Pro can record video using their macro cameras, and the results are surprisingly good. You can't do this with the Realme 6, however, it does support Night mode for the wide-angle camera, which is missing from the Poco and Redmi.

We begin with daylight photos, and immediately, you'll notice a pattern among the three phones. The Redmi Note 9 Pro and Poco M2 Pro tend to boost colours quite a bit, which makes for striking photos, but is certainly not how the scene really looked considering it was overcast and drizzling. In comparison, the Realme 6 captured a duller-looking photo, but it was more accurate to the actual tone of the scene. The Realme 6 also managed to capture the best colours with its wide-angle camera. 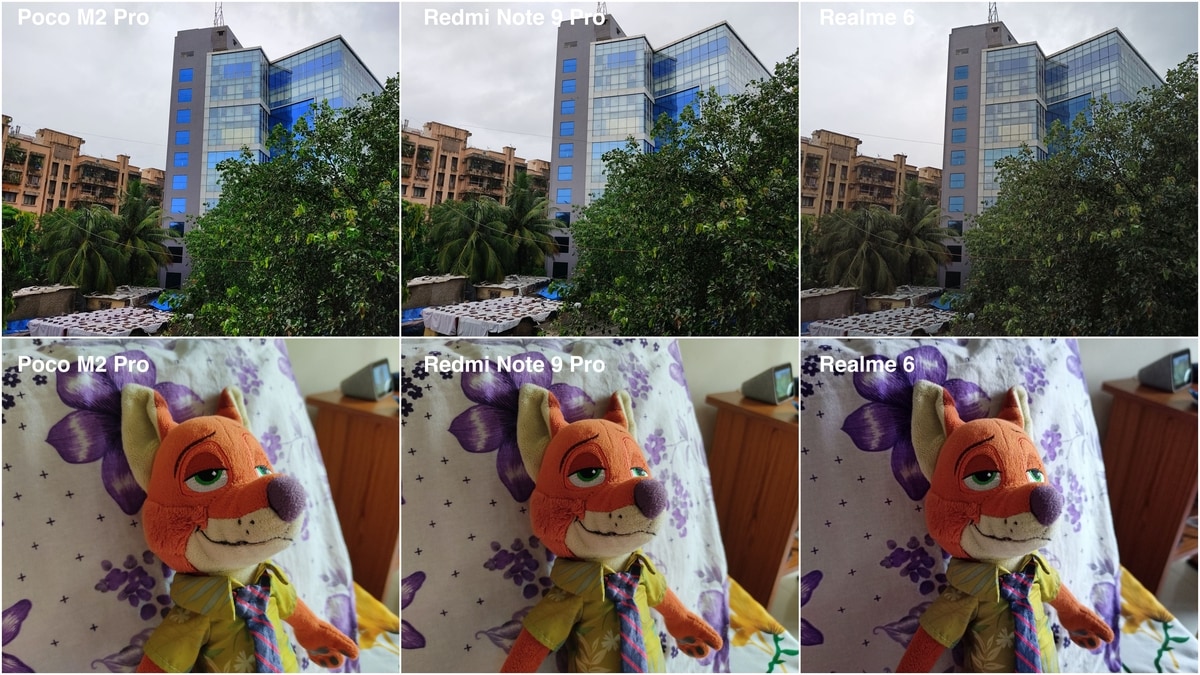 In close-ups, all three phones captured good details, but once again the Realme 6 had more natural colours. In our selfie tests, the Realme 6 did a poor job with HDR, while the other two exposed the frames a lot better.

In low light, all three phones struggled a bit to capture good details, but the Realme 6 pulled ahead. The Poco M2 Pro and Redmi Note 9 Pro's photos had less noise but details were severely lacking, and most objects looked smoothened with very little visible texture. The Realme 6's photos also looked grainy but showed a lot more detail in trees and distant objects. Night mode barely made a difference to photos from the Poco and Redmi phones, while the Realme 6 captured a brighter image, albeit with a heavily processed look. 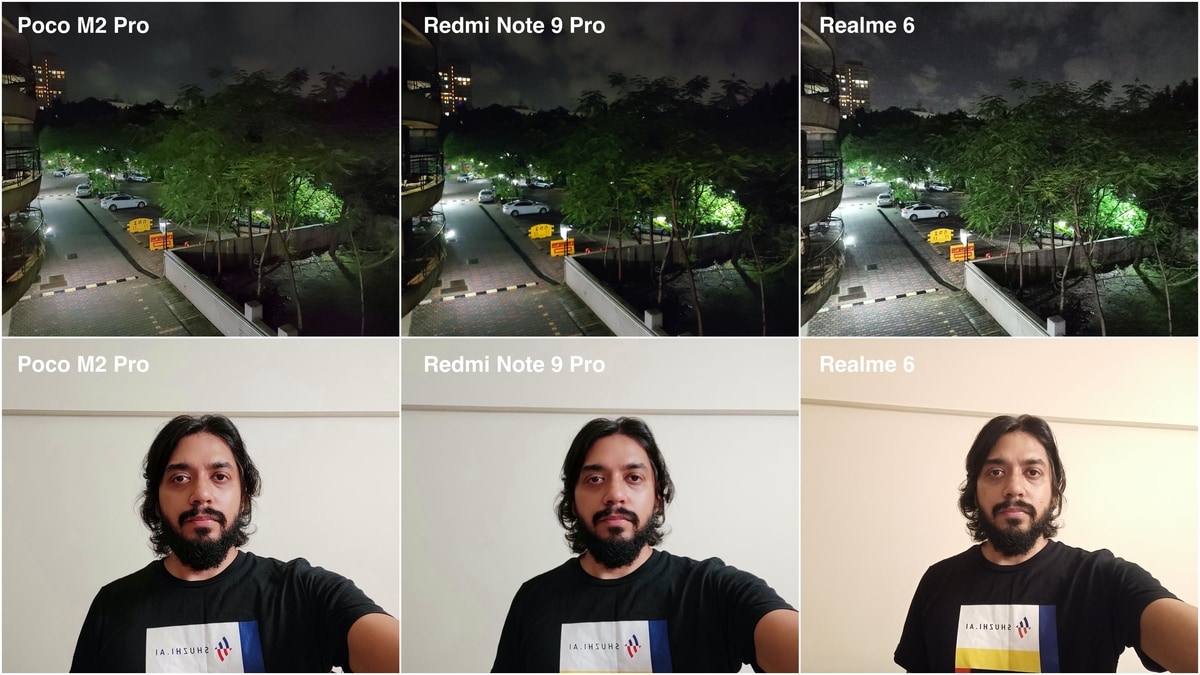 The wide-angle cameras of all three phones were practically unusable in low-light situations, but Night mode with the Realme 6 made photos captured with it look a tiny bit better. For close-ups, the Poco and Redmi phones did a much better job with white balance compared to the Realme 6.

For selfies shot indoors, under artificial light, I found that the Realme 6 produced the best details but the other two did a better job with white balance. The Realme 6 also has the most powerful screen flash, which helped it capture the best skin tones and details. The Poco M2 Pro and Realme 6 can both use Night mode with the selfie camera, but it wasn't very effective.

Looking at video performance, I found that the Realme 6 shot better-looking footage during the day with its main camera. Colours at 4K weren't overly exaggerated, as was the case with Poco and Redmi. However, it was the other way around when shooting with the wide-angle cameras. Here, the Redmi and Poco captured slightly better colours and details compared to the Realme 6. In low light, all three phones struggled to capture good quality footage. Videos taken with the Poco M2 Pro and Redmi Note 9 Pro looked dark with weak details, while the Realme 6 managed slightly better brightness but footage was grainier.

Overall, the Realme 6 tends to deliver more natural-looking photos and videos and is the one I'd pick, but if you prefer pictures with brighter colours, then you might prefer the Poco and Redmi phones. 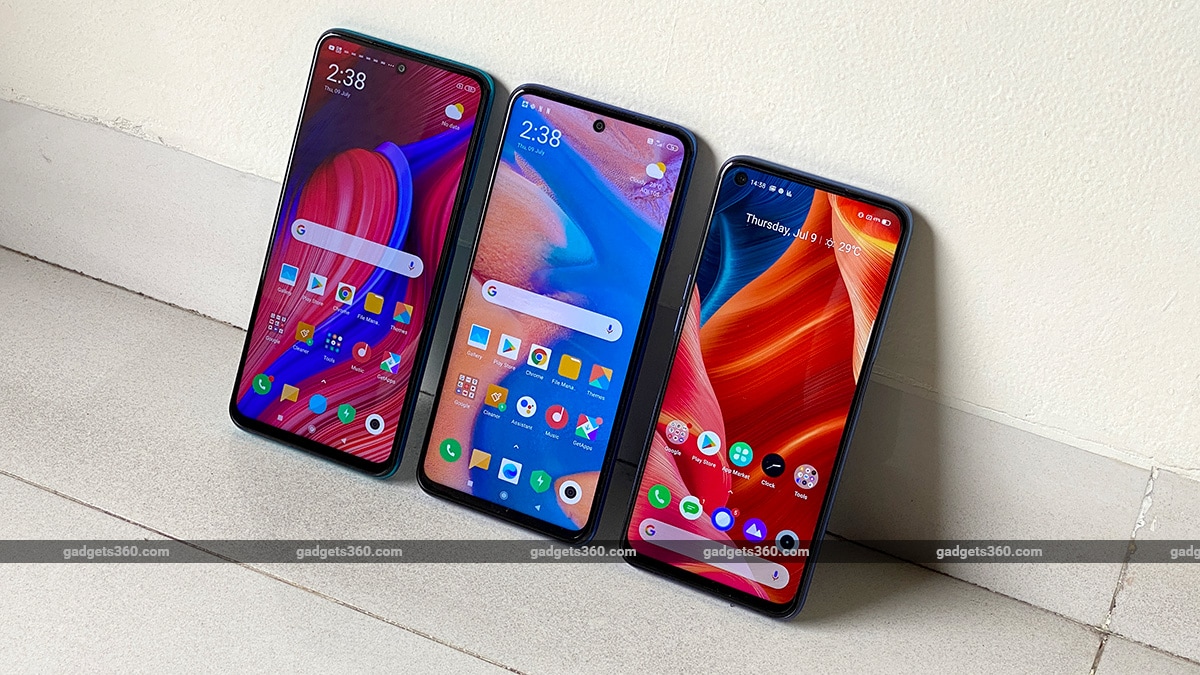 The Realme 6 (right) still makes a strong case for itself, compared to the new Poco M2 Pro (centre) and Redmi Note 9 Pro (left)

Let's narrow this down a bit. Going by my review and now this comparison of the Poco M2 Pro, I think it's safe to conclude that it's essentially the same as the Redmi Note 9 Pro, but in a different wrapper and with a quicker charger in the box. Both phones are also priced exactly the same, starting at Rs. 13,999 for 4GB of RAM and 64GB of storage. There doesn't seem to be any reason to buy the Redmi Note 9 Pro now, as the Poco M2 Pro offers better value.

In my opinion, the Realme 6 is still the phone to beat, as the base model with 4GB of RAM and 64GB of storage costs Rs. 14,999. It might lack the more premium looks of the Poco and Redmi devices, but it's easier to handle, has a slightly better main camera, and its 90Hz display is still unrivalled in this segment.