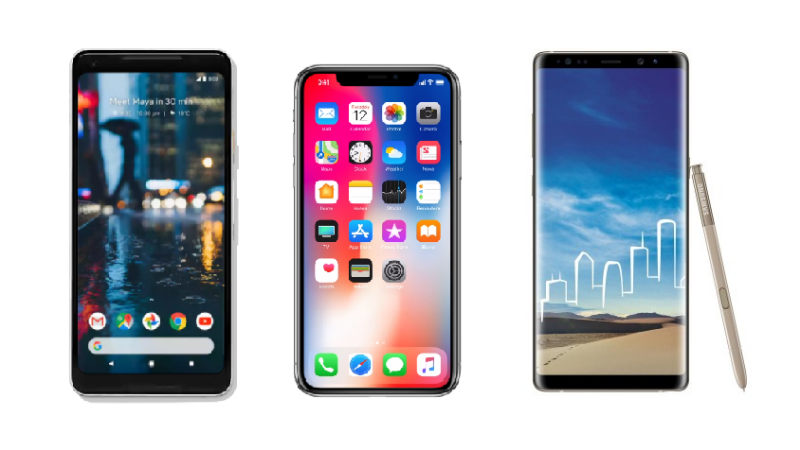 Pixel 2 and Pixel 2 XL were the highlights of last night’s Google event that also saw the launch of more Google Home smart speakers and a new Pixelbook convertible laptop. The new Pixel 2 and Pixel 2 XL come loaded with features such as the squeezable frame, improved camera, better optimised battery, and better hardware-software integration courtesy Google Assistant. Of the two phones, the Pixel 2 XL is the one with the bezel-less display, something that the recently unveiled iPhone X and Samsung Galaxy Note 8 also boast of.

All three smartphones are the flagships of their respective manufacturers, and come with features that distinguish them from the competition. While Google claims the Pixel 2 XL has the best smartphone camera in the market and Google Assistant-based personalisation, iPhone X has an all-new design for an Apple phone, facial recognition, a new powerful chipset, and wireless charging, among other features. Samsung Galaxy Note 8, on the other hand, has the biggest screen among the three, S Pen stylus support, bezel-less design, facial recognition, and its own digital assistant. Here's a comparison of the three smartphones on key parameters such as price, specifications and features to help you decide which would be the best option for you.

Google Pixel 2 XL has a 6-inch bezel-less P-OLED display with 1440x2880-pixel resolution, 18:9 aspect ratio and always-on functionality, and runs Android 8.0.0 Oreo software; the handset will get software updates and security support for three years, Google says. The handset is powered by the octa-core Snapdragon 835 processor, with 4GB RAM; it comes in 64GB and 128GB storage options, with no provision for storage expansion – however, users will get unlimited cloud storage for photos and videos. The metallic body is IP67 certified, meaning it can withstand dust and being dipped in up to 1 metre of water for up to 30 minutes. It has a squeezable frame that allows the new Active Edge feature to call up Google Assistant.

Pixel 2 XL has a 12.2-megapixel rear camera with f/1.8 aperture, PDAF, laser autofocus as well as optical and electronic image stabilisation, along with dual LED flash. The front camera has 8-megapixel resolution with f/2.4 aperture and 1.4-micron pixel size. There’s no headphone jack, and users will have to go with the USB Type-C earphones to listen to their music – the company is bundling a USB Type-C to 3.5mm adaptor to make the transition easier; there’s also stereo speakers. Key connectivity features include dual-band Wi-Fi, Bluetooth 5.0, GPS, NFC, and fingerprint sensor. The Pixel 2 XL battery capacity is 3520mAh.

Pixel 2 XL’s camera supports the new Motion Pictures, which are similar to Apple’s Live Photos, and is the first phone with Google Lens functionality. Google is also doubling down on Augmented Reality (AR) in ways other than Lens too, such as AR Stickers. The Assistant is also said to have become smarter over the past year and can now offer more personalised services to the Pixel 2 XL users.

Coming to iPhone X, the Apple flagship has a bezel-less design with a 5.8-inch Super AMOLED True Tone display and 1125x2536-pixel resolution; there’s also 3D Touch and HDR10 support. The iOS 11-powered smartphone packs the A11 Bionic hexa-core chip inside, with 3GB RAM; buyers can choose between two storage variants – 64GB and 256GB, with no storage expansion support. iPhone X is IP67 certified as well and supports the company’s NFC-based Apple Pay mobile payments platform. The Touch ID fingerprint sensor has given way to the Face ID facial recognition feature, which Apple claims is more accurate than the older biometric system.

As for the camera, iPhone X has a dual 12-megapixel camera setup, with quad-LED flash, PDAF, optical image stabilisation, and 2x optical zoom. The selfie camera has a 7-megapixel sensor with f/2.2 aperture. The TrueDepth front camera can deliver the depth of field effect of Portrait mode. As for connectivity features, you get dual band Wi-Fi, Bluetooth 5.0, GPS, and Lightning adapter. The iPhone X battery capacity is 2716mAh, according to third-party teardowns, and company says the phone supports fast-charging (from naught to 50 percent in 30 minutes of charge) and wireless charging (Qi standard).

On the software side, iPhone X buyers will get a smarter Siri, and features such as Animojis, AR implementations in various elements of the user experience (such as player stats if the phone is panned over team members during games). However, the iPhone X Notch that houses the front camera and the sensors might not seem like the best design choice to some buyers.

Samsung Galaxy Note 8 has the biggest display of the three at 6.3-inch, with Quad HD+ (1440x2960 pixel) resolution, always-on functionality, HDR10 support, and 3D Touch-like functionality on the Home button. The smartphone comes with Android 7.1.1 Nougat operating system and is powered by the octa-core Exynos 8895 chipset, coupled with 6GB of RAM. Its 64GB storage can be expanded via microSD card (up to 256GB), making it the only one among the three models here to support storage expansion. The phone is IP68 certified, meaning it can be dunked in water up to 1.5 metres, and is also dust-resistant.

The Galaxy Note 8 has two 12-megapixel sensors on the back, one with a wide-angle lens featuring Dual Pixel autofocus, f/1.7 aperture and OIS and another with a telephoto having f/2.4 aperture and OIS. You get depth of field effect with the rear camera setup, along with 2x optical zoom. The front camera of the phone has an 8-megapixel sensor with f/1.7 aperture. As for connectivity features, you get dual-band Wi-Fi, Bluetooth 5.0, GPS, NFC, USB Type-C, fingerprint sensor, iris scanner, facial recognition, and heart rate monitor. Its 3300mAh battery is claimed to give talk time of 22 hours and supports fast-charging.