Can Super VOOC Fast Charging Help Oppo Stand Out in the Mid-Range Segment?

Oppo's Super VOOC is 'Lamborghini' fast, but you might not have to spend so much to get fast charging

Your smartphone is about to draw its last breath, but you have to leave your home in the next few minutes. You're in deep trouble, right? Not necessarily. Today's fast-charging phones might be just what you need. It usually takes around two hours to fully charge a smartphone, but with these phones, 15-30 minutes of fast charging can give you enough power for a few hours’ worth of use.

Fast charging is a stop-gap method for dealing with the demands that octa-core SoCs and 4K displays put on our smartphones, until a completely new battery technology is developed. Today’s Lithium-ion batteries have seemingly hit their threshold, and not much innovation has been seen around them lately. Another way for companies to improve battery life is to simply use bigger batteries, but there are practical limits to how far this can go.

Smartphone manufacturers put a lot of manpower and money into creating user experiences in the form of products and services. Quick charging, fast charging, adaptive charging, or rapid charging, as it is referred to by different companies, is a popular solution that various brands such as Asus, Samsung, Xiaomi, Nokia, and Sony use, sometimes under their own marketing names. Nearly all of them use the same underlying technology licensed from Qualcomm.

Some phone and component manufacturers have popularised their own fast charging methods. Chinese manufacturer Oppo has its own standard called VOOC Flash Charge, and now it is rolling out an improved version called Super VOOC, which it plans popularise around the globe. Let's see how it works.

VOOC and Super VOOC
Oppo’s marketing has often centred around its cameras, but now the company is also promoting its proprietary charging technology, called VOOC Flash Charge. It was introduced by Oppo in 2014, and its successor, Super VOOC, was first announced at the 2016 Mobile World Congress show. Recently, during a visit to Oppo’s factory and headquarters in Shenzhen, China, Gadgets 360 spoke to Chen Tian, Oppo Hardware Technical Expert and Core Developer of VOOC Flash Charge to learn more about these technologies. While VOOC has been around a quite some time now, we got to hear a lot about what’s new with Super VOOC. 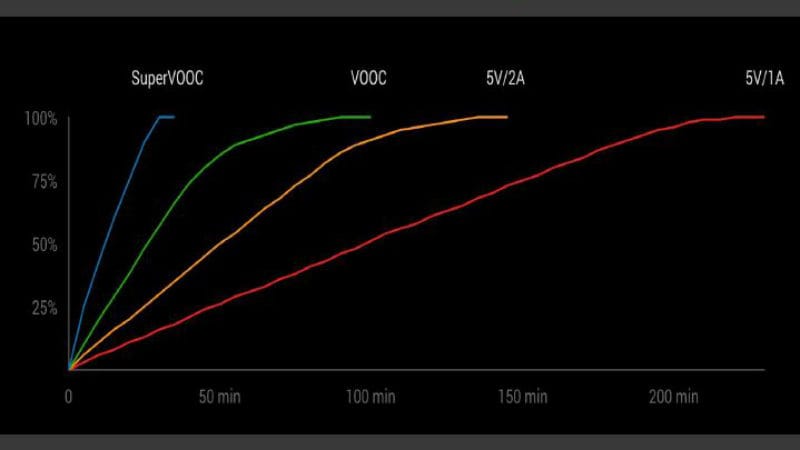 First up, we have to establish a basis for how charging usually works. Regular chargers supply power to a smartphone at a controlled and continuous pace, say for example 5W delivered using 5V (voltage) at 1A (current), since quick bursts of power can potentially damage its battery or circuitry.

Qualcomm was one of the first to introduce the idea of quick charging, back in 2013. Qualcomm’s method pumps a higher voltage into your device’s battery till it reaches a particular percentage, and then trickle-charges slowly it till 100 percent for safety. You need a certified charger that can output power at those specifications, as well as a certified smartphone, which will have adequate power regulation circuits that know how much power to draw safely.

A Quick Charge capable phone can cut off the power when the battery reaches its threshold, or if it begins to get too hot. It was claimed that Quick Charge 1.0 could charge a smartphone up to 40 percent quicker than standard devices, but the bigger advantage was that initial burst which could give users a lot of power in just a short time when they were running very low. Since then, Qualcomm has unveiled newer and quicker versions, and many phones ship with Quick Charge 2.0, 3.0, or 4+.

While Oppo's VOOC and Super VOOC use a slightly different approach, the basic principle is the same.

"When it comes to VOOC Flash Charge, the charging adapter supports output of 5V/4A (20W). A Super VOOC charger offers an output of 10V/5A (50W), which is much higher," Chen explains.

VOOC (Voltage Open Loop Multi-step Constant-Current Charging) is promoted as being twice as fast as a standard 5V/1A charger. According to Oppo, if a standard hardware is capable of charging the battery up to 100 percent in 200 minutes, VOOC Flash Charge can do it in 100 minutes, and Super VOOC will take less than an hour.

In terms of safety, Chen said, "VOOC is not only fast, it is also safe". You need to use Oppo’s own charging cable and power adapter with modified 7-pin USB connectors.

Oppo boasts of using five layers of protection. The charger and phone recognise each other before power is transferred at a high current, there are voltage testers built into the adapter and phone, and each phone also has a fuse. The bulk of the required circuitry is housed within the charger, so that the phone being charged doesn’t get too hot. Chen added, "When the smartphone is charged up to 100 percent, the charger will automatically stop supplying power to prevent any kind of possible damage." 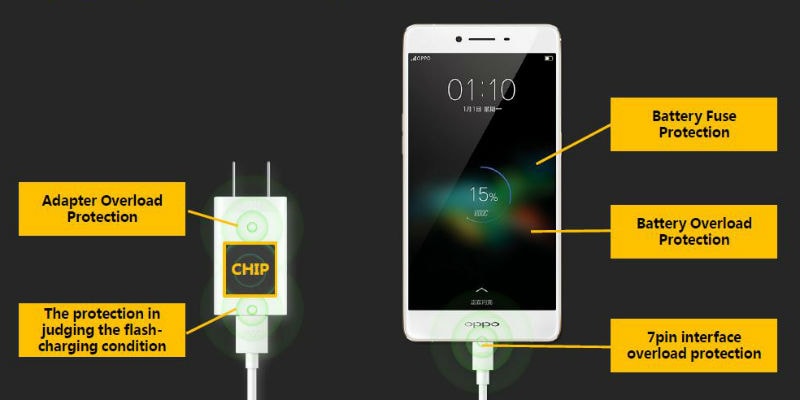 All this means that Oppo's propriety technology will not be supported on handsets from other manufacturers. However, Oppo’s sister company OnePlus has licensed it internally and offers a very similar quick charging method called Dash Charge — possibly soon to be renamed to Warp Charge — which uses higher current instead of using higher voltage to fill up a battery faster.

The future of Super VOOC
Super VOOC could help Oppo stand out even more, but it is not yet available in mainstream phones. The new technology debuted with the Oppo Find X Automobili Lamborghini Edition, which is priced at a whopping EUR 1,699 (roughly Rs. 1,34,400). Chen said that Oppo is working hard on bringing the tech to more affordable smartphone models as well. The Oppo R17 Pro was recently announced in China, and while this is still a premium model, it is much more mainstream also features Super VOOC. "We realise that the charging speed is an urgent requirement for users”, Chen explained. "Super VOOC is now a mass production technology."

Disclosure: Oppo sponsored the correspondent's flights and hotel for the visit to China.