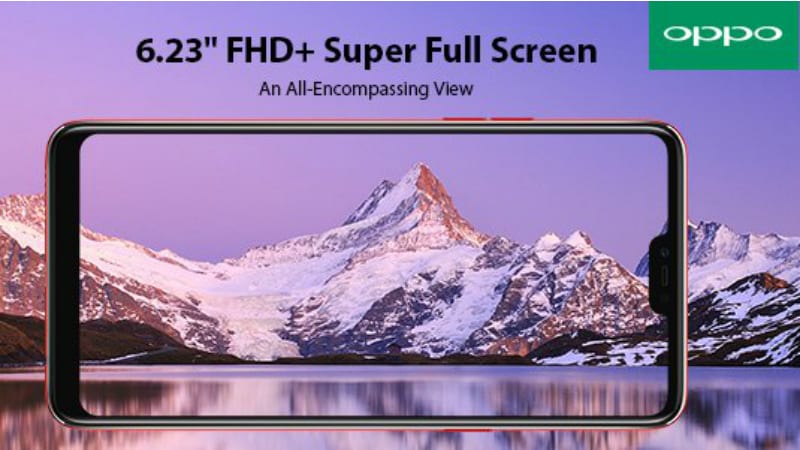 The Oppo F7 India launch event is set for Monday, March 26, and will see the launch of yet another smartphone with design similar to iPhone X, down to the notch. Some features and specifications of the new Oppo F7 have already been revealed officially in a press note, but there’s a lot more that recent leaks have given away. Of course, the Oppo F7 price in India and release date remain a mystery so far, which will be announced at the launch event. For those unaware, Oppo’s sister company Vivo launched the V9 smartphone just a day ago, featuring a notch and a similar design.

Oppo F7 will have a 6.2-inch full-HD+ (1080x2280 pixels) Super Full Screen display panel with aspect ratio of 19:9 and 89.09 percent screen-to-body ratio. A recent leak says the smartphone will be powered by the oct-core MediaTel Helio P60 chip (four Cortex A73 cores at 2GHz and four Cortex A53 cores at 2GHz). It is said to have the Mali-G72MP3 GPU and 6GB of RAM. For optics, the smartphone is said to have a 16-megapixel camera on the back, with f/2.0 aperture, 4K video recording, and dual-tone LED flash. And for selfies, the smartphone will have a 25-megapixel camera in front.

On the software front, the Oppo F7 appears to run ColorOS 5.0 with features such as facial unlock and screen recording. There is also a rear-facing fingerprint sensor and connectivity options such as 4G VoLTE, Wi-Fi, Bluetooth, and GPS/ A-GPS. The battery capacity of the smartphone is said to be 3400mAh, and the handset is claimed to last up to 15 hours on a single charge.

Going by the teasers, Oppo F7 will feature a design reminiscent of the iPhone X. The notch is rather conspicuous in the marketing material pushed by the company so far, as are the bezel-less display and rounded corners.

Coming to the features of the smartphone, photography fans will get AI selfie, AI Beauty Technology 2.0, and Real-time HDR modes in the camera. There will also be Cover Shot and AR Stickers, which was also seen on the Vivo V9 handset. For navigation, buyers will have to use gestures, and there will be an App-in-App view for multitasking.

The ticker on the Oppo India website says the launch event will start at 12:30pm IST on Monday, March 26. The event will be live streamed, so fans can catch the action in real time. Oppo has roped in cricketers Rohit Sharma, Hardik Pandya, and Ravichandran Ashwin as brand ambassadors.