OnePlus 7 vs Google Pixel 3a Camera, Performance, Battery Life Comparison: Which One Should You Buy?

The OnePlus 7 and the Pixel 3a take two different approaches to address what a budget premium smartphone should be like. But which one is the one for you?

Which one should you pick between the OnePlus 7 and Google Pixel 3a?

The mid-range flagship segment has seen a lot of new launches of late. We have seen smartphones from OnePlus, Oppo, Black Shark, and Google launching at around the Rs. 40,000 price point, and they will all be fighting to get a chunk of the market. Naturally, if you are looking for a smartphone at this price point, narrowing down your choices isn't easy.

Two of the smartphones that are quite popular in this segment are the recently launched OnePlus 7 (Review) and Google Pixel 3a (Review). What makes deciding between these two models hard is that they aren't built to serve the same purpose. The OnePlus 7 is a powerhouse with top-of-the-line hardware, while the Pixel 3a offers great camera performance and guaranteed software updates. So which one is the better choice for you? We pit the two against each other to find out.

OnePlus 7 vs Pixel 3a design

It is interesting to see that Google and OnePlus have taken different approaches with these smartphones when it comes to design. The Google Pixel 3a is a more affordable version of the Pixel 3 (Review) and has a plastic body. On the other hand, the OnePlus 7 uses glass in its construction which gives it a premium look and feel.

The Pixel 3a is small and convenient for one-handed use. It has a 5.6-inch OLED display with an 18.5:9 aspect ratio and Asahi Dragontrail glass for protection. We don't really like the thick bezels on this smartphone which make it look dated. It sports a 3.5mm headphone jack at the top, while the USB Type-C port and loudspeaker are at the bottom. The power and volume buttons are on the right, and are easy to reach.

The Google Pixel 3a has a rear-mounted capacitive fingerprint scanner, and it is well-positioned, so your index finger will rest on it naturally when holding the smartphone. Just like the Pixel 3, the Pixel 3a relies on a single camera at the back. The OnePlus 7 has a slightly larger footprint than the Pixel 3a. It sports a bigger 6.41-inch optic AMOLED display. The bezels around the display are considerably thinner than those on the Pixel 3a. The display has a 19:9 aspect ratio and has Corning Gorilla Glass protection. The OnePlus 7 does not have a 3.5mm headphone jack, and doesn't ship with a USB Type-C to 3.5mm dongle in the box either.

We also like the button placement on the OnePlus 7, as the power and the volume buttons are easy to reach. There is also a three-position alert slider which is handy to change ringer profiles quickly. This phone does not have a traditional fingerprint scanner; instead it's integrated into the display.

It isn't easy to pick between the two, as people who prefer a small phone for ease of use or those who value a headphone jack would prefer the Pixel 3a, but in terms of design and build quality, it is the OnePlus 7 that has this segment in the bag.

OnePlus 7 vs Pixel 3a specifications and software

The OnePlus 7 and the Pixel 3a both sport AMOLED displays with full HD+ resolutions. However, the OnePlus 7 has more display modes to choose from, and it also lets you tweak the colour temperature of the panel. We also found that the OnePlus 7 can get brighter than the Pixel 3a.

Performance is where these two smartphones are poles apart. Google has opted for the Qualcomm Snapdragon 670 SoC coupled with 4GB of RAM and 64GB of storage. There is only one configuration, and the lack of microSD storage expansion means that you'll have to deal with the storage you get or use cloud services.

The OnePlus 7 is powered by the Qualcomm Snapdragon 855 which is a top-of-the-line processor. It is significantly more powerful than the Snapdragon 670. OnePlus also offers the 7 in two variants; 6GB of RAM with 128GB of storage, or 8GB of RAM with 256GB of storage. Storage isn't expandable with the OnePlus 7 either, but you get more space to begin with. The OnePlus 7 also sports UFS 3.0 storage which is faster than what the Pixel 3a offers.

The Google Pixel 3a packs in a 3000mAh battery and you get an 18W charger in the box. The OnePlus 7 sports a 3700mAh battery and comes with a 20W rapid charger. One key difference is that while both the smartphones are dual-SIM, only the OnePlus 7 has two physical Nano-SIM slots. You get only one Nano-SIM slot on the Pixel 3a, and your second SIM has to be an eSIM, which not all operators in India support. 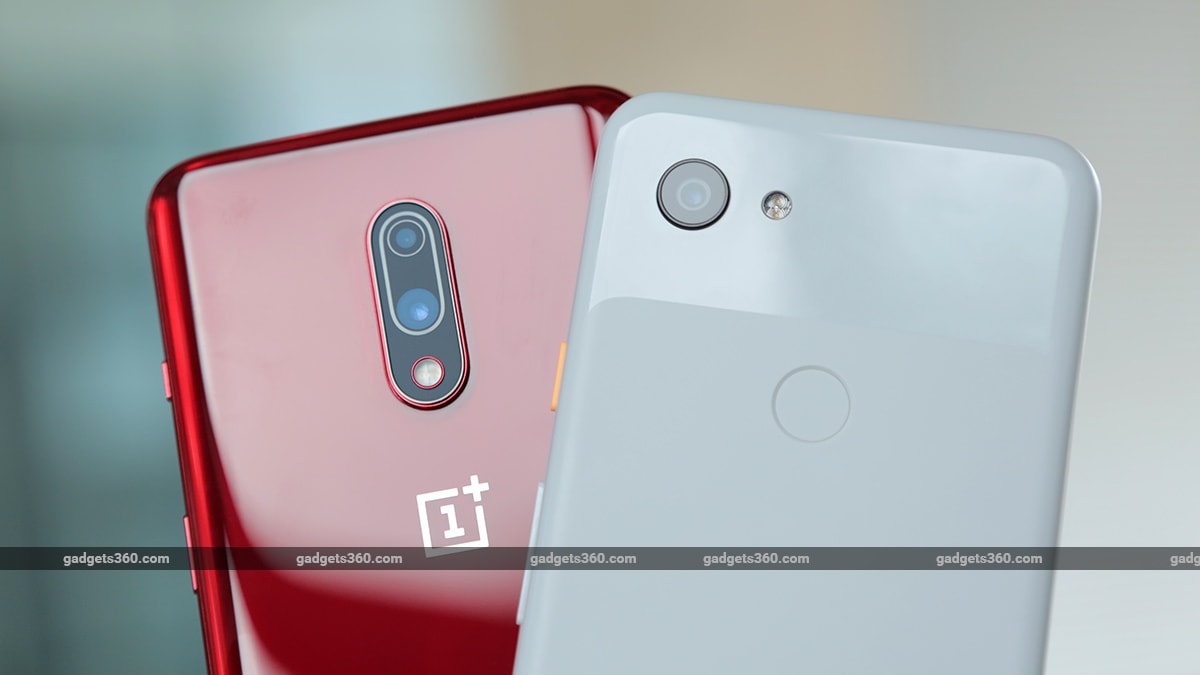 Software is where you will notice several differences between the Google Pixel 3a and the OnePlus 7. With the Pixel 3a you get pure stock Android along with the promise of guaranteed software and security updates for three years. It will also be one of the first few devices to be updated to the latest version of Android.

The OnePlus 7 on the other hand runs OxygenOS which is very similar to stock Android but has a bunch of features added on top. If you like to tweak settings or customise your smartphone, the OnePlus 7 does offer that with OxygenOS.

The Google Pixel 3a was running the June security patch while the OnePlus 7 was running the May security patch at the time of this comparison. In terms of software, it is a tie between these two smartphones because it isn't easy to choose between stock Android with quick updates and OxygenOS with its useful features. You can read about some of the features that OnePlus has added to OxygenOS 9.5 in our OnePlus 7 Pro review.

OnePlus 7 vs Pixel 3a performance, battery life, and cameras

This actually reflects well on the Google Pixel 3a, since its processor does not have the kind of brute force that the OnePlus 7's Snapdragon 855 is capable of. Multitasking is quick on both these smartphones but the OnePlus 7 has the edge here since it has more RAM.

While the OnePlus 7 has an in-display fingerprint scanner, the Google Pixel 3a relies on a traditional one. Both are quick, but the OnePlus 7 unlocks itself quicker than the Pixel 3a. The OnePlus also gets face recognition. Now this might not be the safest way to secure a smartphone but it is convenient to use.

Watching videos on both these phones is a good experience, as both sport stereo speakers, but we found that the OnePlus 7 can get slightly louder than the Pixel 3a.

The lead that the OnePlus 7 has in terms of performance is clear in GPU-centric benchmarks as well. It scored 37fps in GFXBench Car Chase and 7,559 points in 3DMark Sling Shot. On the other hand, the Pixel 3a could only manage 10fps and 2,435points in the same tests respectively. 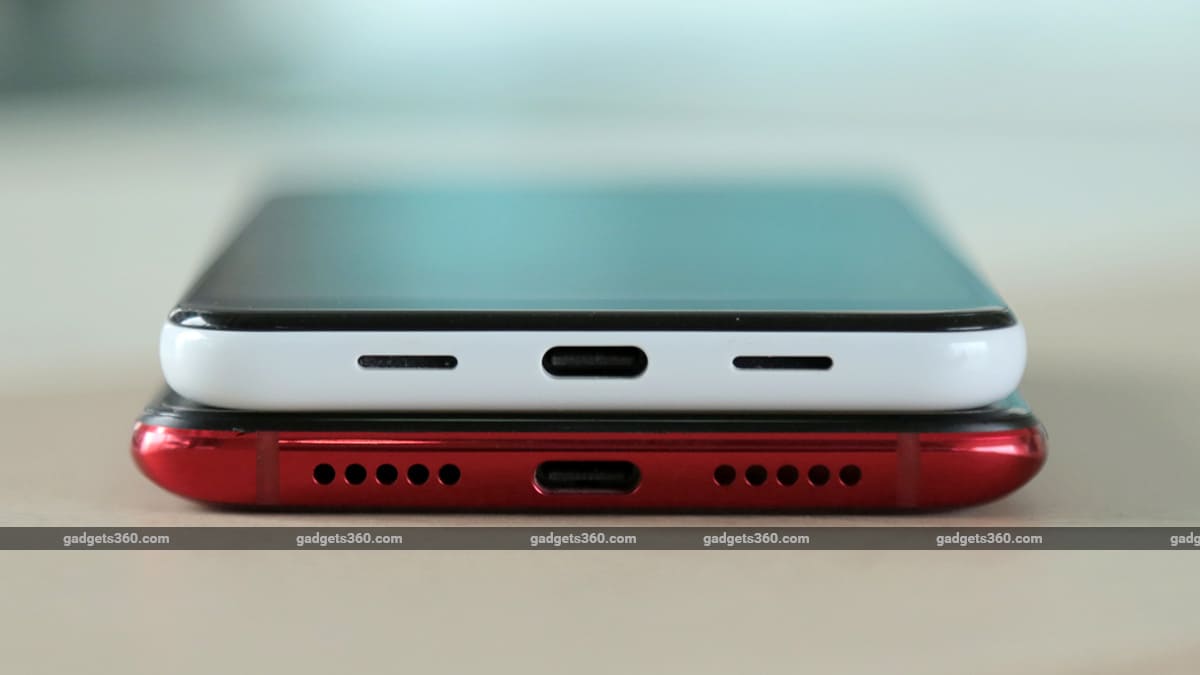 Both the smartphones have a USB Type-C port

The performance advantage that the OnePlus 7 has is evident when playing games. While both smartphone ran PUBG Mobile, at the High preset, the Pixel 3a did not give us the option to run the game at Ultra frame rate. The OnePlus 7 showed no signs of slowing down when we bumped every setting up.

Both these smartphones will last you over a day with normal use, but in our HD video loop test, the OnePlus 7 managed to last longer than the Google Pixel 3a. It ran our loop test for 15 hours and 16 minutes, compared to the 11 hour and 3 minutes that the Pixel 3a managed. We also found that the OnePlus was quicker than the Pixel 3a to charge completely despite its higher capacity battery.

We tested both these smartphones under different lighting conditions in a full-blown camera comparison. You can click here to see lots of photo samples taken with both phones. Overall, it was the Pixel 3a that won most of our tests, and if you are looking for a smartphone purely based on camera quality, the Google Pixel 3a is the one to pick.

Verdict
After putting the OnePlus 7 (Review) and the Google Pixel 3a (Review) in a head-to-head competition, it is clear that the OnePlus 7 is the more powerful of the two. It is also built using better materials and feels more premium. While it does not have the same advantages as the Google Pixel 3a when it comes to its cameras and software updates, it does have more RAM and storage, and runs OxygenOS which has lots of useful features.

The Google Pixel 3a is a toned down version of the Google Pixel 3 and excels in terms of camera performance and ships with stock Android as well as the promise of timely software updates. It is also compact and has a headphone jack. If these features are more important to you than raw performance, then you can choose the Pixel 3a. However, if photography isn't a priority, the Pixel 3a won't offer the same kind of value of money as the OnePlus 7.

Will Aggressive Pricing Help OnePlus 7 and Oppo Reno 10X Zoom Succeed in India? We discussed this on Orbital, our weekly technology podcast, which you can subscribe to via Apple Podcasts or RSS, download the episode, or just hit the play button below.

Xiaomi Reveals MIUI Update Plan for Android Q, Redmi K20 Pro, Mi 9, and Others to Get New Experience Starting Q4
Men in Black: International Movie Review — the Thor: Ragnarok ‘Spin-Off’ Has None of Its Magic