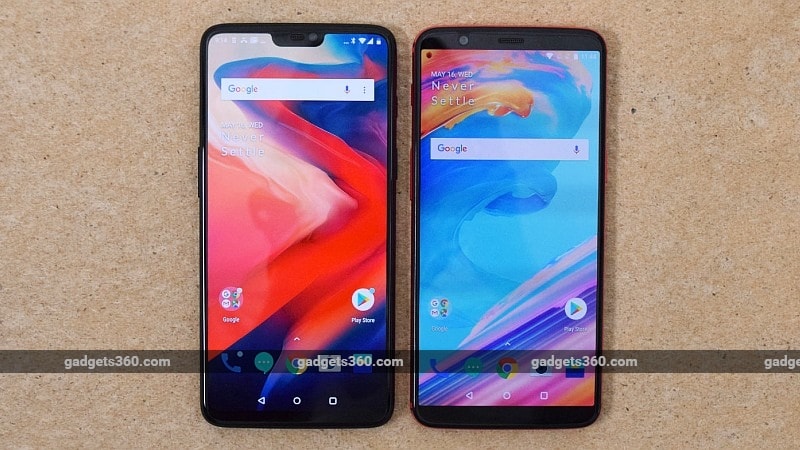 OnePlus 6 sale in India will start on May 21

OnePlus 6 was launched in India yesterday, bringing to the country the Chinese company's latest flagship smartphone. Here, we take a look at how the OnePlus 6 compares with the OnePlus 5T, the last flagship in the company's stable. Of course, the latest flagship is more expensive than the last, with the company continuing its upward trend. The phones have several similarities, with both the OnePlus 6 and OnePlus 5T bearing bezel-less displays, however, the newest flagship features an even taller display that's been offset with the use of an iPhone X-style notch. Both the smartphones also feature dual rear cameras, full-screen gestures, displays that support both the sRGB and DCI-P3 colour gamuts, apart from having similar base model configurations - 6GB RAM and 64GB storage. Of course, this article is about what's new and different on the OnePlus 6, compared with the OnePlus 5T, so let us not just dwell on the similarities.

The OnePlus 6 price in India is Rs. 34,999 for the base 6GB RAM/ 64GB storage variant and Rs. 39,999 for the 8GB RAM/ 128GB storage option. The standard 8GB RAM/ 256GB storage variant is not being launched in India, but those who want the top-end variant can go for the OnePlus 6 Marvel Avengers Limited Edition model. Priced in India at Rs. 44,999, it comes with 8GB RAM and 256GB storage, sports a custom design inspired by the hit Marvel franchise, and will be available in limited quantities only.

While the OnePlus 6 sports an all-glass body, featuring Corning Gorilla Glass 5 on both sides of the smartphone, the OnePlus 5T sports a metal unibody design, built with anodised aluminium - it only bears the Gorilla Glass 5 protection on the front. Despite the use of glass, OnePlus claims the OnePlus 6 has been tested to be as durable in terms of falls and shocks compared to previous generations of the company's smartphones.

Of course, we'd be remiss not to mention another major design difference - the use of the iPhone X-like notch on the OnePlus 6. The company has squeezed the front camera, proximity sensor, and earpiece into the notch, whereas on the OnePlus 5T these components were present on an upper lip above the bezel-less display. This, as you would imagine, helps maximise visual real estate on the smartphone, with less space taken up on the front panel for things apart from the display. Both smartphones feature fingerprint sensors on the rear panel, at the centre of the smartphone. Along this line, we also have to mention that the OnePlus 6 has a vertical dual rear camera setup, once again in the centre of the rear panel, whereas the OnePlus 5T bears a horizontal dual rear camera setup, placed on the top left of the smartphone.

The last major design difference we'd like to talk about is the colour variants available. The OnePlus 5T was launched in Midnight Black, but made available in special edition variants such as the Lava Red and Star Wars (White). The OnePlus 6 on the other hand, has been launched in Midnight Black and Mirror Black colour variants, with a Silk White special edition variant announced for release next month.

OnePlus 6 vs OnePlus 5T: Hardware differences
Let's start with the cameras. As we mentioned, both the OnePlus 6 and OnePlus 5T feature dual rear camera setups, and while there are some similarities, there are some major differences. First off, OnePlus has used a vertical dual camera setup on the OnePlus 6, compared to horizontal dual camera setup on the OnePlus 5T. The OnePlus 6 has a primary 16-megapixel Sony IMX519 sensor with a 1.22-micron pixel size, f/1.7 aperture, OIS, and EIS. The secondary 20-megapixel Sony IM376K sensor has a 1-micron pixel size and an f/1.7 aperture. The rear cameras are supported by a dual-LED flash module, and the company is touting Slow Motion video recording up to 480 frames per second.

The OnePlus 6 also sports the latest, greatest silicon from Qualcomm, and is powered by the Qualcomm Snapdragon 845 SoC coupled with either 6GB or 8GB of LPDDR4X RAM, apart from the Adreno 630 GPU. The OnePlus 5T on the other hand sports a Snapdragon 835 SoC, with either 6GB or 8GB of LPDDR4X RAM, coupled with the Adreno 540 GPU. While both processors are 10nm based, OnePlus claims the newer processor provides an improvement in performance of up to 30 percent, and 10 percent greater power efficiency. As for the GPU, OnePlus claims a 30 percent improvement in performance compared to the last generation.

The last major hardware difference between the smartphones is the inclusion of a 256GB inbuilt storage model on the OnePlus 6. The OnePlus 5T on the other hand offers a maximum of 128GB of inbuilt storage. Neither smartphone supports storage expandability via microSD card.

OnePlus 6 vs OnePlus 5T: Software differences
Both the OnePlus 6 and OnePlus 5T run OxygenOS, the smartphone maker's custom Android ROM, with several customisation (Reading Mode, Gaming Mode) and personalisation (Themes, Accents) options over and above stock Android. While the OnePlus 5T was launched with OxygenOS 4.7, it has since been upgraded to OxygenOS 5.1 - something the OnePlus 6 will launch with out-of-the-box. Both are based on Android 8.1 Oreo.

On the OnePlus 6, the company says it has further optimised the smartphone for speed, making improvements for app launch times, the caching for frequently used apps, as well as overdraw reduction. Separately, it has further improved Gaming Mode on the OnePlus 6. While OxygenOS 5.1 brought Gaming Mode improvements to the OnePlus 5 and OnePlus 5T, the Gaming Mode on the OnePlus 6 will have extra features like limiting processes in the background when in the mode, giving network prioritisation to gaming apps, and giving the option to enable a 'gaming battery saver' while gaming. Lastly, the OnePlus 6 will also have a Smart Folder feature - when you drag and drop apps to create folders, OxygenOS will name the folder based on the apps it contains.