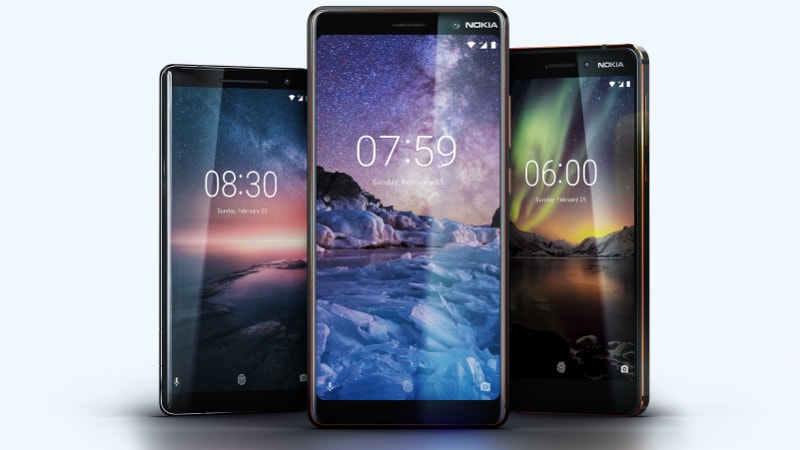 With more than 70 million phones sold in 2017, Nokia Mobile’s comeback has been pretty solid, even if the numbers are led by the sales of its feature phones. Compared to other “legacy” brands like HTC and Sony, Nokia is in the lead, outselling them globally in Q4 2017, although it’s still got to catch up to the newer market leaders, such as Xiaomi, Samsung, and Apple. The company spent much of last year re-establishing relationships with distributors, establishing production channels, and building a brand identity that revolves around pure Android, timely updates, and attention to design and detail.

The company faced some criticism as well, primarily revolving around underpowered internals and below average cameras in its budget smartphones. This week, HMD Global, the company which holds the Nokia brand, launched three new smartphones in the Indian market, kicking off its 2018 slate. At the launch event, Gadgets 360 spoke to Pranav Shroff, Global Portfolio Director, HMD Global about how it's going to build on its gains from last year, and how the new slate hopes to answer criticisms about its 2017 offerings.

Talking about Nokia’s latest flagship, Shroff said that the Nokia 8 Sirocco is a special edition, an experiment inspired by the Sirocco design of old. The Sirocco moniker was first seen in 2005’s Nokia 8800 Sirocco Edition which had a display covered with sapphire glass, glossy steel panels and shipped with a case made out of leather.

“It [Nokia 8 Sirocco] is our statement on how we can push the boundaries on craftsmanship," he said. “We wanted to have a Nokia offering for consumers who want an ultra-compact, great looking device that takes great pictures, performs well, fits in the hand and pushes the boundaries of design," he continued. "I don’t believe that segment is niche. I just believe this is something different we are doing in a world where everything is going bigger and larger. We believe this is an under served segment today.”

He also hinted that Nokia has another flagship in the works for 2018 when Gadgets 360 asked about why the Nokia 8 Sirocco, which is as different from last year’s Nokia 8 as chalk from cheese, was not given a unique identity of its own. Shroff quipped that the Nokia 8 Sirocco "is not called the Nokia 9 because it is not the Nokia 9" - which could mean that the Sirocco will be replaced by another phone on the top of Nokia's slate in the coming months.

The Nokia 1 is the first smartphone from HMD Global to run on the Android Oreo Go platform.

When it comes to the Nokia 8 Sirocco, the biggest elephant in the room is the lack of the Snapdragon 845 SoC. The smartphone uses last year’s Snapdragon 835 chipset, which Shroff claimed was a conscious choice. He claims Nokia had a choice of optimising the Snapdragon 835 beautifully, or taking a brand-new chipset and potentially launching later. “This [launching with Snapdragon 835] has given us an opportunity to come with a really tuned chipset and bring it earlier for the fans," he said. According to our sources within the company, if Nokia had chosen to ship with the Snapdragon 845, it would have had to wait until September, which could be another reason why we're looking at a Sirocco and not a Nokia 9.

Of all the new launches, the Nokia 7 Plus looks to be the most complete and well-priced smartphone to us, and Shroff feels the same way. “The 7 Plus is for that segment which wants a large-screen, great performance and flagship level imaging - all at a great price,” he said. At the same time, he reiterated a sentiment that Juho Sarvikas, Chief Product Officer, HMD Global told Gadgets 360 last year, saying that Nokia will never try to outdo or match the competition in terms of clock speed, display size, or amount of RAM.

“There was a huge uproar about the [Snapdragon] 430 processor [in the Nokia 6], till people used it," Shroff said, to illustrate this point. "And consumers actually did not complain about it - they loved it. However, one of the biggest enhancement requests we had was whether you can take it to the next level of performance.”

The Nokia 6 (2018) improves upon its predecessor in almost every way - with a Snapdragon 630 processor, improved cameras with ZEISS optics, a USB-Type C port, and fast charging support. However, it lacks an 18:9 edge-to-edge display, which has become quite common these days. According to Shroff, the main priority while designing the new Nokia 6 was maintaining the tank-like build quality of the original and that involved a few compromises, implying that the 18:9 ratio makes phones less durable. “We would not do anything that would make us lose the build-to-last image,” Shroff said.

The conversation then drifted towards the Nokia 2 - last year's phone aimed at the masses that runs a full version of Android with 1GB of RAM and the Snapdragon 212 processor. Shroff admitted that if Android Oreo Go - which is seen on the recently launched Nokia 1, which was also showcased at this week’s event - had existed during the Nokia 2’s conception, Nokia would have designed the smartphone around the same. Having said that, he also claimed that the smartphone has done quite well, and consumers have been loving it.

With an all-new line-up, promising sales numbers and partnerships with the likes of Kolkata Knight Riders, the future looks bright for Nokia in India. However, the company needs to double down on marketing and price its phones aggressively to compete with the likes of Xiaomi and Motorola. Stay tuned to Gadgets 360 for our full reviews on the new Nokia 6, Nokia 7 Plus, Nokia 1, and Nokia 8 Sirocco.