Nokia stole the limelight at the ongoing MWC 2017 with its four phones, but Moto and Sony were not too far behind either. Then there was LG’s new flagship smartphone as well as BlackBerry’s swansong. But these were not all, as smartphone enthusiasts got a lot more devices to check out at the biggest mobile expo of the year, including the world’s first 5G-ready smartphone. So, here’s the list of the smartphones launched at Mobile World Congress 2017 so far.

The most attention this MWC probably went to a feature phone, not a flagship smartphone. That would be surprising in most cases, but not when we are talking about the modern avatar of the iconic Nokia 3310. The new Nokia 3310 (2017) sports a 2.4-inch QVGA (240x320 pixel) colour display, compared to the 48x84 pixel resolution of the original. The handset runs on Nokia Series 30+ OS and comes with 16MB storage and supports expandable storage via microSD card (up to 32GB). On the back is a 2-megapixel camera with LED flash; the feature phone also offers FM radio.

The new Nokia 3310, much like its original sibling, features a massive standby time of up to a month, a highlight of the device. The new Nokia 3310 also includes the regular Micro-USB port and ditches the pin charger. It supports 2G Internet access and Bluetooth 3.0 with Nokia's SLAM technology. The new Nokia 3310 will be available in Warm Red and Yellow with a gloss finish while will also come in Dark Blue and Grey colour with a matte finish. Nokia 3310 (2017) packs a removable 1200mAh battery that offers 22 hour talk-time and month-long standby time.

As rumoured, Nokia 6 global launch announcement was made at MWC 2017, but that was not all. The premium Nokia 6 Arte Black model was also launched at the event, offering better hardware than the standard global model. Like the Nokia 6 China variant, the Arte Black special edition model has 64GB internal storage and 4GB RAM; it also sports a glossy look.

The cheapest Nokia Android phone in the market right now, the Nokia 3 is designed for those who want a smartphone with premium design at budget. Priced at EUR 139 (about Rs. 9,800), the smartphone has a polycarbonate body and metallic frame on the sides. It has a 5-inch HD screen, Android 7.0 Nougat operating system, 1.3GHz quad-core MediaTek 6737 chipset, 16GB internal storage, up to 128GB microSD card support, Micro-USB 2.0, NFC, 2650mAh battery, and 8-megapixel cameras on the front and back.

Nokia 5, on the other hand, was introduced as the handset for those who want a compact smartphone. Nokia 5 is priced at EUR 189 (about Rs. 13,500) and features a fingerprint sensor, unlike Nokia 3. The Nokia Android phone comes with a 5.2-inch HD screen and Android 7.1.1 Nougat operating system. It is powered by the Snapdragon 430 processor coupled with 2GB of RAM, and comes with 16GB inbuilt storage; it supports expandable storage via microSD card (up to 128GB). When it comes to the camera, Nokia 5 has a 13-megapixel unit on the back and 8-megapixel unit in front. Other features of the smartphone include Micro-USB 2.0, NFC, 3000mAh battery, and 4G LTE support.

Moto G5 Plus, launching in India on March 15, features a 5.2-inch full-HD (1080x1920 pixels) display and is powered by the 2GHz Snapdragon 625 octa-core processor. It comes in 2GB, 3GB, and 4GB RAM option depending on the region, either 32GB or 64GB of inbuilt storage, and with the option to expand further via a microSD card slot (up to 128GB). The Moto G5 Plus sports a 12-megapixel rear camera with dual autofocus, 4K video recording, f/1.7 aperture, and dual-LED flash. The Moto G5 Plus packs a 3000mAh non-removable battery with TurboPower charging that claims to give you six hours' worth of battery life in just 15 minutes.

The Moto G5 features a 5-inch full-HD (1080x1920 pixels) display; powered by a 1.4GHz Snapdragon 430 processor; 2GB or 3GB of RAM; 16GB or 32GB of inbuilt storage; option to expand further via a microSD card slot (up to 128GB); 2800mAh removable battery with support for fast charging. As for optics, the Moto G5 sports a 13-megapixel rear camera with PDAF, f/2.0 aperture, and dual-LED flash, and a 5-megapixel wide-angle front camera for selfies.

LG G6, the company’s 2017 flagship, was also launched at MWC 2017, featuring Google Assistant and the ageing Snapdragon 821 chipset. The new LG G6 has a 5.7-inch QHD+ FullVision display with a 18:9 (or 2:1) aspect ratio, and introduces the new UX 6.0 interface. The smartphone features 4GB RAM, 3300mAh battery, and Android 7.0 Nougat software. It will be launched in Spring this year in two storage options - 32GB and 64GB.

The new LG G6 has a dual rear camera setup with two 13-megapixel sensors - one for wide-angle shots with 125-degree lens and f/2.4 aperture, and the other for regular shots with 71-degree lens and OIS 2.0. At the front, the smartphone sports a 5-megapixel wide-angle lens with f/2.2 aperture and 100-degree lens. At the keynote, LG also showcased its new Square Grid feature for the camera while also confirmed that the front camera comes with autofocus.

While LG G6 is stuck with Snapdragon 821, Sony Xperia XZ Premium became the first phone with the new Snapdragon 835. However, the new Sony phone will not be available to purchase till Spring this year as Samsung reportedly has dibs on the new Qualcomm Snapdragon 835 SoC. The new Sony Xperia XZ Premium has a 5.5-inch 4K display, Android 7.0 Nougat operating system, 4GB RAM, 64GB internal storage, up to 256GB microSD card support, and a 3230mAh battery.

The new Sony Xperia XZ Premium camera on the back has a 19-megapixel sensor with the company’s new Motion Eye camera system (based its new memory stacked 1/2.3-inch Exmor RS CMOS sensor) that provides 5x faster image scanning and data transfer. This means you can create videos by recording in 960 frames per second, providing Super slow motion video playback that is apparently four times slower than other smartphones in the market. There's also a 13-megapixel front camera with 1/3.06-inch Exmor RS sensor for selfies.

Sony Xperia XZs is the smaller variant of 2016’s Xperia XZ smartphone and sports a 5.2-inch (1080x1920 pixels) Triluminos display. It is powered by the Qualcomm Snapdragon 820 processor with Adreno 510 GPU and 4GB RAM. The new Sony smartphone offers 32GB and 64GB of internal storage options with the option to expand further via microSD slot (up to 256GB). Like the current Sony flagship, this smartphone also has a 19-megapixel rear camera and 13-megapixel selfie snapper.

The battery capacity of Sony Xperia XZs is rated at 2900mAh, and the device measures 146x72x8.1 mm, and weighs 161 grams. All of the other Sony Xperia XZs specifications are identical to that of Xperia XZ Premium. The smartphone will be available in select markets from April onwards in Ice Blue, Warm Silver and Black colours.

The big highlight of Sony Xperia XA1 Ultra is the cameras at the back and front. At the rear, there is a 23-megapixel Exmor RS image sensor with hybrid autofocus, 24mm wide-angle lens, f/2.0 aperture, 5x zoom, and HDR mode. The Sony Xperia XA1 Ultra bears a 16-megapixel Exmor RS sensor at the front with front flash, 23mm wide-angle lens, f/2.0 aperture, OIS, and autofocus. The battery is a 2700mAh, and the smartphone runs on Android 7.0 Nougat. Connectivity options include LTE (4G), LTE Cat6/4, GSM GPRS/EDGE (2G), and UMTS HSPA+ (3G). 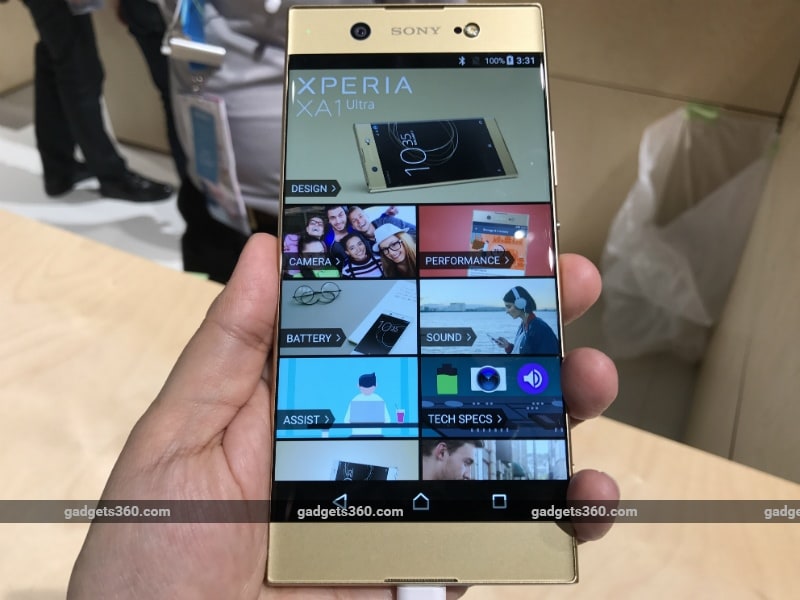 The smaller Sony Xperia XA1 smartphone features a 5-inch HD (720x1280 pixels) display, packs a 3GB RAM, 32GB of internal storage, and offers a 2300mAh battery. The Sony Xperia XA1 front camera is at 8-megapixel unit with no front flash or OIS. All the other Xperia XA1 specifications remain the same as that of Xperia A1 Ultra. Both the smartphones will be made available in Spring in White, Black, Pink, and Gold colours. 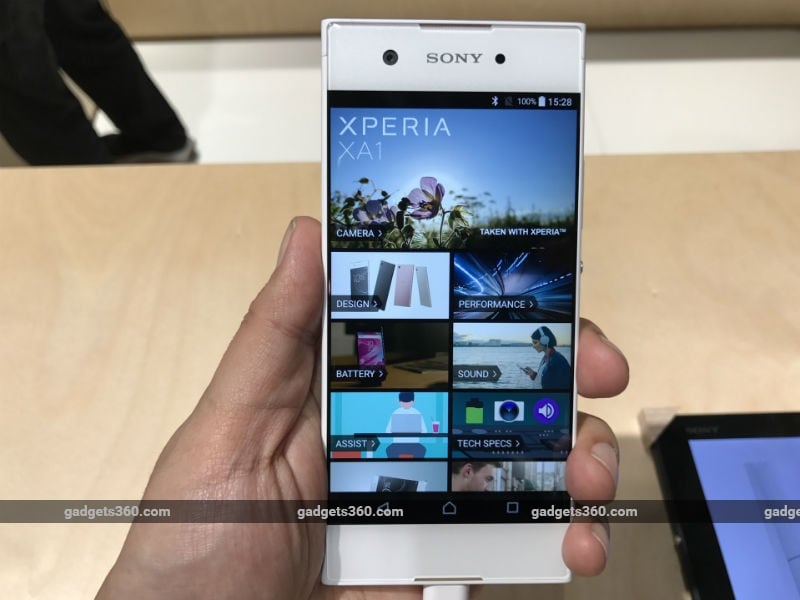 The last smartphone designed and developed in-house by the Canadian company, BlackBerry KEYone features a keyboard with the fingerprint sensor on the spacebar and capacitive touch on the entire keyboard for scrolling. The new BlackBerry KEYone sports a 4.5-inch full-HD display and runs Android 7.1 Nougat OS with software features such as BlackBerry Hub and DTEK security monitoring app. The phone is claimed to get additional durability from its aluminium frame.

BlackBerry KEYone offers 32GB of inbuilt storage that is expandable via microSD card (up to 2TB). The new KEYone comes with standard set of connectivity options, including 4G LTE, Wi-Fi 802.11ac, Bluetooth v4.2, NFC, 3.5mm headphone jack, and a USB Type-C port. It runs on a 3505mAh battery that's said to give all-day battery life and support QuickCharge 3.0 with a 'Boost' charging feature that gives 50 percent charge in "roughly 36 minutes."

The new Huawei P10 and P10 Plus are powered by the HiSilicon Kirin 960 SoC with integrated Cat 2/11 modem and Mali-G71MP GPU. The P10 packs 4GB RAM and 64GB storage, while the P10 Plus comes in 4GB RAM/ 64GB storage and 6GB RAM/ 128GB storage options. There's also support for microSD cards for further expansion (up to 256GB).

Both the smartphones sport a dual camera setup with one 20-megapixel sensor that takes in monochrome details, and another 12-megapixel sensor that takes in RGB details. The camera supports 4K video, 3D facial recognition, OIS, 4-in-1 hybrid autofocus, hybrid zoom, and even bokeh effect in mono mode. In the camera app, a slew of modes are available for different conditions with one professional mode as well that allows for manual control of ISO, exposure, RAW output, shutter speed, white balance and more. The front camera is at 8-megapixel with f/1.9 aperture and 2x brightness.

The dual-SIM devices (Nano + Nano/ microSD) run on the new Android 7.1 Nougat-based EMUI 5.1 OS, and connectivity options include 4.5G LTE with 4x4 MIMO Technology for faster speeds (exclusive to P10 Plus), 802.11a/b/g/n/ac, Bluetooth 4.2, USB Type-C, GPS, and DLNA. Also, both phones support fast charging, and Huawei claims that 30 minutes of charging can keep the lights on for up to a day. 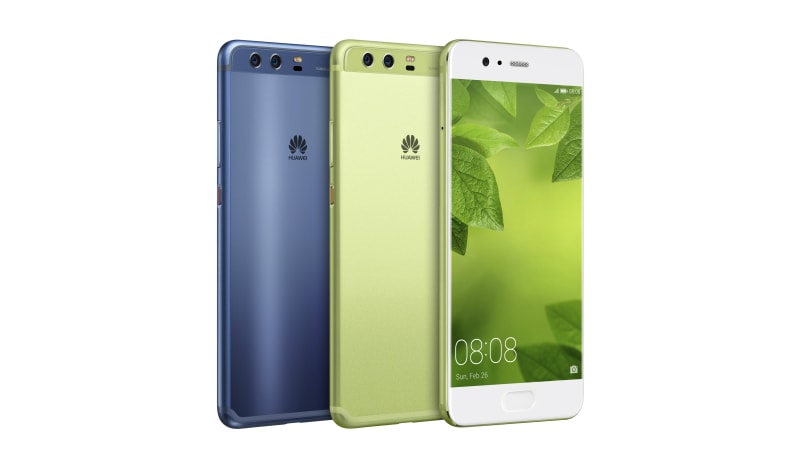 While 5G ultra-fast Internet networks are not expected to arrive in full force till 2020, ZTE has already announced the 5G-compatible Gigabit Phone. The Chinese company says that its Gigabit Phone is the first smartphone capable of download speeds reaching up to 1 gigabit per second (Gbps) - up to 10 times faster than the first generation of 4G services widely in use today. The new ZTE Gigabit Phone is powered by the Snapdragon 835 chipset and comes with 4x4 MIMO antenna technology, 256-QAM modulation. Its high-speed Internet access will find applications in 360-degree panoramic Virtual Reality videos and faster downloads of ultra Hi-Fi music and videos.

Another ZTE phone at MWC 2017 is the Nubia N1 lite, unveiled under the umbrella of the Nubia brand. The new Nubia N1 lite runs Android 6.0 Marshmallow out-of-the-box and sports a 5.5-inch HD display. It is said to be powered by a quad-core processor backed by 2GB RAM, and is said to have 16GB internal storage. In terms of optics, the Nubia N1 lite sports an 8-megapixel rear camera with an f/2.0 aperture tagged with dual-LED flash and a 5-megapixel camera at front. Its battery capacity reportedly stands at 3000mAh.

Gionee A1 and A1 Plus combine two niches of the smartphone industry – selfie phones and big battery phones. Launched at MWC 2017, the new Gionee A1 has a 16-megapixel front camera and 4010mAh battery, while the Gionee A1 Plus comes with a 20-megapixel sensor in front and packs a 4550mAh battery.