Motorola One Fusion+ vs Poco X2 Comparison: Can Motorola Win?

Poco X2 or Motorola One Fusion+ which one would you pick? 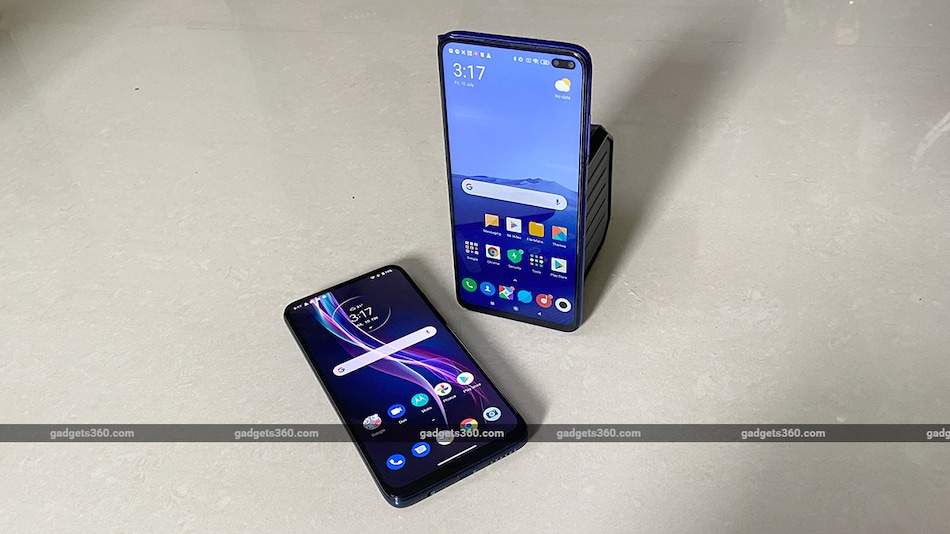 The Poco X2 has a glass back which gives it a premium look and feel. Poco has used bright colours and gradient finishes for the rear panel, which gives the X2 a distinct look. It has a reflective circular patch at the back with a pill-shaped camera module in the centre that protrudes a bit.

At the front, it has a 6.67-inch display with dual selfie cameras using a hole-punch design. The display is huge, and reaching all corners of the panel isn't possible in single-handed use. Poco has placed all the buttons on the right. The power button has an integrated fingerprint scanner. The volume buttons are above this, and I found that they needed a bit of a stretch to reach. The Poco X2 has an IR emitter at the top that's placed next to the secondary microphone. It has a bottom-firing speaker, USB Type-C port, and 3.5mm headphone jack.

The Motorola One Fusion+ is very different in comparison. It sports a smaller 6.5-inch display without any notch or hole, and has a pop-up selfie camera instead. This gives you an uninterrupted view of the display. The back of the Motorola One Fusion+ is plastic, so it does not have the same premium look and feel as the Poco X2. The Motorola One Fusion has four rear cameras just like the Poco X2 but these are placed in two different modules towards the left of the rear. There is a fingerprint scanner on the rear as well, with the iconic Motorola logo on it. The scanner is well placed and easy to reach.

Motorola has also placed all the buttons on the right of the device and I found the power and volume button placement to be a lot better than on the Poco X2. The Motorola One Fusion+ also has a dedicated Google Assistant button that's higher than the others. The One Fusion+ has the SIM tray at the top next to the pop-up selfie camera, while the loudspeaker, USB Type-C port, and 3.5mm jack are at the bottom.

Both the phones sport big batteries: the Motorola One Fusion+ leads with a 5,000mAh battery but the Poco X2 isn't far behind with a 4,500mAh capacity. Motorola ships an 18W Turbocharger in the box whereas Poco ships a faster 27W charger.

Both smartphones have seen bumps in price since their launches. The Poco X2 has increased in price twice with the most recent revision coming last month. The Motorola One Fusion+ also got a price increase very shortly after its launch.

The Poco X2 sports a bigger 6.67-inch LCD display while the Motorola One Fusion+ has a slightly smaller 6.5-inch display. Both panels are HDR10 certified, however, the Poco X2 has a higher refresh rate which leads to a smoother experience when enabled. You also get the option to tweak the colour output of both displays. The Poco X2 uses Corning Gorilla Glass 5 for protection whereas Motorola does not offer any sort of protection for the display.

Both the Poco X2 and the Motorola One Fusion+ have dual 4G VoLTE capabilities and both have hybrid dual-SIM slots. This means that storage expansion comes at the cost of the second SIM. While 128GB of storage should be adequate, the Poco X2 offers higher storage options that the Motorola One Fusion+ lacks. Both smartphones support Bluetooth 5, dual-band Wi-Fi, and multiple navigation systems.

The Motorola One Fusion+ and the Poco X2 both run Android 10, and our review units of both phones were running the April security patch at the time of this comparison. The Motorola One Fusion+ has a UI that's very close to stock Android, and a few gesture-based shortcuts called Moto Actions have been added. It does not have any preinstalled bloatware or any significant customisation. Poco, on the other hand, offers a fair amount of customisations and there's some bloatware on the device. We also encountered spammy notifications on the Poco X2 when we reviewed it. Both these smartphones have customisations which suppress notifications while you play games. I prefer the clean near-stock Android approach that Motorola has taken.

Both smartphones' screens get bright enough when outdoors, but while watching videos I found the Motorola One Fusion+ to have the better output with superior contrast. The bottom-firing speaker on this device is also louder which adds to the overall experience.

You will be able to game on either device easily. Both defaulted to high preset in PUBG Mobile and could run the game without any lag or stutter. Battery life on these smartphones is also similar and you will be able to go about a day and a half before needing to charge either of them. In our HD video loop test, it was the Motorola One Fusion+ that came out on top thanks to its higher capacity battery, managing 15 hours and 45 minutes. The Poco X2 on the other hand managed 13 hours and 45 minutes. Charging times are different, and the Poco X2 benefits from its faster charger and a smaller battery.

I shot several photos using both smartphones in the same conditions to see how they fare. Both were quick to lock focus and meter light in the daytime. These devices also managed very good details but the AI on the Poco X2 was a tad too aggressive for my liking, bumping up the contrast excessively. The wide-angle camera on the Poco X2 fared better, delivering better details compared to the Motorola One Fusion+, and surprisingly the colours weren't boosted aggressively.

For macros, the Motorola One Fusion+ produced better details thanks to its higher resolution sensor.

For low-light closeups it was the Motorola One Fusion+ that performed better with more natural-looking colours and better details.

The hardware of the Motorola One Fusion+ and the Poco X2 is pretty evenly matched, especially considering that both these phones use the exact same processor. If you prioritise looks and design on a smartphone, the Poco X2 will grab your attention thanks to its premium design and shiny colour variants.

The Motorola One Fusion+ excels elsewhere, offering a better display coupled with a louder speaker and cleaner software. It does not have any bloatware preinstalled and you won't be bombarded by spammy notifications. The cameras are a bit of a mixed bag though, and both smartphones could do with some improvements through software updates.