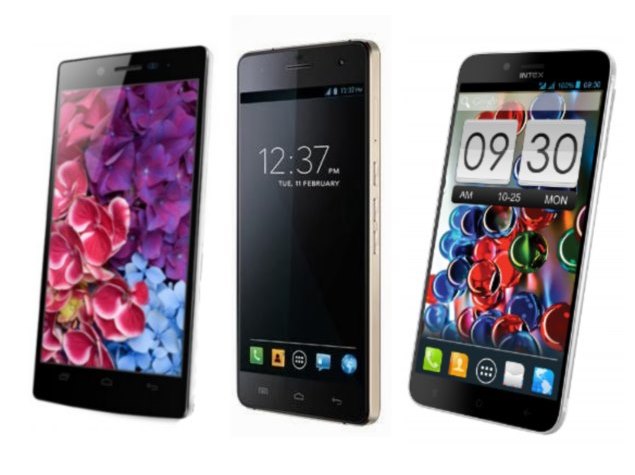 The octa-core MediaTek MT6592 processor is showing up in more and more phones these days, and buyers seem to be impressed. It wasn't too long ago that we were just becoming acquainted with the idea of a dual-core smartphone processor, but now everyone's racing to raise that number as far as possible.

We've already seen that even though the MT6592 is designed around eight relatively weak ARM Cortex A7 cores, it can outperform the quad-core processors that power many of today's mid-range and high-end phones. Where it lags behind is in graphics performance, thanks to the integrated Mali 450 MP which isn't very fast.

We have so far reviewed three mid-range smartphones based on this processor: the Intex Aqua Octa, the Wickedleak Wammy Passion X, and the Micromax Canvas Knight. Each of these has its own strengths and weaknesses. If you're specifically interested in buying an octa-core phone today, our head-to-head comparison will tell you which of them is the best choice for you.

Build and design
The device that stands out here - and not in a good way - is the Wammy Passion X, due to the use of low-quality plastic. The build quality is much rougher than the general standard of phones on the market today; even those from Indian brands. On the other hand, it does have a "super-hydrophobic" coating which is designed to repel droplets of water. The company claims this phone can survive a significant amount of exposure to liquid, and it is confident enough to offer a warranty that covers immersion in liquids for around 30 minutes.

The Aqua Octa is better, but still a bit unpolished, with rickety buttons and low quality printing. It's also the bulkiest of the three, at 180g.

The Micromax Canvas Knight can boast of better looks and build quality than either of its competitors. Its shape is more modern and comfortable too. It's almost understated, and makes us feel that Micromax has started taking design more seriously.

The Aqua Octa comes with a flip-cover case and a clear plastic screen guard. In contrast, the Wammy X doesn't even come with a headset. The Canvas Knight comes with the standard headset and charger combination.

Screen
Both, the Wammy X and the Canvas Knight have 5-inch, 1080p full-HD screens, while the Aqua Octa's screen is both larger and lower resolution. This makes it far less attractive, but also gives it an edge in graphics benchmarks, since there are fewer pixels to push out for each frame. 720p is respectable for a mid-range smartphone, but not when the competition has full-HD display as in this case.

1080p is wonderfully sharp, and the Android UI scales well, with icons and text that aren't too small to be readable. After using one of these screens, 720p will feel like a bit of a downgrade. Between the two 1080p displays, the Micromax Canvas Knight is definitely better.

Camera
In this category, the Aqua Octa and Wammy X are evenly matched with 13-megapixel cameras, while the Canvas Knight gets a bump up to 16 megapixels. In terms of actual quality, the former two are also somewhat even in daylight, but the Aqua Octa's low-light performance is inferior. The Canvas Knight does have a bit of an edge, but you can't expect point-and-shoot quality in smartphones at this price point anyway.

Software/UI
All three devices run Android 4.2, and any chance of an update will be determined by MediaTek, which will have to ensure that its platform is fully compatible. However, there are significant differences between all three platforms.

Micromax has undertaken the most extensive customisation, including skins for several parts of the UI as well as a handful of useful preloaded apps, including Kingsoft Office and some games. Wickedleak, on the other hand, uses a Chinese OEM firmware and bundles a few unhelpful Chinese-language apps, along with very minor visual customisation. Intex includes a few apps that might come in handy, but also some that feel like cheap advertising, and games that require you to pay up after a few initial turns.

Performance
Thanks to its lower resolution screen, the Aqua Octa performed better in a few of our benchmark tests. That isn't a fair indicator that it's actually better than the other two, but in terms of user experience, those who don't notice the reduction in resolution will definitely appreciate the smoother frame rate.

Performance was consistent between the three, although the Canvas Knight had a slight advantage in CPU-bound tests.

Conclusion
The Wickedleak Wammy Passion X comes out looking like the weakest of the three, although it is the only one to offer the unique hydrophobic coating, which is more valuable to some people than appearance or speed. We would like to see the company work on build quality though. Since the time of its review not too long ago, the price has dropped significantly to Rs. 16,990, so buyers might be willing to overlook that.

The Intex Aqua Octa costs around Rs. 18,000, and has an inferior screen but better build quality. If you like outsized phones and are on a budget, this is an option to consider. We expect the price to dip a bit lower, which will make it more attractive.

The Micromax Canvas Knight doesn't really distinguish itself in terms of camera quality or software. Interestingly, its price of Rs. 19,999 makes it only slightly more expensive than the others, and should prove to be worth it for those who are more particular about performance, appearance and build quality.

It's easy to see that the Canvas Knight is the best of the three overall. We'd prefer it over the other two in almost every case. If you're sorely strapped for cash or find water resistance appealing, you could consider the Wammy X. Just make sure you check it out in person before you make the actual purchase.