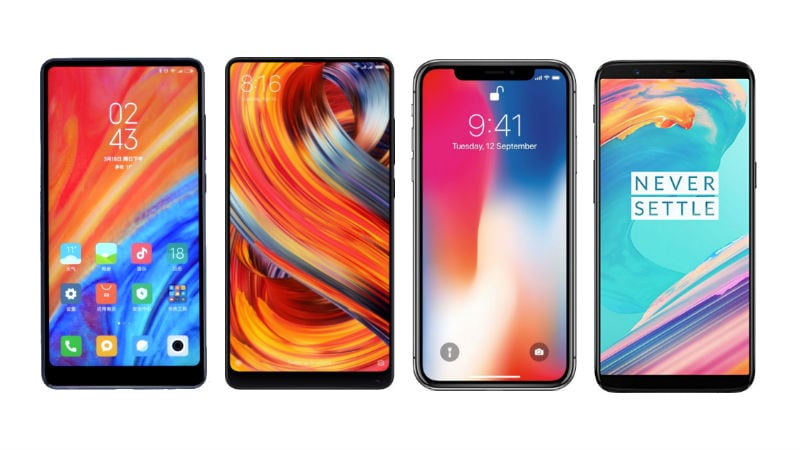 Unlike iPhone X, the new Mi MIX 2S does not feature a notch

Xiaomi on Tuesday unveiled the Mi MIX 2S as the successor to its iconic Mi MIX 2 bezel-less display flagship. The new Xiaomi smartphone has a thin-bezel design, similar to its predecessor, and comes in a ceramic body. Mi MIX 2S also includes artificial intelligence (AI) based camera features to take on the competition. But from the first glance, at least from the front, it is difficult to say that Xiaomi has done much different from the last year's model. It was originally rumoured that the new Mi MIX 2S will sport an iPhone X-like notch on the front, but the company ultimately retained the original bottom panel position of the front camera.

Alongside its similarities with the Mi MIX 2, the Mi MIX 2S has a bunch of features, including its bezel-less display panel and Qi wireless charging support, that are aimed to rival the iPhone X. The smartphone also notably includes a vertically placed dual rear camera setup that matches its appearance with the latest iPhone model. The new Mi MIX handset is also designed to counter the OnePlus 5T that has become a bit dated, but was launched to compete in a market actively adding new near-bezel-less display smartphones. Nevertheless, the OnePlus flagship is regularly receiving software updates to meet the competition. For instance, it recently added assistive light to enhance facial recognition and iPhone X-like gesture controls. The OnePlus 5T also received Android 8.0 Oreo-based Oxygen 5.0.2 update last month.

So, what are key distinctions between the Mi MIX 2S, Mi MIX 2, iPhone X, and OnePlus 5T? We've detailed them here to help you pick the best option.

The Mi MIX 2, on the other hand, was launched in India in November at Rs. 35,999. Xiaomi of late reduced its price to Rs. 32,999. The handset is available for purchase in the country via Flipkart and Mi.com.

Similar to the price of the Mi MIX 2, the OnePlus 5T price in India starts at Rs. 32,999 for the 6GB RAM, 64GB inbuilt storage variant, while the 8GB RAM, 128GB storage variant is priced at Rs. 37,999. Both come in Midnight Black colour options and are available through Amazon and the OnePlus Store. OnePlus brought Star Wars Edition and Lava Red colour options for the OnePlus 5T, however both were made available for a limited time and aren't on sale now.

Contrary to the mid-range prices of the Android options, the iPhone X price in India starts at Rs. 89,000 for the 64GB storage variant. The iPhone X 256GB price, on the other side, is set at Rs. 1,02,000. Both come in Silver and Space Grey colour options and available for purchase through major e-commerce sites and offline retailers across the country.

The dual-SIM (Nano) Mi MIX 2S runs MIUI 9 and features a 5.99-inch full-HD (1080x2160 pixels) display with 18:9 aspect ratio. The handset is powered by an octa-core Qualcomm Snapdragon 845 SoC, coupled with Adreno 630 GPU and either 6GB or 8GB LPDDR4X RAM options. The dual rear camera setup on the Mi MIX 2S sports two 12-megapixel image sensors with 1.4-micron pixels. One of the two sensors has an f/1.8 aperture, wide-angle lens and four-axis OIS (Optical Image Stabilisation), while the other one has an f/2.4 aperture and a telephoto lens to enable optical zoom. The rear camera setup supports AI-based scene recognition and includes features such as dynamic Bokeh, smart artifact, business card recognition, and face recognition among others. Also, the camera setup has a dual-core PDAF. The Mi MIX 2S has importantly received a DxOMark Mobile score of 101, the same as the iPhone X. On the front, the smartphone has a 5-megapixel camera with HDR features and Face Unlock support.

Similar to the Mi MIX 2S, the dual-SIM Mi MIX 2 (Review) runs MIUI 9 and features a 5.99-inch full-HD (1080x2160 pixels) display with 18:9 aspect ratio. The smartphone is powered by an octa-core Qualcomm Snapdragon 835 SoC, coupled with 6GB of LPDDR4X RAM. Unlike the dual camera setup featuring on its new model, the Mi MIX 2 has a single, 12-megapixel camera sensor on the rear with four-axis OIS, five-piece lens supporting f/2.0 aperture and including a facial recognition feature. The front of the smartphone has a 5-megapixel camera.

Coming to the OnePlus 5T (Review), the dual-SIM smartphone debuted with Android 7.1.1 Nougat-based OxygenOS 4.7, though it received an update to Android 8.0 recently. It sports a 6.01-inch full-HD (1080x1920 pixels) Full Optic AMOLED display with an 18:9 aspect ratio and 2.5D Corning Gorilla Glass 5 protection. Under the hood, there is an octa-core Snapdragon 835 SoC, paired with either 6GB or 8GB of LPDDR4X RAM. The smartphone has a dual camera setup with a 16-megapixel primary image sensor with an aperture of f/1.7 and a 20-megapixel secondary sensor. OnePlus has also deployed 'Intelligent Pixel Technology' to enhance low-light image results. On the front, the smartphone has a 16-megapixel sensor. The smartphone has 4G VoLTE, Wi-Fi 802.11ac, Bluetooth v5.0, GPS/ A-GPS, USB Type-C, and a 3.5mm headphone jack. Lastly, it packs a 3300mAh battery that supports Dash Charge fast charging technology.

The single-SIM iPhone X (Review) runs iOS 11.2.6 and features a 5.8-inch (1125x2436 pixels) Super Retina display. It has a hexa-core Apple A11 Bionic SoC, coupled with 3GB of RAM and 64GB/ 256GB onboard storage options. The back of the iPhone X has a dual rear camera setup with two 12-megapixel sensors - with one featuring f/1.8 aperture and the other one has an f/2.4 aperture. There is also a quad-LED True Tone flash. For selfies and FaceTime support, there is a 7-megapixel image sensor on the front with Portrait mode. The iPhone X also has a TrueDepth system that throws thousands of Infrared dots to unlock the device using the Face ID feature.