Meet the Future Phones That Fold Up, Have 9 Cameras, and Charge Over Thin Air

Your next smartphone might just throw you a curve.

Picture this: You pull your phone out of your pocket and unfold it like a napkin into a tablet. You press your finger on the screen, and it unlocks. You switch to the camera app, and a spider-like array of lenses shoot simultaneously to capture one giant photo.

These are all things I've seen phones do - some in prototype form, others in models you can get only in China. Analysts in Korea say we might see a folding "Galaxy X" phone from Samsung as soon as next year. When I look into my crystal ball, I'm convinced we're on the cusp of the most significant changes to the design and functionality of smartphones since they first arrived.

The shake-up couldn't come soon enough. You probably couldn't live without your phone but feel as excited about it as you do running water. And the water company doesn't hold an event every year to hype slimmer faucets. From the front, the iPhone 8 is pretty much indistinguishable from the iPhone 6 that came out nearly four years ago. Americans are holding onto old phones longer than ever - 25.8 months, according the most recent research from Kantar Worldpanel.

The tech industry has been doubling down on software and artificial intelligence capabilities, which still hold huge potential. But there's a lot to be done on improving phone hardware, too, the number one reason most people upgrade.

Longtime tech analyst and futurist Tim Bajarin, of Creative Strategies, tells me he's also excited by what he sees coming. "When we turn the corner on the next decade, that is when we will start to see a revolution in everything from flexible displays to glasses," he says.

So I went on a hunt for new technologies in China (where phone makers are more creative), among start-ups and at industry conferences where the likes of Samsung and Apple find new components. Of course, it's hard to predict what ideas will stick and what will end up being a gimmick. I looked for ideas that could make phones simpler to use, easier to carry and better for watching video and doing work. And, of course, I looked for anything that might make batteries last long enough to bring an end to the contact sport of hunting for an airport outlet.

Here are ideas that will, at the very least, make your next phone interesting. Or if not your very next phone, then the one after that.

Fingerprint scanners go inside
The big idea: You can have it all: a phone that's entirely screen on front and a fingerprint scanner still right where it belongs. When full-screen phones came into fashion, some Android phones moved this key function to the back. Apple killed the home button entirely with its full-screen iPhone X, opting for face-scanning sensors that some (including yours truly) find fail just enough to be annoying.

Recent breakthroughs let phone makers embed the fingerprint reader inside the screen. Just press your finger over the right area of the screen - indicated by a thumbprint image - and the phone unlocks. Component maker Synaptics figured out how to take a picture of fingers by looking in between the phone's pixels; Qualcomm created an ultrasonic sensor capable of scanning not only though screens but also metal . . . and even underwater. So far, the tech has made its way into phones from Chinese makers Vivo and Xiaomi.

Before you get too excited: The in-screen reader was a bit more finicky than traditional scanners when I tested it on the Vivo X21, one of the first phones to offer it. And, Apple people, don't hold your breath this will ever come to a new iPhone. Apple has said it thinks Face ID is the future, and it doesn't often revert course.

When will I get it? In the United States, I think we'll see it on a phone within the next year. The Korean tech media report that Samsung "confirmed" to industry partners it would use an in-screen scanner in its Galaxy S10, though no executives have said so to me.

Cameras sprout more lenses
The big idea: Phone snaps could soon compete in quality with big-honking-lens cameras. How? By covering the back of the phone with a bunch of small lenses that shoot simultaneously - and then stitch it into one big photo.

We've already seen a version of this in Apple and Samsung phones with two lenses on the back. The second helps with zoom shots and measuring depth to create photos with artistically blurry backgrounds. The P21 Pro flagship from Huawei is the first to include three lenses: one colour, one monochrome (to help with depth and lowlight situations), and one 3x zoom.

A camera maker called Light has taken this idea furthest. It showed me concept and working prototype phones with between 5 and 9 lenses - yes, 9 - on the back. It says its phone design is capable of capturing 64 megapixel shots, better low-light performance and sophisticated depth effects.

Before you get too excited: All those lenses - and the processor power required to stitch together all those individual shots - don't come cheap. A stand-alone camera from Light with 16 lenses costs $1,950 (roughly Rs. 1.34 lakhs).

When will I get it: Light, which counts giant phone manufacturer Foxconn as an investor, says a smartphone featuring its multi-lens array will be announced later this year.

Screens fold up
The big idea: We once had flip phones. Now here come the flip tablets. At a display industry conference in May, the buzz was about prototypes of screens that were flexible enough to roll and flap in the wind. One firm, called BOE, showed a gadget it dubbed a "phoneblet" with a 7.5 inch screen that folded, without seams, into a phone and back again . . . without breaking. Fans of the HBO show "Westworld" might have seen the sci-fi equivalent in the folding tablets characters use to control killer robots.

It's been coming for at least a decade. Samsung showed a wowee folding phone concept video at CES in 2013. The first bendable screens went into curved TVs and phones that round at the edges. We've now crossed a threshold where we can make screens that bend repeatedly - and soon we'll be able to fold screens as sharply as a piece of paper, said Helge Seetzen, the president of the Society for Information Display.

How does that work? BOE says it got rid of the traditional colour filter and backlight, and replaced rigid glass with plastic. Bending doesn't break the pixels because each one is so tiny; it's like how a single human can walk seemingly flat on the earth even though it curves.

Before you get too excited: Working prototypes are one thing - producing millions of screens that can reliably fold and unfold is much tougher. Anything with hinges (hidden behind the screen) could be easier to break than our current solid devices. But one silver lining: Moving to plastic could make phones and tablets more shatter-resistant, even if they might be easier to scratch.

When will I get it: We'll see foldable devices in the next year, though the first ones may have seams. Some analysts think Samsung's folding phone (nicknamed the "Galaxy X") will start production in November, and will cost $1,850 (roughly Rs. 1.27 lakhs) when it debuts in 2019. Seetzen says screens that fold like paper are five years away.

Batteries charge over thin air
The big idea: Battery life is the biggest problem with today's phones. Now imagine if you rarely had to think about your battery because your phone was constantly charging itself. This is going to sound a little crazy, but researchers have figured out ways to beam low levels of power through the air. Firms such as Energous and Ossia send power using radio frequencies, while rival Wi-Charge uses infrared light that's closer to lasers. 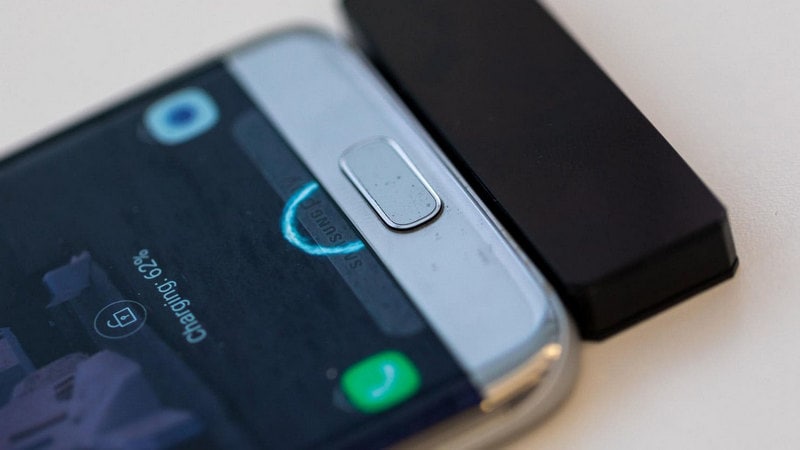 A prototype Wi-Charge adapter lets this phone juice up sitting on a table -- without any plugs.
Photo Credit: Washington Post photo by Geoffrey A. Fowler

I've seen functional prototypes of both technologies. For these over-air charging systems to work, of course, you have to be in a room outfitted with transmitters. Energous says those might first get embedded into other gadgets, such as computers and speakers, so they could charge gadgets nearby. Wi-Charge says it is looking to go into light fixtures.

Wait, will any of this fry us? The makers of the tech say no because they're using such low levels of power. It's true we're already surrounded by energy from radio waves and the sun. Energous says it doesn't expose bodies to more radiation than cellphones, and WiPower automatically cuts out if anything gets between its transmitter and receiver.

Before you get too excited: None of this wireless charging tech is nearly as fast as plugging in your phone, though arguably that's less important if your phone charges all day. And companies have been promising this sort of technology for years. They're finally clearing regulatory hurdles, but now have the double challenge of getting gadget makers to use it - and figuring out how to get transmitters into homes, airports and coffee shops.

When will I get it: Energous says hearing aids supporting a first version of its tech (which requires closer contact) are coming in a matter of weeks. It says devices that charge over medium and larger distances are more likely by 2019 or 2020. Wi-Charge says it hopes to sign up gadget makers as soon as next spring.

Glasses so you don't have to look at your phone
The big idea: Glasses are the "what comes next" that the tech industry is counting on, because they would let us remain online without looking down at screens. Start-up Magic Leap raised more than $2.3 billion (roghly Rs. 15,800 crores) to make a "lightweight, wearable computer" that looks like a pair of welding glasses. Apple has also applied for patents for glasses tech, and CEO Tim Cook frequently talks up the potential of augmented reality, the technology that merges computer images with the real world. (A form of AR tech is what powered the Pokémon Go craze.) 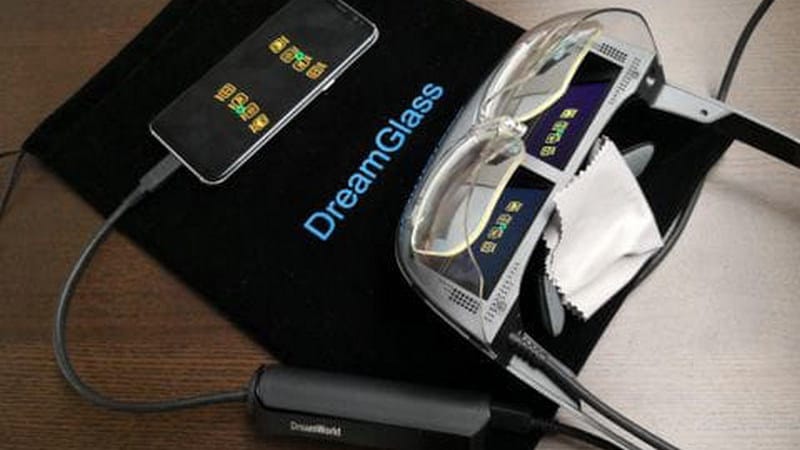 The $400 DreamGlass displays apps running on a tethered phone inside glasses
Photo Credit: Courtesy of DreamWorld

Early AR glasses are already coming out. I tried one from a start-up called DreamWorld that offers a 90 degree field of view and responded to my hand gestures. It weighs only about half a pound, because it plugs into a phone that does the processing and holds the battery. Smart glasses are likely to require nearby phones until the parts shrink enough to let them replace phones entirely.

Before you get too excited: Wasn't Google Glass a flop? Yes. Very few people want to walk around wearing a face computer. And then we have new social norms to figure out, such as: If your glasses are taking a picture of - or looking up information about - a person, how do you let them know?

When will I get it: DreamWorlds' DreamGlass is available now for $400 (roughly Rs. 27,500). More consumer-friendly glasses that don't require wires or heavy gear are at least 5 years out. Magic Leap has promised to ship a developer-focused version of its Magic Leap One at some point this year.

Meet the Future Phones That Fold Up, Have 9 Cameras, and Charge Over Thin Air
Comment
Read in: தமிழ்