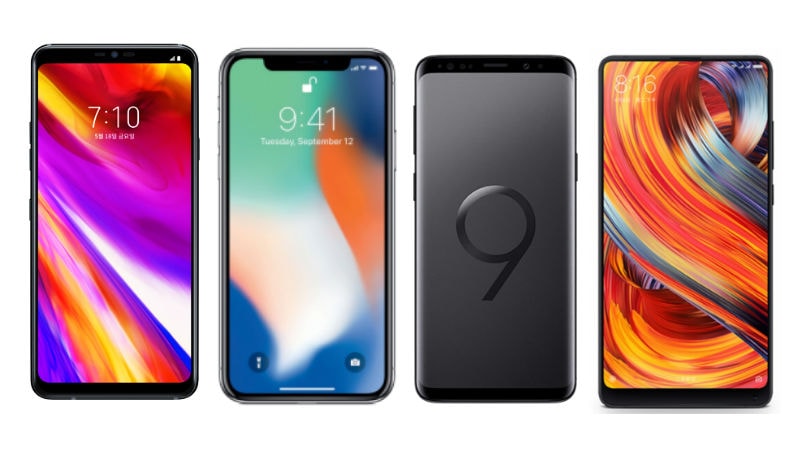 LG G7 ThinQ and LG G7+ ThinQ smartphones have been launched as the latest handsets from the South Korean technology giant. With the announcement, LG appears to be finally ready to join the other big players in the 2018 flagship party, including the handsets from Samsung and Apple. The new smartphones come with the popular iPhone X-like notch, wireless charging support, Qualcomm Quick Charge 3.0, face recognition, and more features. LG G7 ThinQ has also borrowed AI Camera features from the recently launched variant, the LG V30S ThinQ. In terms of hardware, it is quite comparable with the Samsung Galaxy S9. Likewise, it sports a notch design that reminds us of the iPhone X. While the LG G7 ThinQ seems like a promising smartphone for the top-tier buyers, it still faces a lot of competition in the market, including latest entrants like Xiaomi Mi MIX 2S.

The LG G7 ThinQ sports a Google Assistant and Google Lens button, Super Far Field Voice Recognition, DTS:X, Bokeh effects, Live Photo, and more such features. However, the Apple iPhone X that was launched way back in September 2017 is still one of the most popular and powerful handsets in the world, with features like an edge-to-edge display (with a notch), the Apple A11 Bionic SoC, and a vertical dual rear camera setup. Meanwhile, in the Galaxy S9, Samsung had packed features such as Super Slo-Mo videos, dual-aperture in primary camera, motion detection, AR Emoji, and the Bixy Vision. Similarly, when Xiaomi launched the Mi MIX 2S, it touted features such as Qi wireless charging, AI-based camera app with dynamic Bokeh, Google ARCore support and more.

To see if the LG G7 ThinQ will be able to compete with its rivals, we compare the price and specifications of the smartphone with iPhone X, Galaxy S9, and Xiaomi Mi MIX 2S.

The LG G7 ThinQ has just been announced and its prices have not been revealed yet. However, the specifications suggest that it will be a premium handset. We can expect the pricing details to be announced locally closer to availability. It will initially arrive in South Korea, followed by availability in major markets in Asia, North America, Europe, and Latin America in the coming days. The G7 ThinQ will be sold in New Platinum Grey, New Aurora Black, New Moroccan Blue, and Raspberry Rose colour variants.

The iPhone X, on the other hand, is available in India in 64GB and 256GB variants at Rs. 89,000 and Rs. 1,02,000, respectively. Apple iPhone X price in India is Rs. 95,390 for the 64GB variant and Rs. 1,08,930 for the 256GB variant; prices were recently hiked after the Indian government increased custom duty on import of mobile phones. The handset is currently sold in India in Space Grey and Silver colour variants, and can be purchased across multiple online and offline Apple resellers.

When it comes to the Samsung Galaxy S9, the smartphone is available with a price tag of Rs. 57,900 for the 64GB storage variant, Rs. 61,900 for the 128GB variant, and Rs. 65,900 for the 256GB variant. The 64GB and 256GB variants are already available for purchase via various retail outlets, the Samsung Shop, and Flipkart in Lilac Purple, Coral Blue, and Midnight Black colour options.

In terms of optics, the LG G7 ThinQ features a dual rear camera setup with a 16-megapixel primary Super Wide Angle sensor that has f/1.9 aperture and a 107-degree wide-angle lens, and another 16-megapixel secondary sensor that comes with f/1.6 aperture and a 71-degree lens. On the front, the handset gets an 8-megapixel wide-angle sensor with f/1.9 aperture and 80-degree lens. There is 64GB of inbuilt storage on the G7 ThinQ and 128GB on the G7+ ThinQ. Both the models have expandable storage via microSD card (up to 2TB). The smartphone is fuelled by a 3000mAh battery.

In terms of optics, the iPhone X sports a dual rear camera setup with two 12-megapixel sensors that come with Optical Image Stabilisation (OIS). On the front is a 7-megapixel FaceTime HD camera for selfies and video calling. The phone has a 2716mAh battery powering the internals.

The smartphone bears a vertical dual rear camera setup with the flash in between the two lenses. It has two 12-megapixel sensors with 1.4-micron pixels, with one featuring a Sony IMX363 sensor, f/1.8 aperture, wide-angle lens and four-axis OIS, while the other features an f/2.4 aperture and a telephoto lens with optical zoom. The Mi MIX 2S has a 5-megapixel front camera with HDR features and Face Unlock capabilities. Xiaomi is also touting AI-based beautification features.