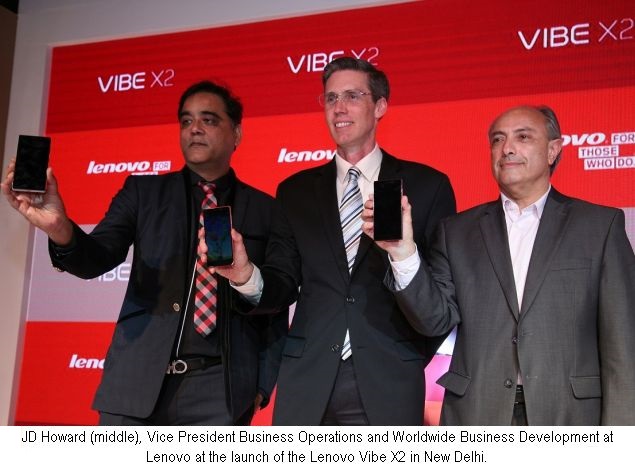 While Lenovo is facing stiff competition from Xiaomi in its home turf in China, the company recently completed acquisition of Motorola, a move which is bound to give it more breathing space in the race. For now at least, the two brands will continue to operate independently, JD Howard, Vice President Business Operations and Worldwide Business Development at Lenovo.

Howard, who is normally based in Singapore, visited Delhi for the launch of the Lenovo Vibe X 2 (first impressions) and while here, he talked to NDTV Gadgets about the advantages that Motorola brings to Lenovo and reiterated that in markets like India where Motorola phones have been very well received lately, we should expect the brand to continue in the market. He also reiterated that Motorola will continue to remain active in India, and any success of the Nexus 6 in India will help Lenovo as well.

"It's very clear that there are places around the world where - for instance in North America - we're going to continue with the Motorola brand," said Howard. "In the case of China for instance, we actually think that Motorola brand has big value. That comes from the experience in India, where Motorola has done very successfully."

The company will follow a pragmatic approach, and going forward it would pay attention to the market strengths of both Motorola and Lenovo, Howard re-stated. The two companies have complementary strengths and weaknesses, with Lenovo having a strong position in China, while Motorola has strength in America, he said.

"We realised that there was some latent affection, some strength in the Motorola brand, and we think it's going to be the same in China," said Howard. "We're going to be very situational and very pragmatic, and we will go with the brand where it makes sense."

For Lenovo, one of the advantages that it has gained from the Motorola acquisition is a large number of patents - something that Lenovo says is essential for being active in the US.

"To do business there you have to have IP," said Howard. "The smartphone market is a very litigious area and you really have to have a very strong IP position. Lenovo, in the recent months, we've done quite a bit to purchase patents from others to strengthen our patent portfolio. When we bought Motorola we also purchased lots of patents which gave us a really strong position."

"It's too early to comment, we're only one week into the integration, so specific strategies at the tactical level is just not my place to comment, because we're not there yet," said Howard, "There's a process we'll go through that will work out these issues. And again, I'll stress the word, pragmatic. What I think bodes well for the combined entity is that both companies have a similar culture. Both place a high premium on innovation and on customer impact."

Also, while the acquisition is still too new for Howard to give specific details about how the business will function, he stressed that company decisions will be driven by pragmatism. He repeated that "Motorola has done very well for itself in India, and as was announced, Motorola will continue under the leadership of Rick Osterloh and the team that's running the business."

For now, he sees the Google Nexus 6 as a good addition to the line-up for India and other markets too, and repeated that any gains for Motorola are gains for the combined entity. Speaking specifically on the Nexus 6, he saw a lot of potential for the device based on the positive response that Motorola devices have had in India.

"What you'll see is, in the case of the Nexus 6, it's a price point that we [Lenovo] don't tough," he said. "And it's a very competitive, very sexy product, so I think it'll do well here."