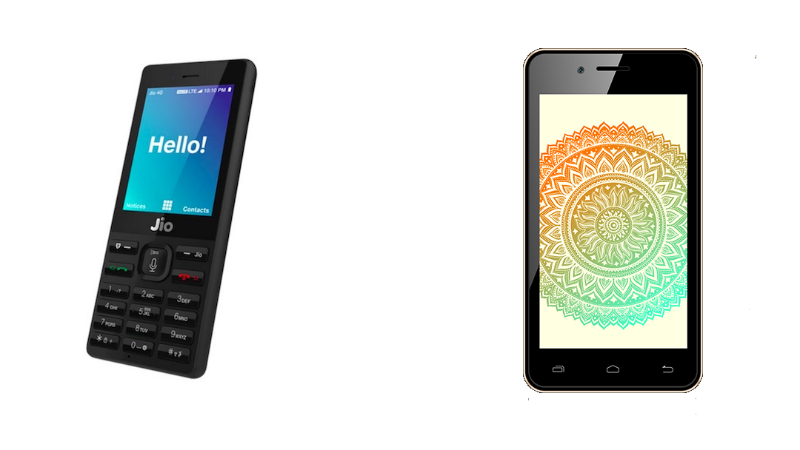 Jio Phone has since its launch become a talking point for both the mobile phone manufacturers and telecom operators as it is expected to bring in more customers for Reliance Jio and arrest the migration from feature phones to smartphones. Now, Airtel has fired the first salvo in Jio Phone’s direction by partnering with budget smartphone maker Karbonn to offer a handset that offers the full Android experience at Rs. 1,399 (effective price). In contrast, the Jio Phone is a 4G VoLTE-capable phone that offers the Web browsing experience but does not have a touchscreen any many other features usually associated with a smartphone. We take a look at the differences between the Airtel Rs. 1,399 Karbonn A40 Indian and the Reliance 4G feature phone, and how much you would end up paying if you buy them.

Upfront costs
Buyers who opt for the Jio Phone will have to pay Rs. 500 to book the handset and another Rs. 1,000 at the time of delivery, totalling Rs. 1,500 upfront costs. For the Airtel offer, they will have to shell out Rs. 2,899.

Minimum recharges required
Both companies require that customers make minimum monthly recharges in order to get the refunds that bring down their effective prices. For Jio, the customer must buy recharges worth Rs. 1,500 per year, bringing the minimum expenditure to the buyer to Rs. 4,500 during the 3-year ownership period. If this condition is satisfied, the customer will get back the Rs. 1,500 deposit that they paid while purchasing the Jio Phone unit.

However, it should be pointed out that Jio is offering two plans for its 4G feature phone – Rs. 153 and Rs. 309. The former provides 500MB data per day, access to Jio apps, and free calls and SMSes – and monthly recharges of the plan over 3 years amount to Rs. 5,508. The Rs. 309 plan provides 1GB data and the other services of the cheaper plan, and also lets customers connect the phone with their TVs to watch JioTV, JioCinema, and other video content on their phone on the big screen. Choosing this plan over 3 years will cost the user a total of Rs. 11,124, plus the cost of the cable (which is yet to be announced). Internet speed beyond the high-speed FUP will be curtailed to 128kbps, but will be available free.

Airtel requires the customers to purchase recharges of Rs. 169 per month to be eligible for the refund – Rs. 500 will be refunded at the end of 18 months of buying the phone, and another Rs. 1,000 at the end of 36 months. The Rs. 169 Airtel recharges over three years would amount to Rs. 6.084. Beyond the 500MB data per day as part of the Rs. 169 recharge, the data will be chargeable. Alternatively, customers can choose to spend make recharges worth at least Rs. 6,000 for the three-year period to become eligible for the refund, with one recharge a month mandatory. In this case, the recharges must be made in two tranches – Rs. 3,000 for the first 18 months and another Rs. 3,000 for the next 18 months.

Features
Jio Phone is a 4G VoLTE-enabled feature phone that has a 2.4-inch display with 320x240 pixel resolution, dual-core 1.2GHz Spreadtrum SPRD 9820A/QC9805 processor, 512MB RAM, 4GB inbuilt storage with expansion support (up to 128GB), 2-megapixel rear camera, and VGA front camera. It has a 2000mAh battery (Jio claims talk time of 12 hours), NFC for digital payments (software support to be added later), Bluetooth 4.1, 4G VoLTE, Wi-Fi, and USB 2.0 support. While there isn’t a touchscreen, you will have to use a 4-way button to navigate the UI. There’s also a flashlight, FM radio, headphone jack, Microsoft Exchange email support, and contacts syncing via Google accounts.

As for the software, the Jio Phone comes with a custom software called KAI OS. This operating system supports the company’s HelloJio voice recognition system that supports 22 Indian languages, as well as proprietary apps such as MyJio, JioTV, JioCinema, JioMusic, JioVideoCall, JioShare, JioGames, etc. However, WhatsApp does not work on Jio Phone at the moment, though support may be added later on; there is no Wi-Fi hotspot either to share the data with other users. Buyers will get access to YouTube and Facebook on the phone.

Karbonn A40 Indian that Airtel will be selling with its plan is a full-fledged Android smartphone. It has a 4-inch display with 480x800 pixels resolution, Android 7.0 Nougat operating system, and a 1.3GHz processor. The handset has 1GB of RAM, 8GB inbuilt storage, microSD card expansion (up to 32GB), 1400mAh battery, 2-megapixel cameras on the front and back, and the standard connectivity features such as Wi-Fi, Bluetooth, Micro-USB with OTG support, FM radio etc. As for the apps, users will be able to download any app available on the Google Play marketplace.

The two phones are starkly different, but target the same segment – first time Internet users. While the Jio handset offers high-speed Web access on a device many users will be familiar with owing to the feature phones they previously used, the Airtel offer provides them the full Android user experience. Of course, the effective price is skewed more towards the latter, but the user experience would be much different. Let us know in the comments below which one you would go for.