iPhone X, iPhone 8, iPhone 8 Plus, Apple Watch Series 3, and Everything Else Announced at September 12 Event

The crowd at Apple's new "spaceship" headquarters saw new smartphones - including a premium version priced at $999 (priced at Rs. 89,000 in India) - as the company commemorated its 10th anniversary of the iPhone.

Apple opened the event asking the audience to cover their screens as an audio clip of Steve Jobs played. Tim Cook, Apple's chief executive, said that it was fitting that Jobs opened the theater - named after him - where the event is taking place.

"His greatest expression of his appreciation for humanity would not be a singular product, but rather it would be Apple itself," he said.

The bar is very high for Apple. Most of its revenue is generated through the smartphone. Cook promised that the company's new phones would make a splash by defining the future of the smartphone.

About midway through Apple's event, Apple's head of marketing Phil Schiller showed off the upgrades to the main iPhone line. Clad in an aluminium and glass skin that comes in Silver, Space Gray, and Gold, the new devices are speedier with sharper screens and better battery efficiency. The phones will also accommodate wireless charging. Schiller said chargers will be made by third-party vendors and appear at partner coffee shops and retail stores, as well as some new cars.

The new smartphones have revamped cameras that will use a feature called "portrait lighting" that will automatically optimise the lighting in your photos. The cameras also have substantially improved slo-mo video recording.

Schiller took some time to tout the smartphones' ability to do more in augmented reality -- which is expected to be a key area of growth for video games and other software apps. An app from Major League Baseball, for example, will display live stats over players when users look at the field through their iPhone screens.

Apple is bumping up the base storage of an iPhone 8 to 64GB at a price of $699. The larger iPhone 8 Plus will start at $799. Both will be available for order on September 15 and ship on September 22.

After the iPhone 8 presentation, Cook retook the stage to offer, in Jobs's iconic words, "one more thing" - the iPhone X.

The phone, he said, was the "biggest leap since the original iPhone." (The company is pronouncing it the iPhone ten).

The iPhone X will start at $999 - considerably more than the base price of previous models. It will be available for pre-order on October 27, and ship on November 3.

The iPhone X has an advanced array of cameras for facial recognition, which allows the phone to become unlocked just by looking at it. The cameras can learn a user's face and note gradual changes. And it can be used at night or day. 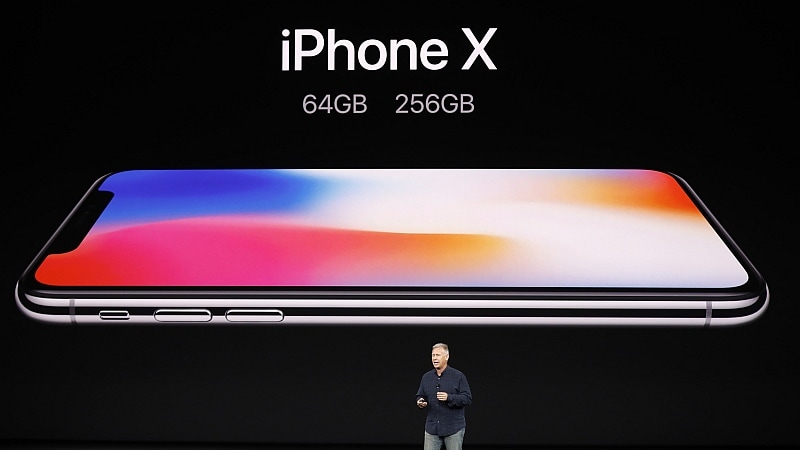 But Apple promised that it would not collect the data on all of those faces. The information would only be kept on the smartphone, not sent to Apple servers.

The facial recognition technology has other applications as well. Apple introduced "animoji" - animated emoji that imitates your facial movements and lets you record animated messages through texts.

The new high-end smartphone has a 5.8 inch display that covers the entire surface of the phone. Unlike its cheaper sibling, the iPhone 10 comes in space grey and silver and sports a "super" retina display, which Schiller said was much sharper than any other iPhone because it uses OLED display technology.

Notably, there also is no home button. Users must swipe and use gestures to close an app. Calling up Siri can now be done with a new side button.

The iPhone X boasts updated cameras as well, with the same features of the iPhone 8 and iPhone 8 Plus, as well as the capability to take better selfies. Battery life is two hours longer than the iPhone 7.

Like the new iPhone 8, the iPhone X can be charged wirelessly. Apple said next year, it will release a charger pad that can simultaneously recharge the iPhone 8, its new Apple Watch Series 3 and a new version of its earphones, called the AirPods.

The first product up for discussion was the Apple Watch. The new smartwatch - called the Apple Watch Series 3 - will have its own cellular connectivity, said Apple's chief operating officer, Jeff Williams, who is also in charge of Apple's Watch division. The Watch will be able to receive calls -- using your iPhone's number - and can support apps including Maps and WeChat. The new Apple Watch will also be compatible with Apple Music, meaning you can use it as a music player on its own.

Williams said the new watch can play up to 40 million songs using Apple Music. Siri also gets a boost on the watch. Conversations with Apple's artificial intelligence can happen without even lifting an arm.

Apple is making a big push to create its own shows and shore up its position in the living room. The Apple set-top box, Apple TV, is now going to support 4K HDR video the company said. The company is also adding live news and live sports sections to the Apple TV app.

The box itself is getting faster processors. The company showed how it could connect eight people online and have them play a video game together.

Versions of films and shows filmed in 4K will cost the same as HD videos on Apple's iTunes store. The new Apple TV 4K will go on sale September 15 and ship September 22. It will cost $179 (starts from Rs. 15,900 in India). While 4K adoption has been slow to get started, analysts say it's beginning to reach a tipping point.