iOS 13: The 13 Biggest New Features Coming to Your iPhone This Year

iOS 13 is finally getting some much-awaited features like dark mode, new Reminders app, and so much more.

Apple WWDC 2019: iOS 13 was announced on Monday. Here are its top features.

Apple announced iOS 13 at its WWDC 2019 keynote address, offering users and developers a first look at what's coming to the company's most significant operating system right now. As expected, iOS 13 comes with a number of notable new features that improve performance and bring a bunch of updates to the built-in apps. From the much-anticipated system-wide dark mode to being able to connect external storage with an iOS device, the next edition of the company's mobile operating system looks like quite an upgrade for both developers and users. Apple's iOS 13 will ship later this year while the public beta builds will be available later this month. iOS 13 is compatible with iPhone models starting with iPhone 6S and above. A developer preview build of iOS 13 is already available with a public beta coming later this month.

iOS 13 comes with a large number of new features. We've picked out 13 of the best new user-facing features in iOS 13.

1. Dark mode
iOS 13 is finally getting a system-wide dark mode. It's probably the biggest change in terms of user interface you'll see in iOS 13. Apple showed off its own apps supporting dark mode at the WWDC 2019 keynote. The dark colour scheme is easier on the eyes and seems like a great way to use your iPhone, especially in low-light conditions. Dark mode can be turned on manually via the Control Center. Users can also schedule dark mode to turn on at sunset and then automatically turn off at sunrise.

Dark mode is integrated system-wide. It'll be visible in apps as well as system-level views. Third-party app developers will be able to integrate the new dark mode in their apps so you can expect a lot of popular apps supporting it as well.

iOS 13 will also ship with new wallpapers that are optimised for dark mode.

2. Performance boost
What's an update without a boost in performance? At WWDC 2019, Apple announced that iOS 13 is getting a major performance boost. The Cupertino-based company says apps in iOS 13 will launch up to twice as fast as iOS 12.

3. New editing tools and more in Photos app
Apple is bringing a number of new editing features to iOS 13. These ship with a new editing interface which will work for both photos as well as videos. This is the first time iOS will let users edit videos as well. The new editing tools include brilliance, shadows, highlights, contrast, white balance, definition, noise reduction, and others. Users will be able to rotate their videos on iOS 13.

The Photos app is also getting a bunch of neat updates. From a whole new user interface to machine learning-powered simplified browsing experience for all your photos and videos, the update aims to reduce clutter within the Photos app. 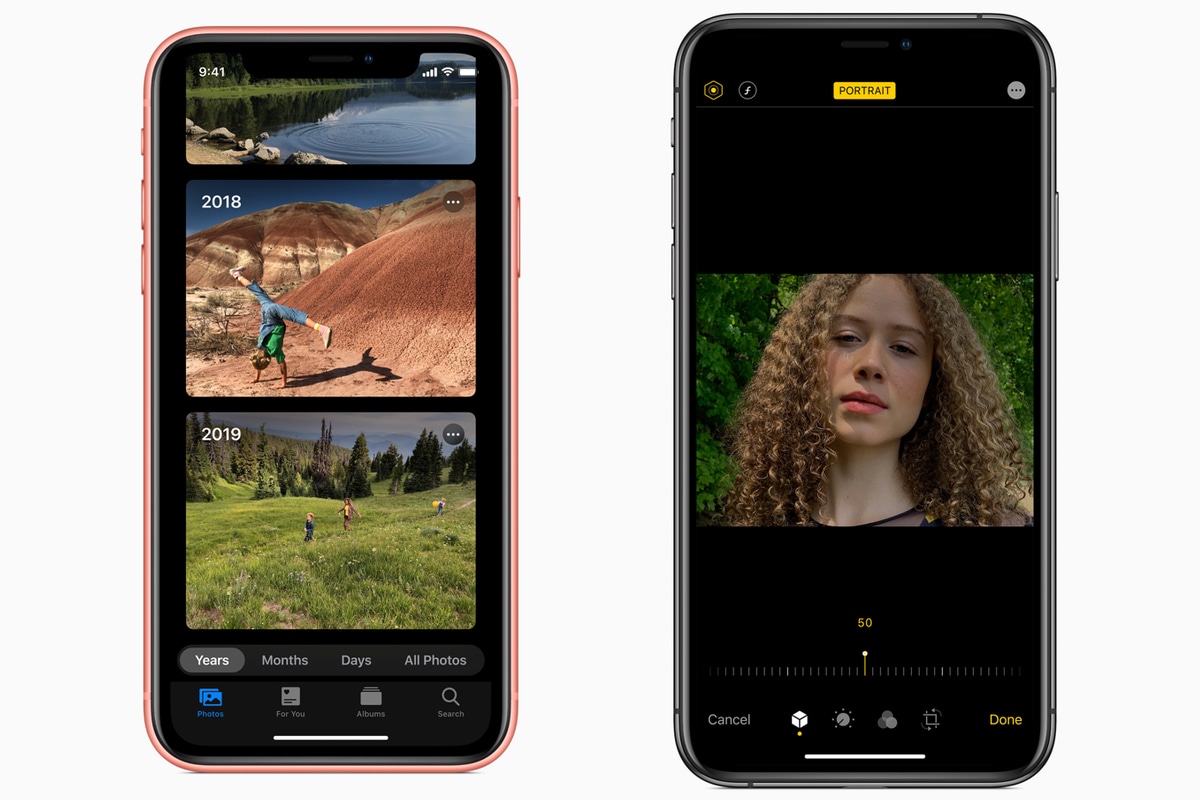 Photos app on iOS 13 will use machine learning to get rid of all the clutter
Photo Credit: Apple

The Camera app will now let users adjust the position and intensity of the studio lighting while shooting photos in portrait mode. The new Camera app on iOS 13 comes with a new portrait lighting effect called High Key Mono which helps create a monochromatic look on a white background.

4. New privacy features
Privacy has always been on Apple's agenda when it comes to building products. With iOS 13, Apple is bringing a new feature for enabling seamless and secure authentication. The new 'Sign in with Apple' feature will let users log in to apps and websites using their Apple account directly.

Developers will be able to add 'Sign in with Apple' support to their apps and websites. The feature will allow users to sign in using Face ID or create new accounts without passing on any personal information. Apple will automatically create a new, personal email address for each app that users sign in to. This will prevent apps and websites from getting your personal email address.

5. New app to find missing devices and track loved ones
Apple's Find My Friends and Find my iPhone apps are becoming a single app under Find My. The new app will let users track their Apple devices as well as friends and family using a single user interface. Find My can also help you locate devices that are offline. Devices, when offline, can send a secure Bluetooth beacon to nearby iOS devices which is then relayed to the iCloud, and then it is passed on to you.

6. Revamped Reminders app
iOS 13 will include a brand new Reminders app. The new app will add a number of filtering options such as Today, Scheduled, Flagged, and All apart from a new user interface. While setting up new reminders, the app will automatically suggest the time at which you would want to be reminded. You can also tag contacts within reminders so when you're in a conversation with the person on the Messages app, you'll be reminded. 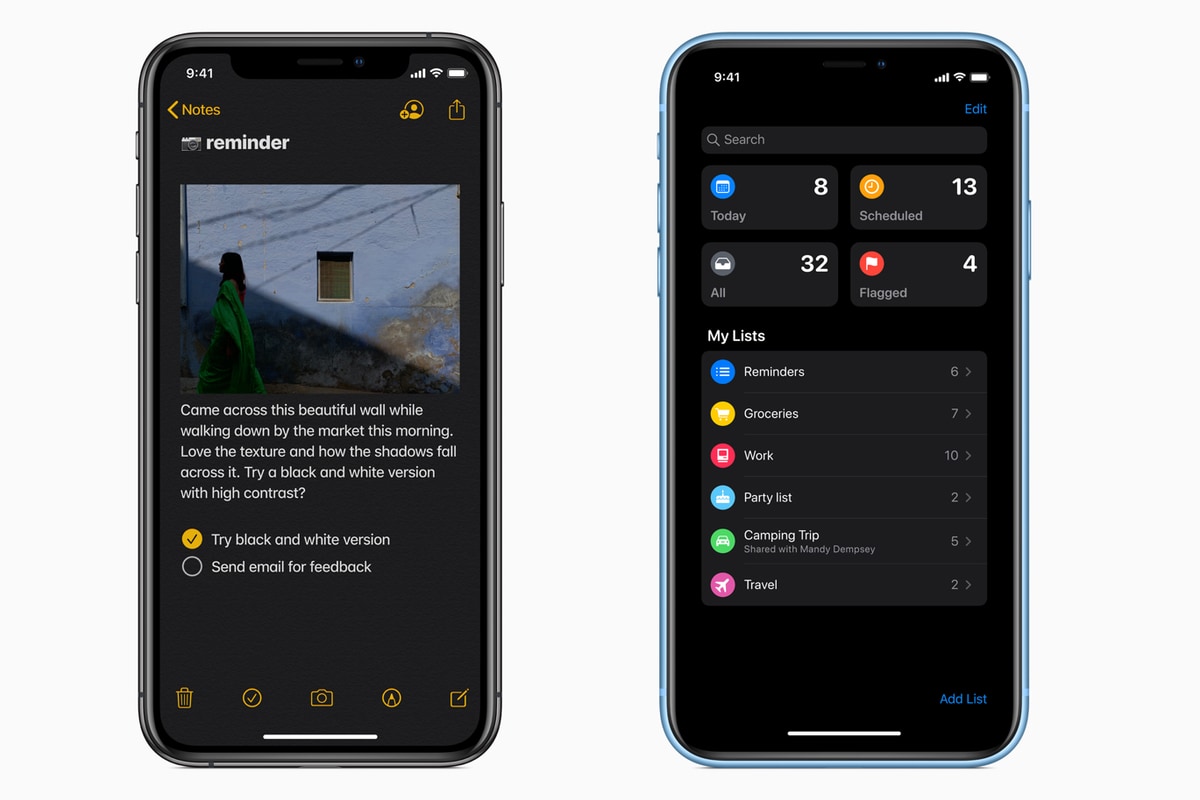 iOS 13 comes with a brand new Reminders app while the Notes app has been refreshed as well
Photo Credit: Apple

7. Quick Path keyboard
iOS 13's keyboard is getting a new swiping function. This is quite similar to the functionality we've seen on third-party keyboard apps such as SwiftKey and Gboard. Apple is now bringing it to the built-in keyboard on iOS. The new keyboard is called 'Quick Path' keyboard in iOS 13. The feature allows users to simply swipe across the keyboard to type words.

8. Maps app gets more refined data and new features
Maps app has also been rebuilt from the ground up. The new Maps app on iOS 13 includes much more detailed maps and realistic details. Apple is also introducing a new feature called Look Around in the Maps app that offers a 3D experience while checking out a place, much like Google's Street View. Maps now let users share their estimated time of arrival with their loved ones. 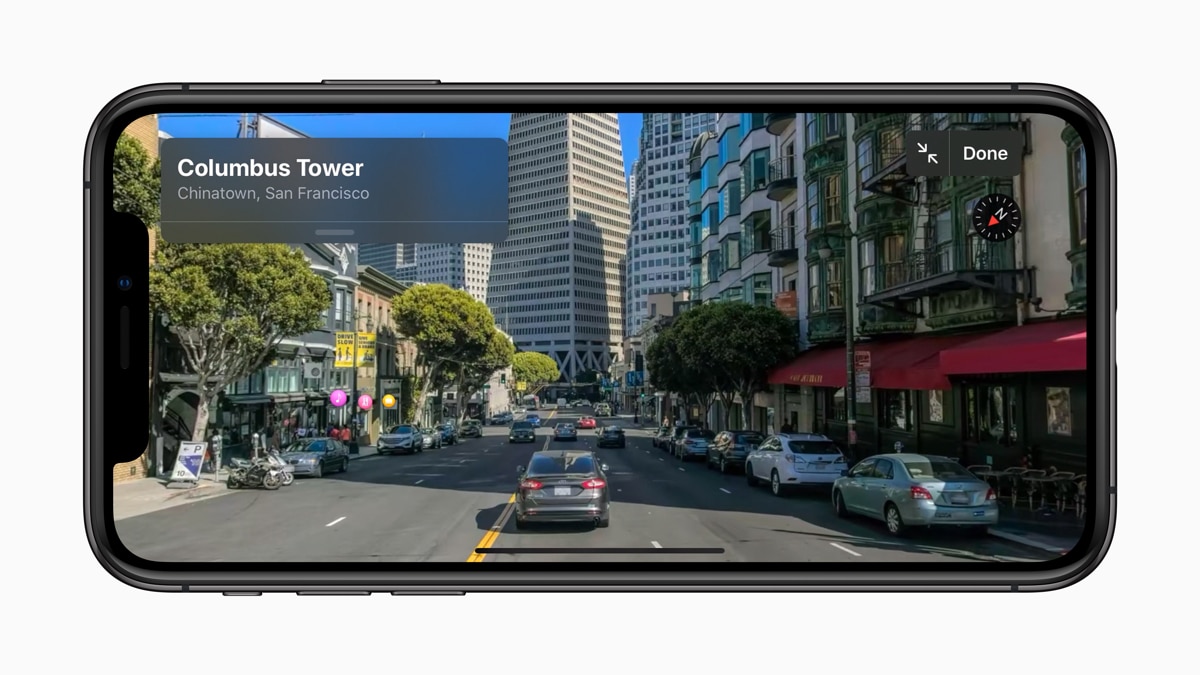 Look Around on the new Maps app on iOS offers a 3D view of a place
Photo Credit: Apple

9. Siri gets a new voice
Siri is getting a whole new voice on iOS 13, thanks to neural TTS. This means Siri will sound less robotic and more natural, especially while speaking longer sentences. The voice is still entirely generated via software. Siri is also getting a new Indian English voice with iOS 13 to offer a more localised touch for iOS 13 users in India.

10. Memoji stickers expansion
iOS 13 will offer more ways to create customised Memoji on compatible iPhone models. Users can pick from 30 new hairstyles, 15 new pieces of headwear, and even more options. iOS 13 is also getting three new Animoji characters — mouse, octopus, and a cow. For every Memoji and Animoji character you create on your device, iOS 13 will automatically create sticker packs which can be used in Messages.

11. Health app brings new useful features
Health app on iOS 13 is also getting a number of new useful features. Apple is bringing cycle tracking in the new health app to let users track their menstrual cycle. The app will be able to predict when your period is likely to begin and end for the next three cycles.

The refreshed app is getting a new summary view which includes all the information you need the most including alerts, recent entries, highlights, and others. The Health app will also display audio levels from the headphones you use and let you know if they're fine or too loud.

12. Safari gets better
Safari in iOS 13 is getting a download manager that lets users check the status of a file they're downloading apart from accessing all the downloaded files. Safari will now come with an updated start page design. This will include favourites, frequently visited websites, and the websites you've recently viewed. The Web browser will also let you resize photos while uploading them to a website.

13. Files app is a lot more useful now
The Files app is also getting a significant update in iOS 13. Probably the biggest feature to talk about here is the support for an external USB drive, SD cards, and hard drives. You can now simply plug in an external device transfer data to your iOS device. iOS 13 will also let users share folders from their iCloud Drive. Files app now supports SMB file servers which means you can connect your office systems or a home PC with the Files app.

Further reading: WWDC, WWDC 2019, iOS 13, iOS 13 Features, IPhone
Harpreet Singh Email Harpreet
Harpreet is the community manager at Gadgets 360. He loves all things tech, and can be found hunting for good deals when he is not shopping online. He has written about deals and e-commerce in India for many years, as well as covering social media and breaking technology news. More
macOS 10.15 Catalina With New Apple Music App, Sidecar, Voice Control, and More Features Announced at WWDC
Blaupunkt BH-21 Bluetooth Headphones With 24-Hour Battery Life, Turbo Bass Mode Launched in India at Rs. 2,999