iOS 11: Our Favourite Augmented Reality Apps and Games That Showcase the Power of ARKit

Augmented Reality (AR) is one of Apple’s big bets for the future. In case you don’t know what AR is, it's a way to bridge real world objects and virtual ones, with a little help from your phone’s camera. For example, you point your camera at an object, and an AR app will help you measure its dimensions. You point the camera at the sky, and an astronomy app will show you the stars, and so on. The most famous AR app that most people would know about is Pokemon Go, but the AR aspect of that was incredibly limited in comparison to what's possible by now.

ARKit Could Be iOS 11’s Killer Feature: What You Need to Know

Apple has made it easy for developers to create AR apps with the launch of ARKit on iOS 11. That, coupled with the specially calibrated cameras for AR on the iPhone 8, iPhone 8 Plus, and iPhone X mean that the technology will get a big boost. We’re not sure if this is going to go mainstream in the future but what we do know is that there are a bunch of fun AR apps on the App Store and you can download them right now if you have iOS 11.

Will AR apps work on my iPhone or iPad?

ARKit apps will work on the following iOS devices:

Here are some of our favourite AR apps for iOS 11.

Sky Guide
Astronomy apps can truly leverage the power of AR. Apps such as Star Walk 2 (Rs. 250) and Night Sky (Free) do this by letting you point the phone’s camera at the sky to reveal celestial bodies and their current positions. However, we like Sky Guide’s implementation the best. It detects objects between you and the sky, and only labels stars and constellations in the sky. This is so much better than seeing stars and constellations showing up on buildings, your table, and other objects.

AR Measurekit
Another neat area for AR to step in is measuring things. If you don’t have a measuring tape, you could use these apps, though these might not be as accurate as a physical measuring tape. AR Measurekit lets you measure the distance between two points for free, and you can pay to measure angles, a person’s height, visualise how big an object is, and more. You can also check out ARuler. 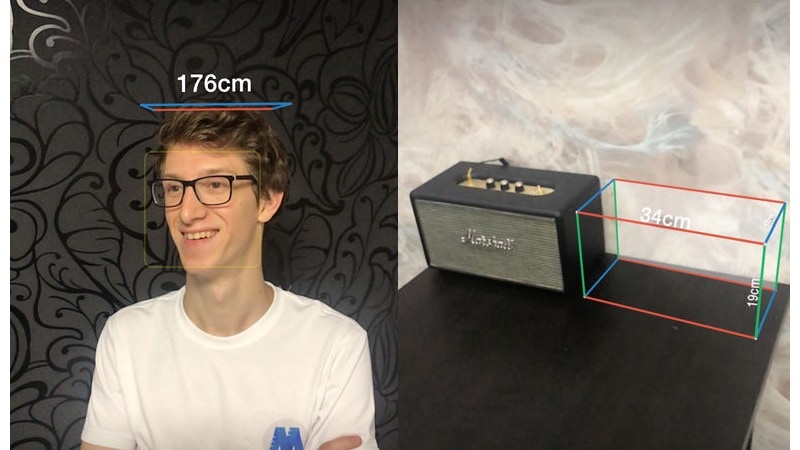 Fitness AR
Fitness AR lets you explore your running and cycling routes while sitting at home. You point your camera on a table or any other surface and the route will show up there. You can zoom in, pan, and follow the entire route to prepare for your workouts. The app lets you connect your Strava account so all of your routes are available in it.

Housecraft
Housecraft lets you place furniture inside your home, to see if commonly purchased objects such as chairs, sofas, and so on would fit in the rooms there. The app first will ask you to scan the floor of your room so it can estimate dimensions, and then you can place objects and see if they fit. You can also try out Magicplan (free with in-app purchases), which lets you create a floor plan for your home, or Houzz (Free), which offers suggestions on how to spruce up your home via AR. Carrot Weather
Carrot Weather is a weather app with a snarky personality. The app’s best feature is a robot that throws a constant stream of snark while telling you about the weather. Now this app has an AR mode where the bot will appear on any surface and show weather data while talking to you with its trademark snark.

These five apps stood out for us, but we also checked out a host of other apps that offer AR experiences. Here’s a quick list of other ARKit apps worth checking out:

Which are your favourite AR apps on iOS 11? Let us know via the comments.

We discussed iOS 11 and the future of iPhone and iPad in-depth on our weekly technology podcast - Orbital. You can subscribe to it via Apple Podcasts or RSS or hit the play button below.

Further reading: AR, Augmented Reaility, iOS, iOS 11, Apple, iPhone, iPad
Pranay Parab Email Pranay Pranay is in charge of podcasts and videos at Gadgets 360. Over the years, he has written over 500 tutorials on iPhone, Android, Windows, and Mac. He has also written in-depth reported features on the intersection of technology and culture, reviewed fitness wearables, been the social media manager, started two podcasts, and produced several tech videos. He loves travelling, particularly to places not frequented by tourists. He keeps running half-marathons across the country and hopes to complete ...More
iOS 11's Control Centre Does Not Turn Off Wi-Fi, Bluetooth Completely but Apple Says It's Not a Bug
Redmi Note 4 Discounts and Other Xiaomi Product Offers on Flipkart, Amazon

iOS 11: Our Favourite Augmented Reality Apps and Games That Showcase the Power of ARKit
Comment