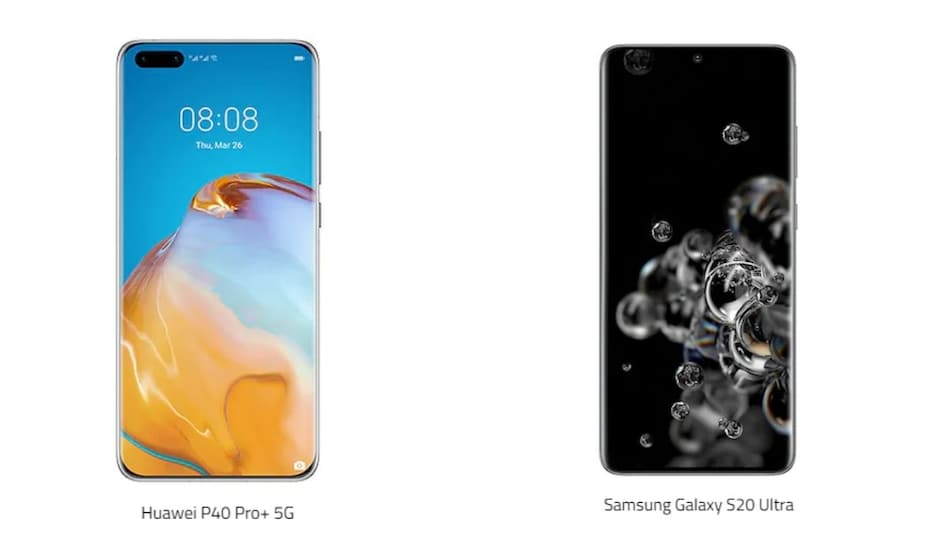 Huawei P40 Pro+ on Thursday made its debut as a part of the Huawei P40 series and the company repeatedly stressed on the phone's "visionary photography" abilities. Once the smartphone arrives in the stores, it will go head to head with flagships such as the Samsung Galaxy S20 Ultra. Both the Huawei P40 Pro+ and Samsung Galaxy S20 Ultra come with premium features, especially in terms of the camera performance. If case you are wondering how the two phones stack up against each other, at least on paper, we have made your job slightly easier.

Here's a quick comparison between the Huawei P40 Pro+ and Samsung Galaxy S20 Ultra smartphones in terms of their price and specifications.

The Huawei P40 Pro+ that was launched on Thursday comes in a single 8GB + 512GB unit and will be available in Black Ceramic and White Ceramic colour options. The smartphone is priced at EUR 999 (roughly Rs. 82,900).

Meanwhile, the Galaxy S20 Ultra was globally launched in February and arrived in India in March. The smartphone comes in Cosmic Black and Cosmic Grey colour options and packs 12GB of RAM and 128GB of inbuilt storage. There are two more storage options - 256GB and 512GB. In India, the Galaxy S20 Ultra is priced at Rs. 92,999 for the 128GB model.

Both the smartphones offer dual-SIM support, however, the memory storage on P40 Pro+ cannot be expanded. The Galaxy S20 Ultra inbuilt storage that can be expanded via microSD card (up to 1TB).

In terms of the processor, Huawei P40 Pro+ 5G is powered by the octa-core HiSilicon Kirin 990 SoC that supports 5G. The phone runs on Android 10 with EMUI 10.1 on top, however, with no Google services on the smartphone. Google in 2019 was barred by the US authorities from doing business with Huawei. Meanwhile, the Galaxy S20 Ultra is powered by a 7nm octa-core processor but the manufacturer of the processors varies according to the region. The phone is either packed with Exynos 990 SoC or Qualcomm Snapdragon 865 SoC.

Coming to the cameras, the Galaxy S20 Ultra has a quad rear camera setup that includes a 108-megapixel primary sensor along with a 48-megapixel telephoto camera and a third 12-megapixel camera. The periscope lens in the setup allows a Super Resolution Zoom' of up to 100x. There is a depth sensor onboard as well.

In contrast, the penta rear camera setup on P40 Pro+ includes a 50-megapixel primary camera, a 40-megapixel ultra-wide-angle shooter, an 8-megapixel SuperZoom periscope lens with 10x optical zoom, and an 8-megapixel telephoto camera. Lastly, there is a 3D depth-sensing camera also included in the setup.

On the front, the Samsung smartphone has a 40-megapixel selfie camera while the Huawei phone comes with a 32-megapixel camera and a time-of-flight sensor. Samsung Galaxy S20 has a bigger 5000mAh battery compared to the 4200mAh on the Huawei P40 Pro+. There's a six grams difference between the two smartphones with Huawei P40 Pro+ being heavier at 226 grams.