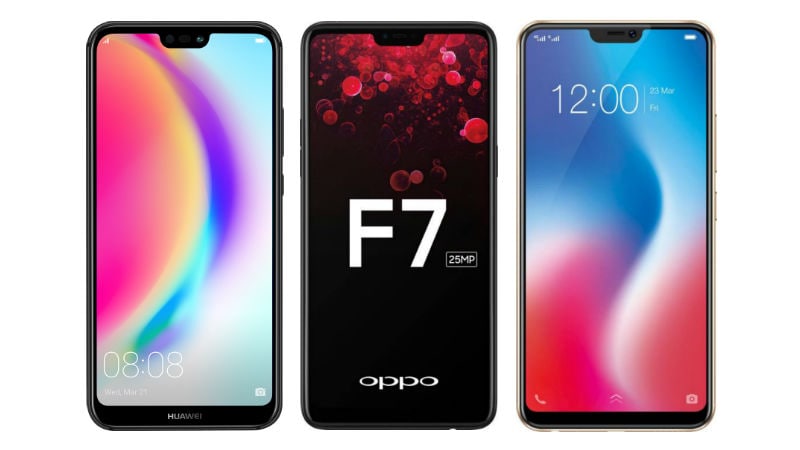 Huawei P20 Lite is one of the two new smartphones that the Chinese mobile maker launched in India on Tuesday. The Huawei P20 Lite is the cheapest model in the company's new P20 series, and is priced in the affordable segment. The key features of the smartphone include AI-powered cameras co-engineered with Leica, dual rear cameras, 5.84-inch FullView display, and Android Oreo out-of-the-box. Moreover, this camera-focused smartphone undercuts the new Vivo V9 and Oppo F7 in terms of price, even as it offers competitive features.

For those unaware, Oppo F7 was launched last month in India as one of the most affordable smartphones with a notch, just days after the Vivo V9 was unveiled in the country featuring a similar design. Both the Huawei P20 Lite rivals also have several other features in common, including a bezel-less design that strikingly resembles the iPhone X, the presence of Android 8.1 Oreo out-of-the-box (with their respective skin on top), and full-HD+ (1080x2280 pixels) resolution displays with 19:9 aspect ratio, among others.

We take a look at the Huawei P20 Lite's price and specifications and compare them with those of the Vivo V9 and Oppo F5 to help you choose the best smartphone.

The Huawei P20 Lite price in India is Rs. 19,999, and it will be available exclusively via Amazon India starting May 3. Some launch offers will be revealed on the day of release. The smartphone will be available in Midnight Black and Klein Blue colour options.

Meanwhile, Vivo V9 price in India is Rs. 22,990 for the 4GB RAM/ 64GB storage configuration. The smartphone went on sale in India earlier this month, across offline partners and is also available via online partners like Amazon India, Flipkart, Paytm, and Vivo's own e-store. The smartphone will come in three colour options - Champagne Gold, Pearl Black, and Sapphire Blue.

Oppo F7, on the other hand, costs Rs. 21,990 in India, for the 4GB RAM/ 64GB storage variant, and is available in Diamond Black, Moonlight Silver, and Solar Red. Another variant of the phone with 6GB RAM and 128GB inbuilt storage was launched at a price of Rs. 26,990, and will be available in Diamond Black and Solar Red colour variants. The Oppo F7 is available for purchase across Flipkart, Amazon.in, Paytm, and all Oppo offline stores.

In terms of optics, the P20 Lite has a dual camera setup at the back with a 16-megapixel primary sensor with an aperture of f/2.2 and a 2-megapixel secondary sensor. On the front, the smartphone has a 24-megapixel sensor with an f/2.0 aperture, with support for AR-based stickers similar to Apple's Animojis and Samsung's AR Emojis.

The Huawei P20 Lite has 64GB of storage built-in, with option to expand it up to 256GB via microSD cards. It also has support for 3D facial recognition with 96 recognition points, as well as facial unlock. Sensors onboard include proximity sensor, ambient light sensor, compass, gravity sensor, gyroscope, and fingerprint sensor on the back. The smartphone is fuelled by a non-removable 3000mAh battery.

In terms of optics, the Vivo V9 has a dual rear camera setup that gets a 16-megapixel primary sensor and a 5-megapixel secondary sensor, which have f/2.0 and f/2.4 aperture lenses respectively. On the front is a 24-megapixel selfie camera with features such as f/2.0 aperture, Face Beauty app, an Ultra-HDR mode, and Portrait Lighting capabilities.

Connectivity options on the Vivo V9 include 4G VoLTE, dual-band Wi-Fi, GPS/ A-GPS, a 3.5mm headphone jack, a Micro-USB port, and Bluetooth 4.2. Sensors onboard the phone include an ambient light sensor, proximity sensor, and an accelerometer. There is a 3260mAh battery powering the internals from under the hood.

The Oppo F7 handset bears a 16-megapixel rear camera features including f/1.8 aperture and AI scene recognition. The selfie camera has a 25-megapixel CMOS sensor with f/2.0 aperture and real-time HDR capabilities. In terms of connectivity, it gets Bluetooth, Wi-Fi, 4G VoLTE, USB OTG, and GPS/ A-GPS. Sensors include an ambient light sensor, accelerometer, fingerprint sensor, and proximity sensor. There is a 3400mAh battery under the hood.