Chinese brand Huawei has been making inroads into India over the years with its sub-brand Honor, and to aid in these efforts, the company opened an R&D centre in Bengaluru in 2015. As with many other companies, the R&D centre focuses on software development, and has made major contributions to Huawei's EMUI Android custom Android ROM.

The company has stated in the past that it aims to be among the top brands in the country. To do this, it's putting a lot of focus on localisation, and it is also working on increasing its manufacturing in India.

In terms of localisation, it's bringing about India-specific features, such as the SoS function that was introduced with the Honor 7, a Huawei spokesperson told Gadgets 360 on a recent visit to the R&D centre in Bengaluru. The R&D campus also includes a lab for testing Huawei's devices, for durability and performance, to bring down the error rates, with data being shared with Huawei R&D facilities worldwide.

EMUI 5.0 - what's it about
Software is what this R&D facility is about, and when we visited, the team offered a detailed look at EMUI 5.0 - Huawei's latest custom Android ROM, based on Android Nougat. The new EMUI focuses on four key things - all new UX, faster performance, security, and smart services.

EMUI 5.0 promises a clean user interface. The UI is built on a blue theme that the company says will provide a pleasing experience. The company also wants to cut down steps when it comes to launching or using an application. It also adds that 90 percent core operations can now be completed in three steps.

The ability to push an incoming call to the background and continue with an app you were working on, cutting down steps to manage notifications, and notifications appearing at the bottom of the screen rather than right in the middle of it, are some of the changes that the new EMUI brings to the table.

Focus on custom software over Android
Some of the features may also look familiar, like the ability to swipe left on mails to quickly delete them, or quick replying to messages from the notification bar. These are features Android users are already familiar with, but are new to EMUI.

One of the biggest of these additions is the app drawer, which EMUI 5.0 now offers. Of course, one must wonder why the company is keen to replicate functionality already available in Android. 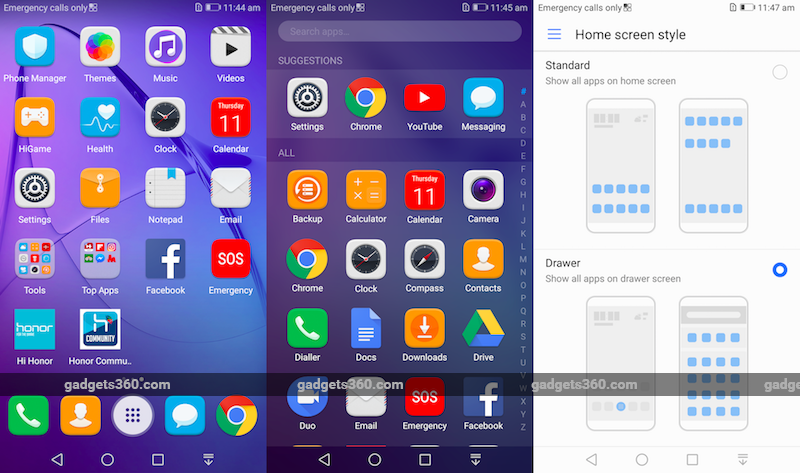 The software team told Gadgets 360 that developing certain features personally allows them to tweak the features, and upgrade as to their liking, and their fans' reaction. Relying on Android's features reduces the customisability, the software team explained. Huawei's software team also claims that by not relying on Android, it was able to bring in some features before anyone else, such as knuckle touch and multifunctional fingerprint sensor.

The latest update to EMUI also brings a feature called HiBoard, which will look familiar for those who've already used services like Flipboard and the like, which brings up top news stories of the day, as well as app suggestions based on the time of the day, and a universal search bar on top.

Gallery is revamped, and it now uses deep learning to identify faces as well as classify photos based on people, places, and things. Meanwhile, another familiar app is the Notepad, where you'll be able to write texts and attach images, categorise them into work, personal or travel and share them via social media. Again, most of the new features aren't exactly new, but Huawei says that it can keep tweaking these to better suit its own customer feedback.

Setting up an R&D in India allows Huawei to tailor-make some EMUI functionalities for its Indian consumers, the company says. This includes features like SoS calling functionality, which is now included in its SoS app. Apart from the default 112 emergency number, you can also add your own personal contact for emergencies who can be notified on pressing a user-defined key.

The new EMUI also adds the ability to run two social accounts including WhatsApp and Facebook at the same time, and support for 14 Indian languages for the complete UI. 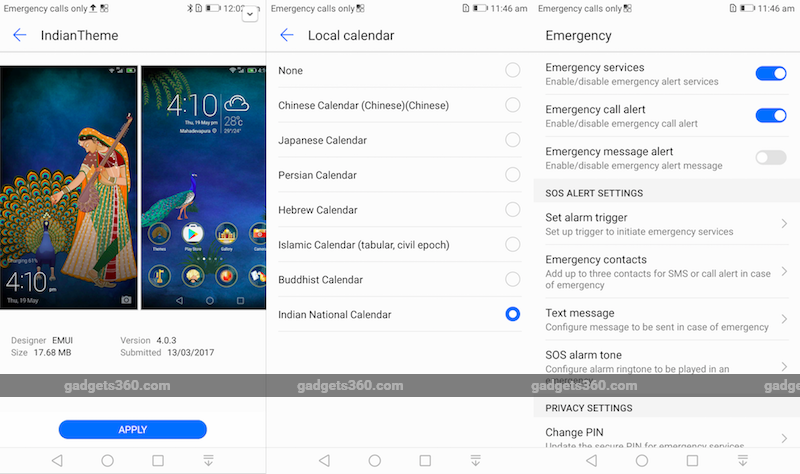 Performance and security
Huawei is also trying to focus on maintaining performance over time, and is using machine learning to provide optimum RAM management. The company claims that its smartphones with the EMUI 5.0 will get faster and smoother over time, as it "allocates resources dynamically to provide more CPU and memory to applications that are used on a regular basis".

Such a process can affect battery efficiency, but Huawei says the EMUI 5.0 is also over 7 percent more battery efficient than the previous UI. In an idle state, the phone also cleans up some memory so that it doesn't slow down over time, Huawei claims.

With EMUI 5.0 you get a new PrivateSpace feature that helps keep files and important apps safe by creating an independent encrypted personal space, which can be access only through your fingerprint. EMUI now also scans messages to find malicious links, phishing scams.

All these changes are part of a larger philosophical shift to capture the market, a Huawei spokesperson told Gadgets 360. The India-centric features, and localisation, both help achieve the company's goal to cater its UI to consumers in the country, it believes.

The EMUI 5.0 will roll out to the Honor 8, Honor 6X, Honor 5C, and Huawei P9 this month, as well as the Honor 8 Lite which was launched on Thursday. At that point, we'll see how the EMUI 5.0 really performs once we get a feel of it on these smartphones.

Disclosure: Huawei sponsored the correspondent's flights for the trip to Bengaluru.