Share on Facebook Tweet Snapchat Share Reddit Email Comment
Few handsets have seen the kind of speculation that preceded the launch of Nokia's first Android smartphone. But a lot of people were let down to learn that the phone runs a highly customised version of Android, making way for Microsoft's services such as Bing search, OneDrive (earlier called SkyDrive), Outlook.com and Skype among others, instead of the Google Play store and Google services.

The Nokia X is based on the Android Open Source Project (AOSP), and is powered by Microsoft and Nokia services. Nokia has used the AOSP version corresponding to Android 4.1 Jelly Bean as the baseline for its operating system. The highlight of the Nokia X is the highly customised version of Android, with Metro-inspired UI and access to Nokia's own app store. While there's no access to Google's Play Store, Nokia is offering side-loading of Android apps from any third-party source: 1mobile market, SlideME market, Aptoide, and Yandex Store.

However, it is possible to install the Google Play store on the Nokia X through rooting. This means giving the user root permission on the phone. By rooting a device you can run apps that require access to certain system settings, and the ability to flash custom ROMs to the phone, which can actually add extra features. Before starting, note that unlocking the bootloader or rooting process voids the warranty of your device. And more importantly, the rooting process might brick the device if you make any mistakes, so be careful when following these steps.

(Also see: How to install WhatsApp and other apps on Nokia X from 'unofficial' sources)

In order to run Google apps, you will be required to root your Nokia X with the following steps- 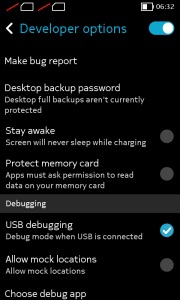 -Users will be required to enable USB debugging on the Nokia X that can be found in Settings' Developer option. You will have to tick the USB debugging box to successfully perform the rooting process.

To start, you will have to enable USB debugging. To do this, first go to your phone's Settings > Developer and tick the USB debugging box.

-Next users have to download the Farmaroot.apk to the Nokia X or to a Windows PC (transfer it to the Nokia X). Use the automatic setup to install the root tool on the Nokia X phone.

To start, go to the Farmaroot.apk folder in your Nokia X > Click the .APK file and it will start the automatic installation of the app on to the phone, follow the instructions.

(If a file is transferred from PC to the Nokia X, users can search for the required file on the phone via the ASTRO File Manager, which comes pre-installed on the device.) 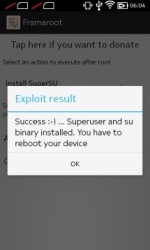 Once, the Farmaroot has installed on your Nokia X, choose the app icon in app drawer to install SuperSU. To install, open the SuperSU file and choose the Gandalf exploit, which is a dropdown option in the Farmaroot app.

When the installation is complete, there will be a success pop-up message on the screen. Now you just need to reboot your Nokia X for successful completion of the rooting process.

- The Farmaroot app on the Nokia X also gives an option to unroot the device, if you want to bring it back to normal.

Installing the Google Play store on the Nokia X:

-Download the Google services APKs from here on your Nokia X or a Windows PC and copy the APKs to the phone using a USB cable.

To start, go to this link install the Google services APKs to your phone or Windows PC. Transfer all the Google APKs to Nokia X using a USB cable.

-Now, you will be required to extract all the Google APKs. To do this, first download a root explorer app on your Nokia X, which is a file manager for root users. 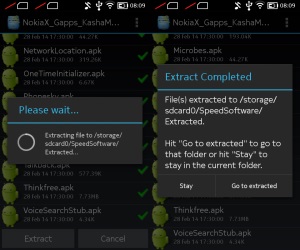 Go to the folder where you saved the Google APKs and select all the files; next from the menu choose the option Extract all. The extracted APK files will be automatically stored on to microSD card's SpeedSoftware folder. At this stage, do not install the APKs.

-The extracted files then must be moved on to /system/apps folder of the Nokia X. (Use the root explorer app, and go to the SpeedSoftware folder on the microSD card. Select the files, and from the menu, choose Cut. Then, go to the /system/apps/ folder, and choose Paste from the menu.)

-Next, you will have to change the permission of all the extracted files in the /system/apps folder by selecting all the files that were extracted (Google APKs) and opening the Permission option in the menu for the all the apps. The Owner, Group and Other options should have Read Only checked in the popup that comes when you press Permission. Only Owner should have the Write option checked. Reboot your Nokia X once the permission has been changed for all the extracted Google APK files to make the device more stable. 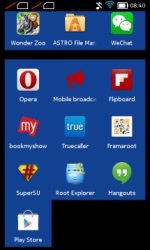 -Now you will find the Google app icons for Hangouts, Gmail, and Google Play Store among others in the app drawer.

This method works with the earlier version of the Nokia X software, but once you move to version 11.1.1, new security features don't permit this technique. There's a new method that can help if you've updated your phone though.

In case the above method does not work because of new security restrictions, here's what you can do:

-Install the Nokia composite ADB interface on your Windows PC, in addition to installing the Framaroot.apk on your Nokia X (following the steps detailed above). 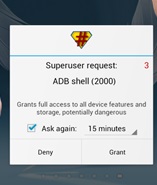 The Nokia composite ADB interface folder installed on your PC should have two sub folders for KingoRoot_NokiaX_Mod and Nokia X USB drivers.

-Plug your Nokia X to the Windows PC with a USB cable, open the device manager and right click on the connected device. This gives the Update Driver option on your Windows PC, to install the ADB drivers.

You might be prompted to enter new drivers for your Nokia X, which can be found the Nokia composite ADB interface folder - Nokia X USB drivers. Just choose browse, go to the folder and select the driver.

-Now you need to open the KingoRoot.exe file on your Windows PC, which can be found in the Nokia composite ADB interface folder. Please note that you need to keep your Nokia X connected to the Windows PC during the complete process. 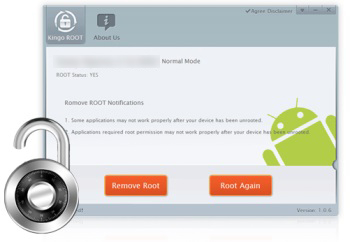 -Now users need to choose the Root button in the KingoRoot app on your PC to root the device. This will also install the SuperSU app on the connected Nokia X device automatically. This will take few minutes.

-Reboot the phone after the connected device (Nokia X) status in KingoRoot app shows Rooted on your PC. After the reboot, open the SuperSU app on the Nokia X, this will for the ask grant option on the app. Press grant and move ahead.

-After pressing grant, open KingoRoot on your PC again. This time the KingoRoot shows two options - Root again or Remove Root. To return your phone to normal, you can click on Remove Root.

-Now you can repeat the method of installing the Google Play store on the Nokia X (check Method 1) by extracting all the Google APKs using the root explorer. 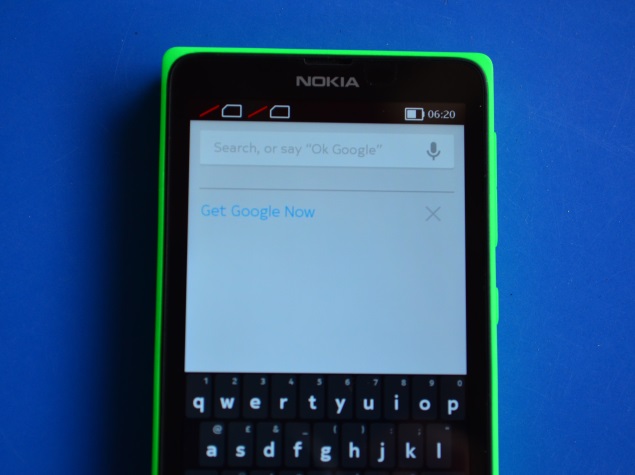 *Note- Our recommendation would be to install Google Play Store and other services on your Nokia X when it is running version 10.0.3, rather than updating the phone to software version 11.1.1. This is because the new method requires the KingoRoot app on your PC and the steps are a bit complicated when compared to the Framaroot app that worked well enough for us on our Nokia X.