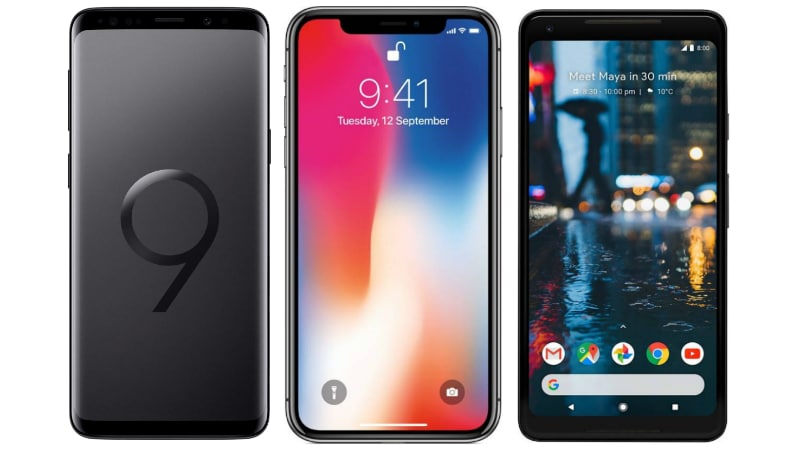 Samsung Galaxy S9+ was launched in India earlier this week, along with its smaller sibling Galaxy S9, within days of its global unveiling at Mobile World Congress 2018 in Barcelona. The new Galaxy S9+ is aimed at consumers who want a large screen smartphone that is not too large, and offers a flagship experience. While the design is quite similar to last year's Galaxy S8+, the Galaxy S9+ smartphone has more powerful processor options (Exynos 9810 in India) and debuts new features such as AR Emojis, and has improved cameras and audio. While the handset seems like a promising device for the top-tier buyers, it still faces a lot of competition in the market, especially from iPhone X and Pixel 2 XL.

The Apple iPhone X was launched way back in September 2017. Despite that, it is still one of the most popular and powerful handsets in the world, with features like an edge-to-edge display (with a notch), the Apple A11 Bionic SoC, and a vertical dual rear camera setup. On the other hand, the Google Pixel 2 XL was made official in November 2017. The phone runs a stock version of Android Oreo, and has initial access to all major Android updates for the near future. Apart from that, the Pixel 2 XL has premium specifications such as the Snapdragon 835 SoC and an 18:9 display. Here's a look at the Galaxy S9 price, specifications, and key features and we compare them with those of the iPhone X and Pixel 2 XL to help you make the final decision.

Samsung Galaxy S9+ price in India is Rs. 64,900 for the 64GB variant and Rs. 72,900 for the 256GB option. The variant with 128GB internal storage has not been launched in India yet, and there is no word regarding whether it will be released in the country. It will be available for purchase starting March 16, and pre-orders in the country are already live. The Galaxy S9+ will be sold in Midnight Black, Lilac Purple, Coral Blue, and Titanium Grey colour options.

Apple iPhone X price in India is Rs. 95,390 for the 64GB variant and Rs. 1,08,930 for the 256GB variant; prices were recently hiked after the Indian government increased custom duty on import of mobile phones. The handset is currently sold in India in Space Grey and Silver colour variants, and can be purchased across multiple online and offline Apple resellers.

Finally, Google Pixel 2 XL price in India is Rs. 73,000 for the 64GB variant and Rs. 82,000 for the 128GB model. Unlike the Pixel 2, the Pixel 2 XL is available in Just Black and Black & White colour variants. Launched online exclusively on Flipkart, the phone is also available via offline retailers such as Croma, Reliance Digital, and the likes.

In the camera department, the Galaxy S9+ bears a dual camera setup that has a primary Super Speed Dual Pixel 12-megapixel sensor with autofocus and variable aperture of f/1.5-f/2.4, and a secondary telephoto 12-megapixel sensor with autofocus and f/2.4 aperture. Both the Galaxy S9 and Galaxy S9+ sport an 8-megapixel front sensor for selfies and video calling. There is a 3500mAh battery under the hood.

In terms of optics, the iPhone X sports a dual rear camera setup with two 12-megapixel sensors that come with Optical Image Stabilisation (OIS). On the front is a 7-megapixel FaceTime HD camera for selfies and video calling. The phone has a 2716mAh battery powering the internals.

Talking about the phone's camera, the Pixel 2 XL has the same 12.2-megapixel rear camera as the one seen on Pixel 2. It comes with features such as f/1.8 aperture and EIS/ OIS. The phone has an 8-megapixel front-facing camera as well.

Samsung Galaxy S9 Successor May Not Be Galaxy S10, Mobile Chief Hints
Oscars 2018: A Guide to Best Picture Nominees (and Where to Watch Them Online)