Galaxy Note 7 Fiasco Has Cast a Shadow of Gloom on Samsung, Say Employees 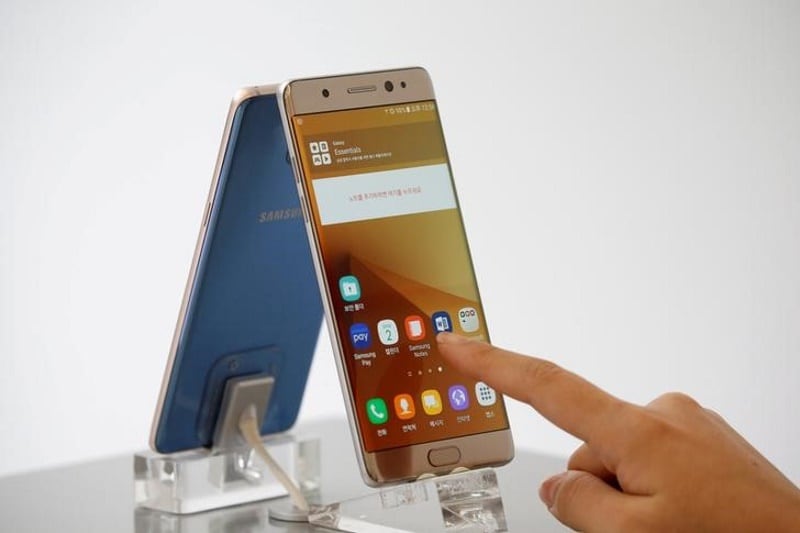 The people who make Samsung phones are an elite bunch. They hold the most coveted jobs at the most valuable company within Samsung Group, the largest and most prestigious conglomerate in South Korea.

But the sense of exceptionalism was smashed last week as Samsung Electronics Co. took the unprecedented step of killing off an entire generation of its Galaxy Note 7 smartphone after persistent problems with battery fires and explosions. Now the 26,600 workers in Korea who were celebrated for taking the company's profit and brand to new heights are seen as responsible for the worst crisis in Samsung Electronics's 47-year history. A sense of gloom has descended, employees say, describing the episode as sad and tragic.

Samsung has said the fiasco will cost more than $5 billion and the phone unit will probably pay a steep price. The division has often received the biggest bonuses within Samsung Group, typically about half of base salary, and employees now suspect they may get nothing. Some senior executives will likely lose their jobs too, including perhaps chief D.J. Koh.

"The mobile unit had naturally towered above other business divisions," said Kim Young-woo, an analyst with SK Securities Co. and former Samsung employee. "Now they've created what may be the worst-case scenario for corporate recalls in business school textbooks."

Samsung declined to comment on salaries, bonuses or potential job losses. "Right now, our focus is ensuring that all remaining Galaxy Note 7 devices are returned to ensure the safety of our valued customers," the company said in a statement.

Samsung introduced the Galaxy Note 7 in August and recalled the first batch of 2.5 million smartphones in September. The company was forced to call back the phones again this month after replacement devices it said were safe also overheated.

Samsung is navigating the crisis with its leadership in transition. Lee Kun-hee, the family patriarch and chairman, has been hospitalized for more than two years after a heart attack. His son, Jay Y. Lee, is vice chairman and heir apparent, but hasn't been able to take his father's position because of Korean customs. In the meantime, Samsung Group is being led by a management committee, which includes the younger Lee and Co-Vice Chairman G.S. Choi.

(Also see:  Samsung Offering Help at Airport to Those Affected by Note 7 Ban)

Smartphones Rising
For years, the mobile-phone unit was just one of several important divisions within Samsung Electronics, along with semiconductors and televisions. That changed with the advent of the smartphone and Samsung's success in becoming a leader in the burgeoning new field. The mobile-unit accounted for 27 percent of revenue in 2010, with the proportion surging to 61 percent in 2013.

That shifted the dynamics within Samsung. Suddenly, phone workers became big, important customers for other divisions, buying huge amounts of chips, glass-panels and other components. Profits soared for everyone.

Attitudes changed too. Phone-unit employees acted like the bosses at times, pushing workers to meet tighter deadlines while having the upper hand in price negotiations. They usually got paid better too and their bonuses were bigger. In 2014, then phone division head J.K. Shin received a KRW 12.8 billion ($11 million) annual bonus, at least 75 percent more than any other executive director. There was grumbling among other employees the past two years when phone-unit workers got their 50 percent bonuses even while mobile profits tumbled.

"The mobile division used to be the super boss at Samsung," said Chang Sea-jin, a professor at the National University of Singapore and author of "Sony vs. Samsung," a book on the company's rise against its Japanese competitor.

Samsung denied the mobile unit wielded power over other business divisions. "Samsung manages its supply chain based on fair and transparent policies and actively supports suppliers to establish mid- and long-term partnerships with them," the company said in its statement.

Reputation Damage
Now, employees are fretting the fallout from their role in such an expensive hit to Samsung's once-sterling reputation. Several workers agreed to discuss the current atmosphere and sagging morale, but asked not to be named because they're not authorized to talk to the press.

"A lot of people are worried about who will be held responsible," said one employee in the mobile group. "This isn't something you pull off alone. A lot of people are and have been involved. We all want this to be resolved and put behind us."

Workers say the debacle has caused soul searching inside the company.

"It's sad and shameful at the same time," said another employee in the mobile unit. "Wherever I go now, people ask me things like, 'Is everything okay? I hear the company is in big trouble.' It's a big lesson for us."

Outside the mobile phone division, employees feel some resentment that the company is taking such a blow because of the actions of a few. They want more rigorous procedures to be implemented to avoid such problems in the future, especially if they are caused by rushing to meet unrealistic deadlines.

One worker with the components division said the mobile unit needs to realize its limits and be extra careful in the future.

"We are strongly committed to determining and addressing the cause and to taking any and all necessary steps to ensure this never happens again," Samsung said in its statement.

The company's employees are trying to stay confident about the future. They take comfort from the fact that the Galaxy Note 7 drew positive reviews before the battery problems surfaced. They believe they can emerge from the gloom of the latest crisis.

"If we're able to nail it with our next phone, we'll eventually be able to put the Note 7 issue behind us," said one of the phone unit workers. "If we don't, we won't get a second chance."