One of the reasons people prefer Android phones over other mobile operating systems is the ability to wildly tinker with the user interface. In our own team, lots of people cited the customisability of Android as the reason they prefer it over iOS.

Everything, from icon packs, to fonts, to behaviour, is changeable. This openness gave rise to a wide range of launchers, applications that change the appearance and functionality of the Android home screen and app drawer. There are the highly customisable ones like Nova Launcher and Action Launcher 3, which let users minutely tweak the phone’s behaviour. But if such granularity doesn’t interest you, there are some other unique things developers have done with Android launchers.

We looked at a wide variety of Android launchers to find the most interesting ones that you can install on your device today. Here are five that really stood out to our eye, and not necessarily the most popular ones. All these launchers are free, and we've tested them all out to make sure they work as advertised.

1) Yahoo Aviate Launcher
Aviate’s popularity surged after its sale to Yahoo in 2014. At the core, Aviate is a launcher with a clean appearance and some interesting functionality. For one, it sorts your apps by category. So, all social networking apps like WhatsApp, Facebook, Instagram, and so on, that you may have installed on your phone, are clubbed together. All media apps like Netflix and YouTube are placed in the Entertainment column. This makes it easier to find the app you’re looking for. The Suggested button populates apps similar to the ones you’ve installed in a particular category. If you’re not a fan of sorting by category, you can also create your own Collections, which is the same as creating a folder. Swiping right also gives you an alphabetical list of all your apps.

Moving on, there’s a single home screen where you can place your most-used apps. A smart touch here is the use of just app icons with no names underneath, so they occupy less space. Think about it, you should be able to identify your most-used apps by just the logo. Swiping left reveals a Google Now-like card interface, showing you contextual information, with easy shortcuts to book an Uber, or control music playback of popular streaming apps.

Aviate also does some intuitive things like bringing this music playback widget upfront the moment you connect your headphones or speaker o the 3.5mm jack. Lastly, there’s a selection of regularly refreshed wallpapers to choose from. 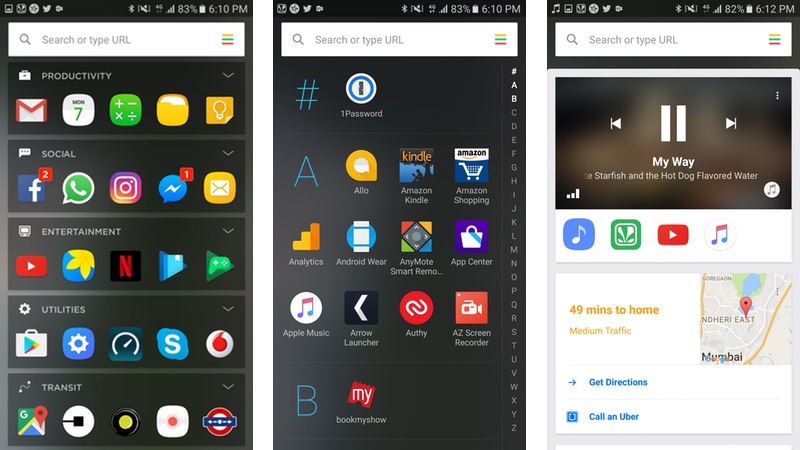 2) Arrow Launcher
Microsoft’s Arrow Launcher too brings some interesting concepts to the table. First off, there are multiple screens (called Pages), and each page has a unique function. There’s a People page that shows frequently contacted people. Next up is Reminders, which is built right into the home screen, letting you jot down tasks that you can check off when done, or set a date and time to be reminded.

Next, there’s a Recent page that shows recently captured images from the Gallery, along with a chronologically arranged information such as messages from WhatsApp, phone calls, app installs, videos taken, and so on. This way, you can look back at your activity by simply scrolling downward. 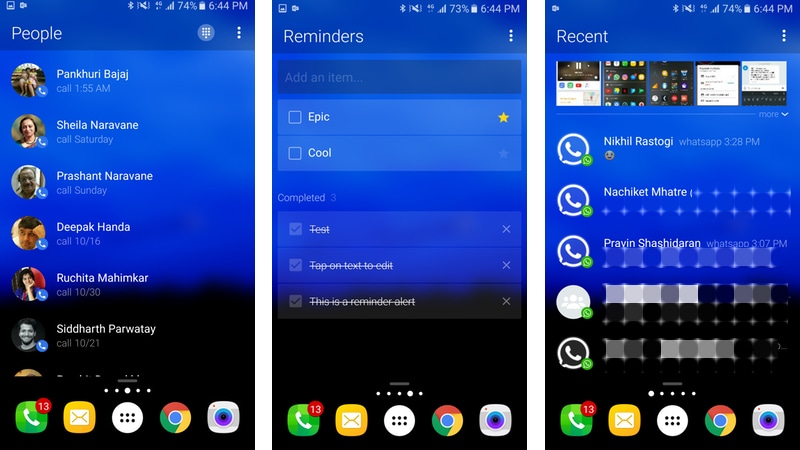 3) Evie Launcher
Evie has a very polished appearance and brings one of the most popular features of iOS to Android - universal search. Pulling down anywhere on the home screen puts the focus on the search bar and pops the keyboard, so you can start typing what you are looking for instantly.

It can search apps, contacts, music, and apps from the Play Store, and even details on movies and restaurants. It uses sources like IMDB, Rotten Tomatoes, TripAdvisor, Foursquare, and more to populate the data. If all else fails, there’s also a one-click shortcut to search Google for whatever you’ve typed in the search bar.

There’s nothing more to Evie other than this. The launcher doesn’t have multiple homescreens; a swipe from left to right reveals an alphabetically listed app drawer. This simplistic design is purposeful, as the company behind the launcher wants to integrate all the services people typically use into the Evie search bar, so you spend less time bouncing between apps to perform a task.

Upon launch, Evie was US-only, and it has recently opened up for international users. As a result, the services integration isn’t the most relevant for Indian users yet. But despite that, it’s still a no-nonsense launcher that you'd like to use. 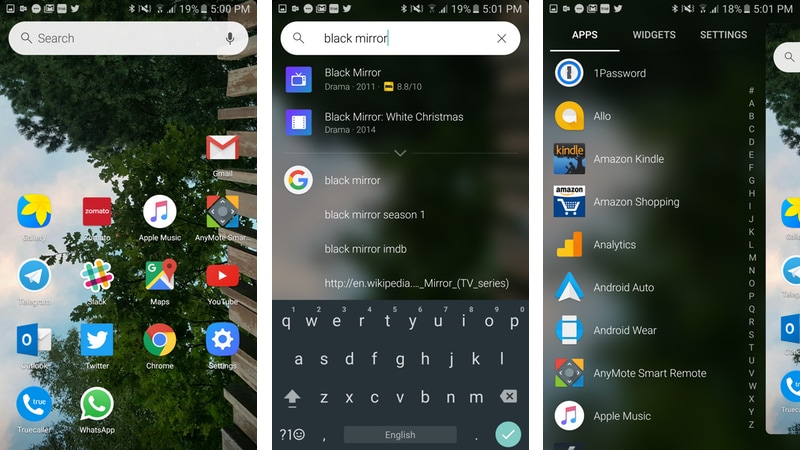 4) Z Launcher Beta
If you thought Evie was simplistic, wait until to take a look at the Nokia's Z Launcher. The primary home screen on this launcher shows recent activity in nice, big fonts. To use the Z launcher, you have to trace a couple of alphabets of whatever you want to do - and suggestions start popping up. For example, trace a ‘U’ in the middle of the screen, and Z Launcher will show apps and contacts with that letter in the name. You can continue drawing alphabets to further refine your search. You can swipe back to delete a character.

There’s also a traditional alphabetically sorted list of all your apps, for the times when you just don’t want to scribble letters on the screen. There’s a screen to the left where you can put your widgets. In our experience, it’s a bit unsettling to not have access to frequently used apps like the dialer, or WhatsApp, at one tap. But it’s an interesting approach nonetheless, and it will likely appeal to some. 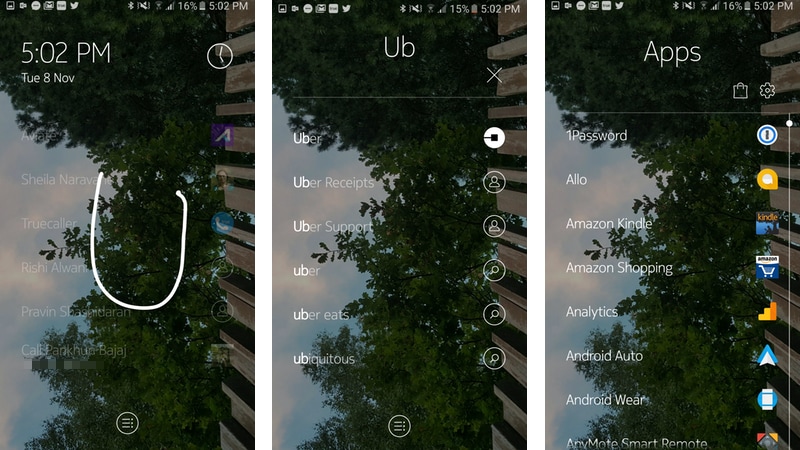 5) Hexy Launcher
Born out of a hackathon held by SwiftKey, Hexy might remind you of Windows Mobile 6.5, which had a honeycomb structured app drawer. This kind of arrangement of app icons also feels a little like the home screen of the Apple Watch.

Hexy automatically organises your most-used apps in the central most area of the hexagonal grid. That way, the apps you need the most are always easily accessible. Less relevant apps start filling out in all directions and you can pan around to find them. As you may have guessed, this makes rarely-used apps a little hard to find, as they’re not organised in an alphabetical fashion. Fortunately, you can switch to the A to Z style listing in a single tap. There's also a search bar to type the app you're looking for. A button at the bottom right corner of the screen gives you access to all your widgets in one place. 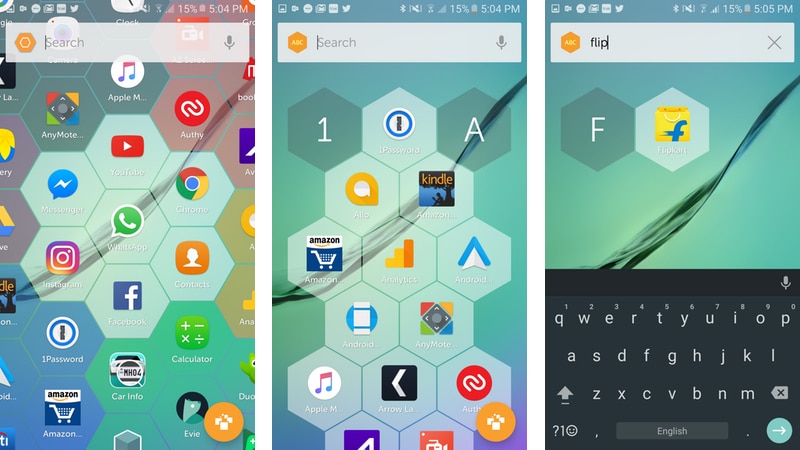 We hope you’ll have fun giving these interesting launchers a spin, and spice up your Android phone in the process. Do you know of other such wacky launchers that we must try? Let us know via the comments below.