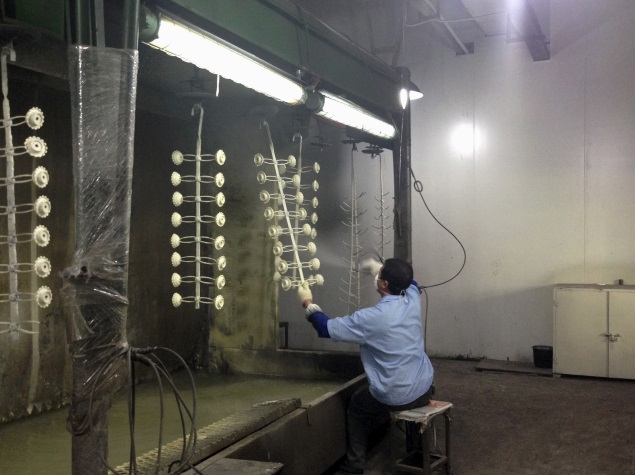 Eight years ago, Pascal Lighting employed about 2,000 workers on a leafy campus in southern China. Today, the Taiwanese light manufacturer has winnowed its workforce to just 200 and leased most of its space to other companies: lamp workshops, a mobile phone maker, a logistics group, a liquor brand.

"It used to be as long as you had more orders, you could get everything you needed to expand your factory, and you could expand," says Johnny Tsai, Pascal's general manager.

No longer. The Chinese factory - an institution that was once so large, it was measured in football fields - is shrinking.

Their contraction suggests a new model of light manufacturing emerging from China's economic slowdown: smaller plants are replacing the vertically integrated behemoths that defined Chinese manufacturing in the early 2000s.

Cankun, an appliances factory in southern China featured in the documentary Manufactured Landscapes, had more than 22,000 manufacturing employees in 2005, according to its annual report. Today, that number has shrunk to just 3,000, according to a senior executive. Some Hong Kong-owned factories in southern China have cut their staff numbers by 50-60 percent, according to Stanley Lau, chairman of the business lobby Federation of Hong Kong Industries.

Not extinct
To be sure, the giant Chinese factory is hardly extinct.

Taiwan's Foxconn Technology Group still employs about 1.3 million people during peak production times, many of them piecing together Apple iPhones. And factories that can afford to, including Foxconn, are increasing automation.

But for industries where the product design changes frequently, such as lighting, robots add little value.

Chinese factories' contraction illustrates how much the advantages they once enjoyed have eroded. In the 1990s and early 2000s, cities in Chinese coastal regions competed to offer investors discounted land. Today, the same land is scarce, and dear.

New labour and environmental laws have been introduced, too, making life tougher for employers.

And the workforce has changed. China's working age population began to contract in 2012. The number of strikes more than doubled last year compared to 2013. Jobs have shifted into the services sector. And labour costs have more than quadrupled in US dollar terms since 2005, according to the Economist Intelligence Unit.

Higher wage costs are in turn making it more expensive to close down, move, or restructure. Chinese law requires companies terminating employees to pay compensation worth one month's salary for every year of employment. In addition, workers at struggling plants often demand back payment of unpaid social welfare and pension benefits. Having fewer employees makes it cheaper to shutter a plant.

Nor are orders what they used to be.

On Monday, China announced that export volumes fell 15 percent in March compared to the same period the year before. China's manufacturing PMI, which measures activity in the industrial sector, has been hovering around 50, the inflection point between expansion and contraction, for nearly two years.

Subcontracting
Pascal, which Tsai says is still profitable, began to shed workers through natural attrition during the global financial crisis. Today, it sells lights that it designs - a practice that allows it to command higher prices. The rent from its tenants, including a Chinese company that designs and assembles mobile phones for export to India, also helps.

To lower costs, Pascal also subcontracts lighting orders to other plants when its customers allow.

For global retailers and brands that rely heavily on Chinese plants such as WalMart, Sears, Target, H&M, Adidas, Nike and Gap, the increase in outsourcing among smaller plants is both good and bad news.

Smaller plants with lower overheads are more competitive. But subcontracting can lead to more quality problems and eliminate transparency for customers as orders disappear into a network of suppliers invisible to international buyers.

Shrinking may also be the last stop on the road to closure.

"When factories are small, they can fail," says Ben Schwall, an American businessman who has been buying from Chinese factories for two decades. "It's a lot easier to close up when you're a design and marketing centre."

Consultants to Chinese factories say many could find other ways to cut costs and improve efficiency beyond simply reducing their workforce.

"They must innovate or improve the way they are managed, or they will not survive."