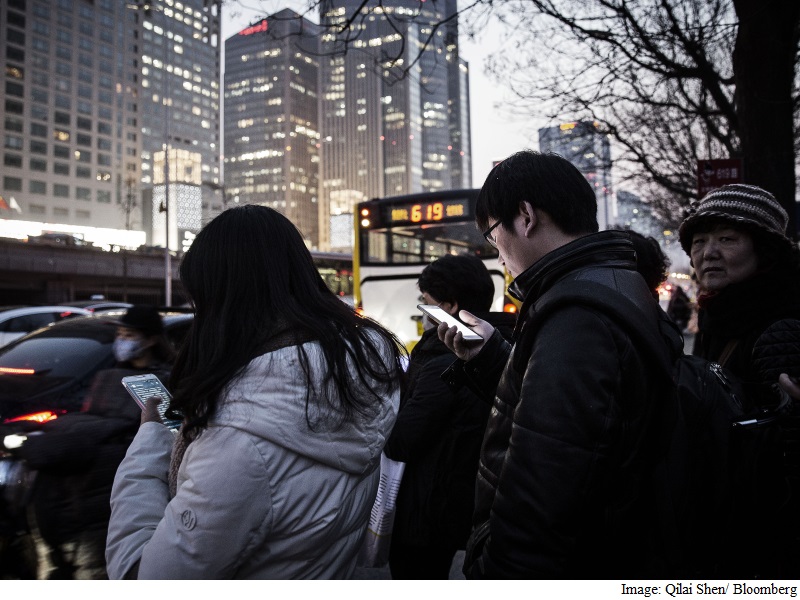 Highlights
The startup Dakele looked pretty smart when it released a phone in China four years ago. The market was doubling annually, and the company put brand-name components inside a device that cost a fraction of the iPhone.

That $160 gadget went on sale just four months after Dakele opened its doors, and soon the company, which translates as "Big Cola," made inroads against Huawei Technologies and Xiaomi Corp. Buzz was building for the Dakele 3 model last year, with online reviews calling it the best Apple clone.

Then the sizzle started to fizzle. Huawei spent $300 million on marketing, Xiaomi cut prices and clones of the clone appeared. Troubles with a supplier and raising money prompted Dakele to shut down last month-and it likely won't be alone.

China's herd of 300 phone makers may be halved in 12 months by competition, a sales plateau and economic growth that's the slowest in a quarter-century, according to executives and analysts.

"The mobile-phone industry changed more quickly and brutally than expected," Dakele Chief Executive Officer Ding Xiuhong said on his Weibo messaging account. "As a startup, we couldn't find more strategies and methods to break through."

Smartphone sales in China exploded earlier this decade as incomes rose, prices for chips and displays plummeted, and carriers offered arrays of discounts. Shelves were flooded with hundreds of brands-from national heavyweights Huawei, Lenovo and Xiaomi to the smaller Dakele, Tecno Mobile and Gionee.

Shipments more than doubled in each of the three years ending 2012, according to researcher Canalys. Xiaomi's valuation rocketed to $45 billion, and the phone maker started selling devices in India, the world's fastest-growing major economy. Lenovo Group Ltd. spent $2.91 billion to acquire Motorola Mobility to help make it "a global player."

In 2011, only four of the top 10 vendors in China were domestic. Last year, there were eight.

Now that wave has crested. Smartphones no longer are novelties in China, and most domestic brands target the mid- and low-price ranges, where buyers don't upgrade as frequently as those for high-end Apple and Samsung Electronics phones.

Jack Ding has been selling phones and accessories in his shop on Beijing's Third Ring Road for about two years. He has about 20 different models on display, predominantly local brands such as Huawei, Lenovo and ZTE. Yet they're not moving that well.

China's economy also stalled, with last year's growth retreating to its slowest rate since 1990. China smartphone sales last year grew by 2 percent-the lowest ever recorded by Canalys. In 2011, that rate was 150 percent. The cumulative effect may be that about half of all Chinese vendors get swamped, said James Yan, an Beijing-based analyst at Counterpoint Research.

"The market will consolidate to about 150," Yan said. "Some small players will survive but many, like Dakele, will go bankrupt."

As the smaller manufacturers are being winnowed, the bigger ones are expanding their share of the market. China's top two brands-Xiaomi and Huawei-owned a combined 30 percent of the market last year, compared with Apple and Samsung's 22 percent.

"It's becoming a tough market even for tier-one players like Huawei or Xiaomi because it's hitting saturation," said CK Lu, a Taiwan-based analyst at Gartner Inc. "In order to face that market saturation, they're expanding into the lower tiers that were owned by the smaller brands."

Xiaomi shipped just 181,000 smartphones in China in 2011. Last year, it led the market with 64.9 million shipments, according to Canalys.

Huawei saw its shipments multiply by almost seven times to 63 million units during the same period. The Shenzhen, China-based company invested $1 billion in research and development for smartphones last year.

"We've been seeing and predicting consolidation in the Chinese market for some time now," said Joe Kelly, a spokesman. "You have to be able to develop the phone to differentiate from others. Otherwise, you're just another 'Me, too' provider."

The Dakele 3 was aiming to be the next Xiaomi Mi4 or Huawei Mate. It had a sapphire-coated screen, Sony Corp. image sensor and MediaTek Inc. processor for $230-about a third the price of a basic iPhone 6. The company, which operated in the Tianjin Airport Economic Area, had more than 1 million online followers.

"The failure of our venture broke our hearts," Ding said in his posting. Dakele's website was taken down, and Ding wouldn't answer questions when contacted through calls and text messages.

Shenzhen-based OnePlus couldn't keep up with the copycats, so it cut staff in China and switched focus overseas, including in the United Kingdom, where it recently hired six executives.

"It seemed like at one point all the smartest Chinese entrepreneurs were starting their own smartphone companies," said Carl Pei, a OnePlus co-founder. "We had to invest a lot to break through the noise."

Pei predicted the number of domestic vendors will shrink during the next five years.

For many of the vendors that do survive, their strategies often center on going abroad. Xiaomi has 3.2 percent of the India market, compared with Apple's 0.9 percent, according to Bloomberg Intelligence.

Africa is another destination for China's smartphone makers, including Transission Holdings, which is Africa's most popular vendor with 8,000 employees and brands including Tecno Mobile, Itel Mobile and Infinix Mobility.

The excessive competition in China prompted the move, said Jason Liu, chief marketing officer. Instead of aspiring to be a premium brand, Transission is content occupying the mid-priced shelves.

The company has 2,600 employees in Africa and expects to ship about 80 million devices this year, with about 35 percent of them being smartphones. Transission also will start selling products in India by the end of this month.

"We have the early-bird advantage," he said. "If we had stayed in China, we might already be dead."