Behind the Scenes at Apple's Controversial China iPhone Factory

The men and women stare into face scanners and swipe badges at security turnstiles to clock in. The strict ID checks are there to make sure they don't work excessive overtime. The process takes less than two seconds.

This is the realm in which the world's most profitable smartphones are made, part of Apple's closely guarded supply chain. After years of accusations that employees in China were forced to work long, grueling hours, Pegatron and Apple adopted new procedures to keep iPhone assemblers from amassing excessive overtime. They're eager to show how the system works, and for the first time are granting a western journalist access into the inner sanctum.

John Sheu, known at the factory as Big John, or the Mayor, is giving the tour to a Bloomberg reporter. He's the president of Pegatron's facility, where as many as 50,000 people assemble iPhones. It's his job to make sure that more time is spent making phones rather than wasting it on unproductive distractions, like roll calls and ID checks.

After passing through metal detectors to sniff out camera-equipped devices that could be used to leak pictures of unreleased new products, the workers follow arrows on the floor and inspirational posters on the wall. They climb up a stairwell with safety netting draped across the middle, to prevent accidents-or suicide attempts. At a bank of lockers, they don blue hairnets and swap their shoes for clean plastic slip-on slippers. At 9:20 a.m., the 320-worker production unit lines up with military precision in four rows for their roll call.

"Good morning!" they shout in unison under the watchful gaze of the Mayor, who is joined by shift supervisors holding iPads jerry-rigged with black tape. They scan in the workers. Six minutes later, they're on the production floor, assembling smartphones moving past on conveyor belts. On the day of the visit, one assembler was out sick, so the shift boss quickly adjusted the line to make sure no output was lost.

The factory at the corner of Xiu Yan and Shen Jiang roads is one of the most secretive facilities at the heart of iPhone production and covers an area equal to almost 90 football fields. In the center is a plaza with a firehouse, police station and post office. There are shuttle buses, mega-cafeterias, landscaped lawns and koi ponds. The grey and brown-hued concrete buildings are meant to evoke traditional Chinese architecture. The brand-new Shanghai Disneyland, which opens its doors in June, is a 20-minute drive away.

"The fact they let a reporter in shows that they are responding to external pressure and trying to be more transparent-at least on the surface they're trying to fix something," said Jenny Chan, a lecturer at Oxford's Kellogg College. "But they're still not telling us more about how they run the business, the whole labor system."

Inside, the factory still hides a secret, according to China Labor Watch. Base pay remains so low that workers need overtime simply to make ends meet, the advocacy group said. It said 1,261 pay stubs from Pegatron's Shanghai facility from September and October 2015 show evidence of excessive overtime. Pegatron, an Asustek spinoff, is the world's biggest contract electronics manufacturer after Foxconn, according to Bloomberg Intelligence.

Pegatron countered by saying the group miscounted because that period straddled state holidays, when pay was three times' normal. Apple and Pegatron say they were never contacted by China Labor Watch, which said it approached Apple but didn't get a response. Since March, the group said it's collected an additional 441 pay stubs that point to continued excessive overtime.

"The turnstile system, it's all about programming," said Li Qiang, executive director at China Labor Watch. He suggested that the ID checks were just for show, "otherwise there wouldn't be so many cases with hundreds of workers putting in excessive overtime hours."

Pegatron said it adheres to the Electronic Industry Citizenship Coalition's guidelines that cap overtime at roughly 80 hours a month. Apple said its suppliers stick to the industry group's code of conduct, while Pegatron said it can get exceptions to China's state maximum of 36 overtime hours a month because its work is seasonal.

For Tim Cook, Apple's chief executive officer, the scrutiny is a direct challenge to the carefully assembled global supply chain he built as head of operations under the late Steve Jobs. The iPhone maker said it conducted 640 audits covering more than 1.6 million workers in 2015. In 2013, Apple dispatched medical experts to investigate a spate of workers' deaths at Pegatron. A 15-year-old died of pneumonia and the cause of death for others wasn't disclosed. Apple said it found no link to working conditions. 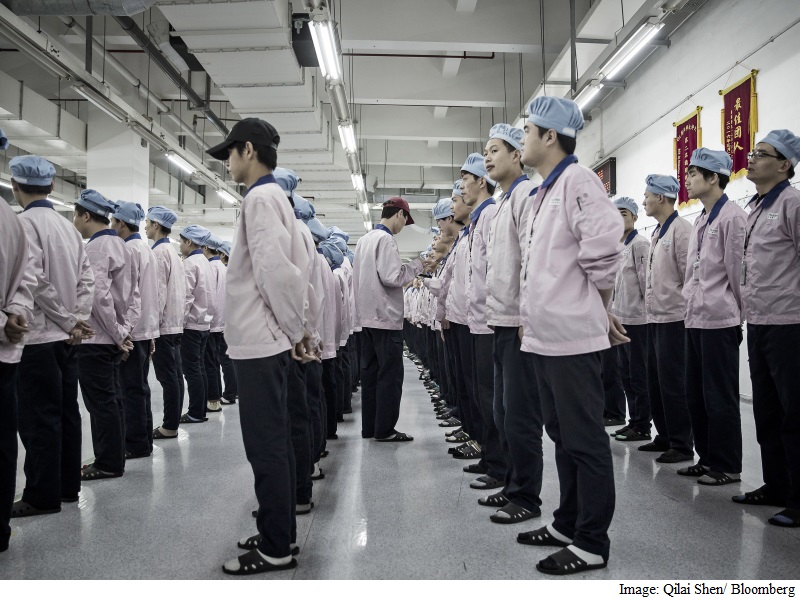 "Manufacturing is not a sin," said Denese Yao, who oversees Pegatron's relationship with its powerful customer in Cupertino, California. "People think we're just squeezing everything out of the workers," she said during the tour, although she was calling in via video conference from Pegatron's headquarters in Taipei. "We need to let them know what is an efficient and responsible working environment."

To do that, Pegatron adopted the new ID system, with badges linked to a database that tracks time, wages and even expenditures on dorm fees and lunch. The arrangement has helped to push compliance with overtime regulations to almost 100 percent, Pegatron said, with only a handful of exceptions stemming from engineers working on emergency repairs. In its latest audit, Apple said suppliers' compliance with the 60-hour work week was at 97 percent in 2015, up 5 percent from the previous year.

Some workers actually welcome the opportunity to boost their pay but that practice has subsided, said one Pegatron worker referred to Bloomberg by China Labor Watch, who would only disclose his surname Ma for fear of reprisal. "The maximum is 60, but the workers would prefer more hours because the wages are low," Ma said. "We can earn much more in overtime, so we always want more overtime."

"Manufacturing is not a sin."

When Ma joined the plant three years ago, employees routinely clocked more than the limit because they wanted the extra cash. That's no longer possible.

That's because of the system Sheu says he helped design. It links the turnstiles to the roll call iPads and each worker's ID badge, sending managers automated alerts if workers approach the 60 hour limit or have clocked in six days in a row. Try to go beyond those limits, and the system automatically blocks entry, executives and workers said.

"Sometimes you see people who can't get in on a Saturday or Sunday," said Guo Wanli, 25, a former construction worker from central Henan province, referring to those who volunteer to work overtime on weekends to boost their pay. He was eating a sausage on a stick in the central cafeteria during the tour, while executives stood by.

One improvement Pegatron executives were eager to share was increased income transparency. Employees can now check their hours, pay stubs, and monthly lodging and food expenses at touchscreen terminals throughout the campus. Including overtime, take-home pay averages CNY 4,200 to CNY 5,500 ($650-$850) a month. One employee, who helped workers access the automated information stations, showed her base salary was CNY 2,020. An iPhone 6 in China costs CNY 4,488.

"What do workers care about the most? They want to know about the money they earned," Sheu said. Deciding to open up payroll was difficult, Big John said, because of how employees might react, and how it would push management to be more accountable.

Pegatron encapsulates the changing social and economic landscape of China, which despite years of rising labor costs remains the linchpin of the global electronics supply chain. Contract manufacturers such as Foxconn and Pegatron dominate the world's output of everything from laptops and televisions to smartphones and tablets.

The focus is now shifting to productivity and talent retention as wages rise and an aging population reduces the worker pool. The nondescript factories and sweatshops of old are giving way to modern-style campuses with amenities such as free Wi-Fi, television lounges, cleaning services and even options for upgraded dorms.

"All enterprises are adjusting salaries, benefits and housing," said Jiang Ying, a professor of labor law at the China Institute of Industrial Relations. "Workers have more awareness of the law and that's pushed factories to improve."

At the same time, China's factories are finding it harder to find and keep people as the labor force shrinks, leading to more job hopping. Still, retention rates at Pegatron's Shanghai factory have increased about 20 percent a year for the past three years, according to Sheu. Last year, turnover averaged about 16 percent.

Back in the cafeteria, a group of women rush to finish lunch before their 50-minute break is over. They hail from across China, from Sichuan in the west to Shandong in the northeast. None has been there for more than a few months.

"This is relaxed compared to other factories," said Xu Na, 30, who followed her younger brother to work at the factory. "We never work more than 60 hours."

Further reading: Apple, Foxconn, Mobiles, Pegatron, iPhone
Dropbox 'Project Infinite' Shows Cloud Files as Local on Windows, OS X
This Is the Title of the Next Call of Duty Game

Behind the Scenes at Apple's Controversial China iPhone Factory
Comment