Google has revealed more details and a new beta of the next version of Android which is currently referred to as Android P. While the developer preview was available for select devices some time ago, the search giant has now opened it up for public beta, while also expanding the number of devices for which the beta will be available. During the Google I/O 2018 opening keynote on Tuesday, we got a glimpse at the new look of Android and all the features that it brings with it.

Without any delay, we loaded up the beta build on our Pixel 2 XL and here is everything that is new in Android P.

Every new version of Android brings some new design elements as well as UI changes and Android P is no different. Quick toggles have been updated to now use circular elements. The top bar is now in black which might be helpful in hiding the notch on phones that sport them. 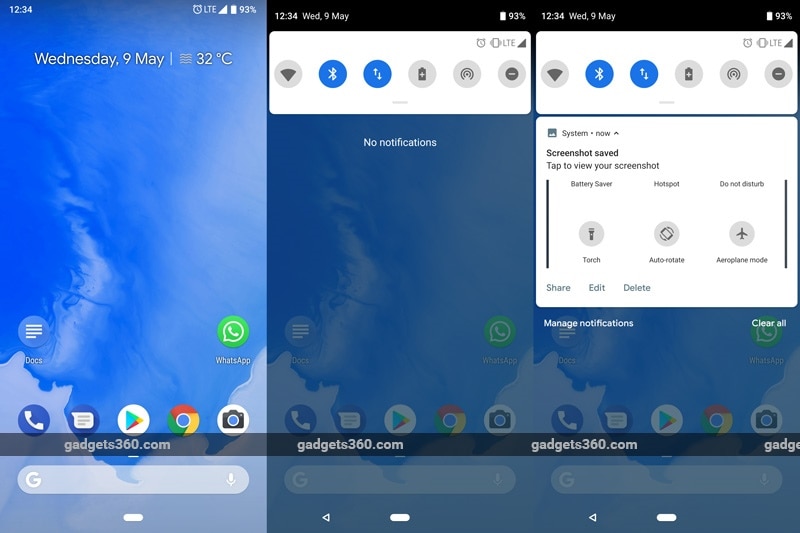 With Android P, Google has taken the first step towards gesture-based navigation. While the traditional three buttons are available for navigation, you can switch to having a single bar visible and use gestures for navigation. Swipe up on the bar once and it opens up recent apps, swipe up again to open up the app drawer. 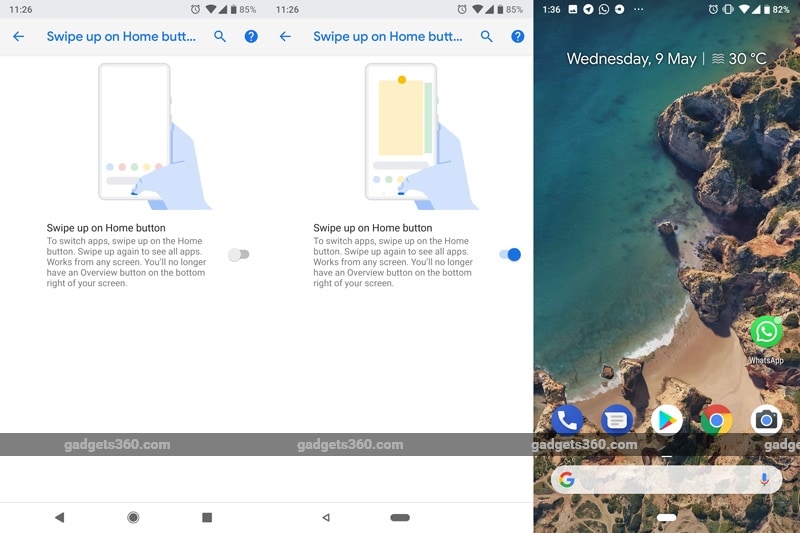 We also observed that a long swipe up lets you access the app drawer directly. The back button isn’t permanently available all the time but appears in its original spot when there is an option to take a step back.

Adaptive brightness is the newest feature where the phone learns how you adjust brightness levels in different conditions and does it automatically. 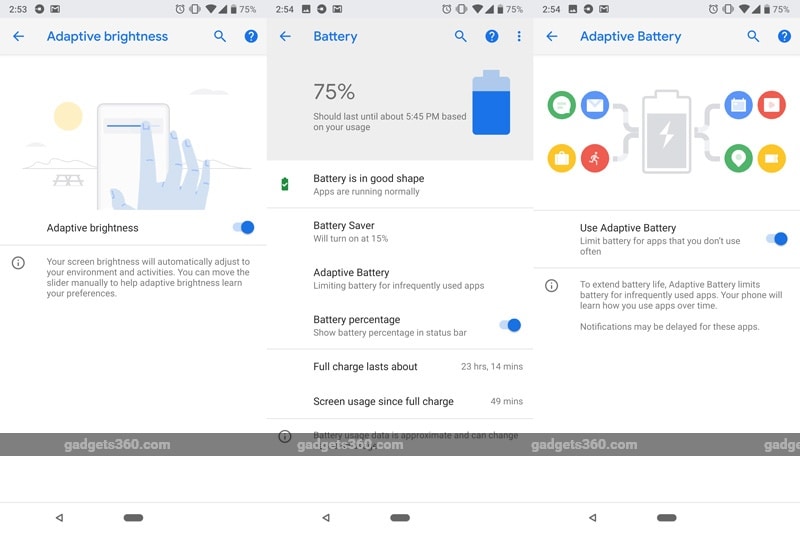 These two features depend on AI and will need some time to learn user habits before they start to show results.

Android Oreo has the app suggestion feature that uses AI to suggest apps that you are most likely to use. Google has expanded this feature and now suggestions for actions as well. For example, if it learns that you talk to a friend during the day, it’ll pop a suggestion to call that contact in the App drawer. 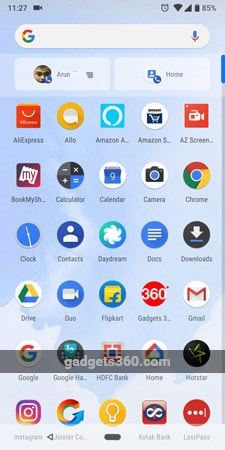 Slice is similar to actions but is a bigger UI element that helps users do more than one step at a time. Slices are interactive snippets and can only be accessed via Google search at the moment. For instance, type Lyft or Uber in the search bar and along with the app shortcut, you will see options to book a cab for home or for office. It will also include distance, price and estimated time of arrival.

All this can be achieved right from the search bar saving the user multiple taps.

Right until Android Oreo we saw that the volume rockers always controlled the ringer volume, unless you had media playing. In Android P, the volume buttons control the media volume by default and you also get a shortcut to toggle between different ringer profiles. The position of this slider has also been changed and it appears on the side of the screen where the hardware buttons are present. Also, you can quickly hold the volume up and power button at any point to switch the phone to vibrate mode. 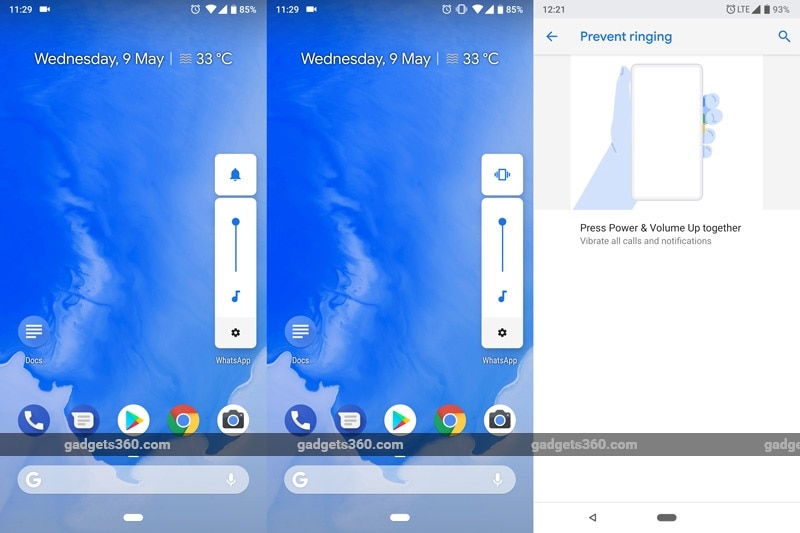 6. Shush and Wind Down

It’s no secret that people are spending inordinate amount of time on their smartphones. To help reduce this to a healthy level, Google says is introducing a new Wind Down feature, which is designed to help you get ready for sleep as the day draws to a close. The Wind Down mode kicks in at a set time and slowly switches the display to greyscale. This isn’t as stimulating for the brain, and it will serve as reminder to the users to put their smartphones down. Wind Down mode automatically switches off in the morning. 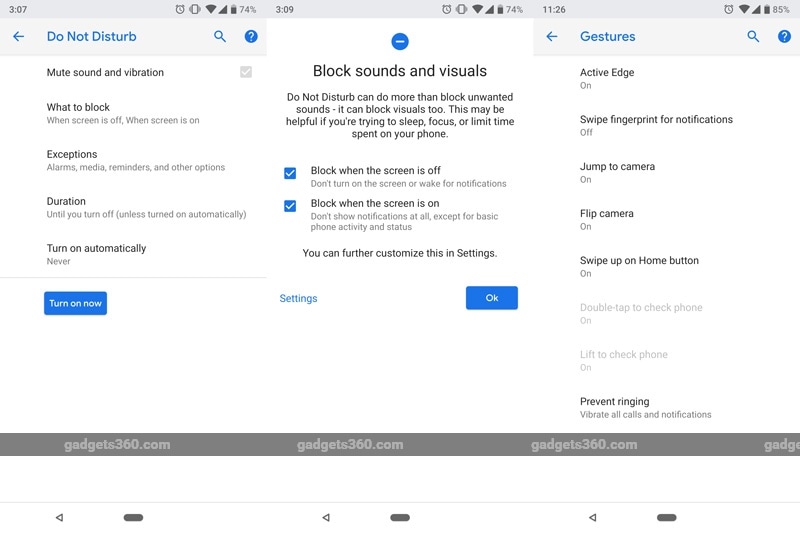 Shush is a comparatively simple function which switches the phone to Do Not Disturb mode when kept screen down. Users can assign favourite contacts whose calls will come through even in Shush mode. The phone will also ring if a caller makes more than one call in a span of 15 minutes. While Do Not Disturb mode is available, gesture for Shush and the Wind Down mode aren't included in the current build of Android P.

The Dashboard feature introduced in Android P is primarily a visual representation of the user's smartphone usage. It will display what apps the user has been using actively and for how long. You can also see how many notifications you get. This will help the user get an idea of how their time is consumed on the smartphone.

Along with the Dashboard, Google has also introduced App Timer, a feature to help users control how they spend their time. One can set a time limit for an app and after they hit the limit, the app icon is greyed out discouraging the user from using it. For example, if you want to limit your Facebook usage during office hours to 20 minutes, you can do that using the app timer. After the 20 minutes are up, the app won’t be accessible. Google hasn't included the Android Dashboard in the current Beta build.

Other new features of Android P

There are a few other nifty features as well, like the orientation switch button which lets users manually change screen orientation quickly. This helps users rotate the display even when auto rotate is switched off. When the phone detects that the phone orientation has changed, it displays a toggle button in the navigation bar at the bottom letting users switch orientation with one tap.

Other features include a new method of taking a screenshot which can be done by long pressing the power button and selecting screenshot in the power menu. On the launcher, Google has moved the search bar from the top of the screen to the bottom making it easy to reach. The company has also improved its smart text selection feature that it introduced in Android Oreo to support more apps beyond Google’s own.

Android P will keep getting updates till it is ready for general release, expected this fall. Which is your favourite new Android P feature? Let us know via the comments.