8 Tips to Extend the Battery Life of Your Smartphone 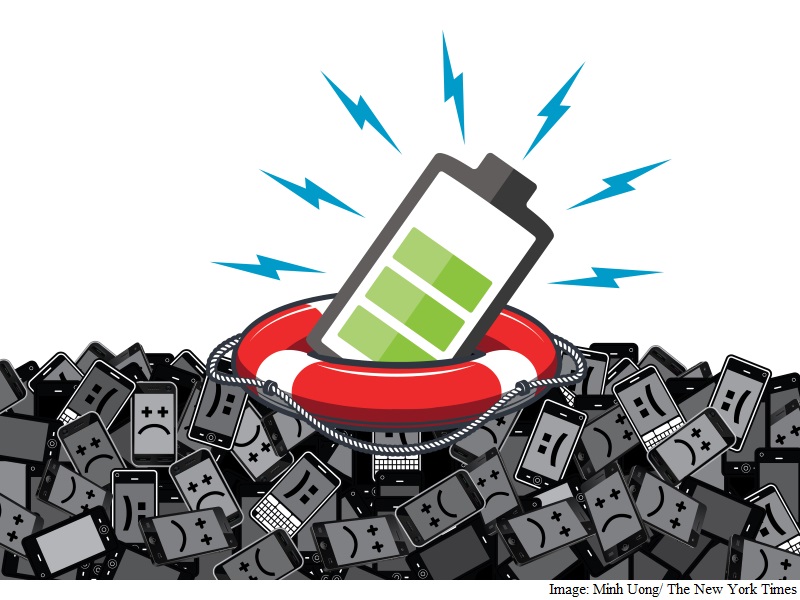 Temena, a San Francisco support technician, had gotten separated from her family and realized she had no way to find anyone. Instead of riding roller coasters, she wandered around searching for the group - eventually locating them four hours later watching fireworks.

"It sucked really bad," Temena said. "I wanted to throw my phone on the ground by the end of the day."

Many consumers can relate. Despite the leaps forward in mobile phone technology with crisp, clear screens and faster chips, batteries have made only sluggish progress. That has propelled a desire for longer battery life to the top of the list of factors considered by consumers when they purchase smartphones, according to a 2014 survey by the research firm IDC.

So why is battery technology still underwhelming? Plenty of companies have been developing smarter battery technology for years, including methods to increase battery capacity tenfold or charge devices by pulling energy from the air. But lithium ion, the technology that most mainstream batteries are based on, is low cost and easily reproducible while being safe - so we'll be stuck with it for the foreseeable future, said Charlie Quong, an executive at Mophie, a battery accessory maker, in an interview.

"There's a lot of investments on all fronts for improving the technology above and beyond that, but I don't think we're going to see that hitting any kind of mass market for several years out," Quong said. In general, lithium ion improves about 10 percent a year in terms of the amount of energy that can be stored in a given space, which is partly why consumers perceive batteries as being far behind other technologies.

With that backdrop in mind, we teamed up with the Wirecutter, a product recommendations website, to run an array of tests to determine best and worst practices for preserving battery life on smartphones. For those who still need extra juice, the Wirecutter also picked some external battery products.

The results showed that some conventional beliefs about extending battery life - like turning off Wi-Fi or shutting down all your phone's apps - produced negligible or even harmful results. The Wirecutter also found plenty of helpful practices to get more use out of your battery, like playing music stored directly on the device (instead of streaming it) or tweaking email configurations.

The Wirecutter tested a range of recent Apple and Android smartphones with the latest operating systems in tightly controlled environments. Your phone's results will vary depending on the phone model, cellular carrier, location and other factors, but the general results should hold. Here are eight tips:

But it's tough to use a dim screen in bright environments, so most phones offer an auto-brightness mode that automatically adjusts the screen's brightness based on ambient light. The Wirecutter found that enabling auto-brightness saved a good amount of battery life.

2. Block power-sucking ads
When browsing the Web, your smartphone also burns through power when it downloads mobile ads on websites. Installing an ad blocker will greatly extend battery life.

The Wirecutter ran a test that cycled through a list of websites for two hours over a Wi-Fi connection. Safari on an iPhone 6s used 18 percent of a full battery; Chrome on a Moto X Pure Android phone used 22 percent. Installing the 1Blocker ad blocker on the iPhone reduced battery usage for the same test to only 9 percent of a full battery; on an Android phone, using the Ghostery Privacy Browser, which blocks ads, used only 8 percent of the battery.

3. Tweak your email settings
Email can have a major impact on battery life if you have multiple email accounts and receive lots of email. Your smartphone can update your email automatically using a technology called push, which brings new messages to your phone the instant they are transmitted. Push can be a power hog because it requires your phone to constantly listen for new messages, so if you get a lot of email, there's a good chance your phone is using lots of energy.

The Wirecutter tested an iPhone 6s Plus configured with three email accounts, receiving a total of 20 to 30 messages an hour. In these tests, having push active over the course of a day caused Mail to account for 5 to 10 percent of the phone's overall battery use.

To save energy, most phones can be configured to instead check for (or "fetch") emails on a schedule - say, every 30 minutes - or only when you manually tell your email app to refresh.

4. Play downloaded music instead of streaming
The next tip may come as unwelcome news. Nowadays, online streaming is the most popular way to listen to music, with services like Spotify, Pandora and Apple Music - but this method guzzles lots of battery power. In the Wirecutter's tests, streaming music over a Wi-Fi connection for two hours used 10 percent of an iPhone's battery reserves; streaming the same music stored directly on a device over two hours consumed only 5 percent.

Fortunately, streaming services like Spotify and Apple Music still let you listen to songs the old-school way: by storing the music right on your device.

5. Turn off wireless when reception is poor
You may have noticed that when you're in a place without good Wi-Fi or cellular coverage, your phone's battery seems to drain much more quickly. That's because the phone uses energy searching for a good signal and, if the signal is very weak, trying to get a better connection.

To conserve battery life, disable the phone's wireless circuitry. Airplane Mode, an option that will turn off all wireless features, is a quick and easy solution in areas with poor reception.

Alternatively, you can disable (in your phone's settings) a single wireless feature. For example, if you have terrible wireless carrier coverage in your office, but Wi-Fi is great, disabling cellular connectivity while there will keep the phone from wasting energy trying to get a cellular connection while still letting you connect to the Internet over Wi-Fi.

6. Check the battery usage lists
Consumers can get even better results with a bit of sleuthing. Both the iPhone and Android systems provide a simple way to see which apps are using a lot of battery power. For iPhones and Android phones, open the Settings app and in the Battery menu, there are sorted lists of apps that are using the most energy.

On the iPhone's battery usage screen, tap the clock button to reveal information about how much of your battery life each app is consuming when you're actively using the app ("screen") compared with when you're not ("backgd"). On Android, the most useful information are the timers for "CPU total" and "CPU foreground." Foreground is how much time you had the app open; subtract "foreground" from "total," and you'll know how much time the app has been busy in the background.

Be on the lookout for apps that are active for extended periods in the background and are using a lot of battery power. Examples include an email app that spends lots of time checking for new messages even when your phone is asleep, a news reader that updates articles in the background or a fitness app that constantly monitors your location.

7. Disable unnecessary location tracking
Watch out for apps that track your location. Your phone's GPS circuitry, which determines your geographic location for mapping and fitness features, consumes a lot of battery power. A run-tracking program that monitors your precise location for the duration of an hourlong run will lower your battery level.

If a location-based app is using a lot of power, especially in the background, there's a good chance the app is using GPS, Wi-Fi and the phone's sensors frequently. You can decide whether to disable location features for it (either via your phone's Location Services settings, or by changing settings in the app itself). On an iPhone, you can disable the app's ability to track your location by going to Privacy menu and Location Services.

To disable location tracking on Android, go inside the Settings app, tap Apps, choose an app and select "Permissions," then tap to disable Location permission.

8. Shut off unnecessary push notifications
Both Apple and Google recommend disabling push notifications, which are essentially app alerts, to conserve battery life. Notifications require regular communication with notification servers, and each notification causes your phone to wake up for a few seconds, including turning on the screen, to show you a message and give you a chance to act on it.

In the Wirecutter's testing, receiving a few dozen notifications over the course of an hour didn't noticeably affect battery usage. But if you get a lot of notifications each day, that energy use can add up. If a particular app or service (say, Twitter or your email client) is constantly producing notifications, consider disabling notifications for that app.

If All Else Fails
If you have tried all the above and still struggle to get through the day with your battery, consider buying an external battery. These accessories - which can take the form of a bulky case with a built-in battery, or a separate battery pack that connects to your phone with a cable - can provide power to last an additional few hours at the end of the day, or even to fully charge your phone's battery.

The Wirecutter tested more than 100 external batteries for dozens of hours to pick a few favorites. Its favorite battery case for the iPhone 6 and 6s is Anker's Ultra Slim Extended Battery Case, which has enough power to fully charge a dead iPhone and then some, more than doubling the phone's battery life. For larger iPhones - the 6 Plus and 6s Plus - the Wirecutter prefers Tylt's Energi Sliding Power Case because the case's two-piece design makes it appealing.

For Android phones, an external battery pack is a good option. The AmazonBasics Portable Power Bank with Micro USB Cable 2,000 mAh is the best pack the Wirecutter tested that will fit in your pocket with your phone, and it's less than $10. A great battery pack for the iPhone is the $29 TravelCard, which is almost thin enough to fit in a wallet - with a built-in Lightning-connector cable to charge your phone.

For days of smartphone power, the Anker PowerCore 15600 is the Wirecutter's pick if you need to charge a phone repeatedly or keep a full-size tablet and phone topped up through a busy week. It has enough available power to charge a typical smartphone five times or to fill a large tablet such as an iPad Air almost twice - for under $40.

After her stressful day at Disneyland, Temena bought an external Amazon battery pack. She said the pack could fully charge her phone six times, but it wasn't ideal because of its bulk. Ultimately, she wishes her iPhone had a better battery.

"I don't understand why a battery wouldn't be able to keep up with all the other advances they're putting into phones now," she said.