MWC 2019 was all about new launches, foldable displays, and the upcoming 5G network. Many OEMs made their 5G phones official, including LG, Huawei, Xiaomi, ZTE, and even OnePlus, Oppo, and Sony demoed their 5G prototypes. The telecoms industry will begin the transition to new fifth-generation 5G cellular networks this year, and it promises nearly instantaneous transfers of huge amounts of data that will likely bring major changes to an array of consumer and health products, apart from smartphones. The 5G network will offer greater transmission range and total bandwidth, and faster speeds as well. Availability of all the phones is pegged for later this year.

From the Mi Mix 3 5G to the LG V50 ThinQ, we take a look at all the 5G phones announced at MWC 2019. Samsung notably launched its Galaxy S10 5G variant last week at an event in San Francisco, and has thus not been included in this list. The Samsung Galaxy S10 5G price hasn't been revealed for now, but it will go on sale from Q2 this year with Verizon.

The Chinese giant was the first to unveil a 5G smartphone at MWC 2019. While details about the phone are rather scarce at the moment, we expect more to come from Oppo soon. It confirmed that the 5G phone will be powered by the Snapdragon 855 processor and the Qualcomm Snapdragon X50 modem. The company even said it was partnering with telcos like Optus, Singtel, Swisscom, and Telstra for the launch and rollout of 5G products and services. 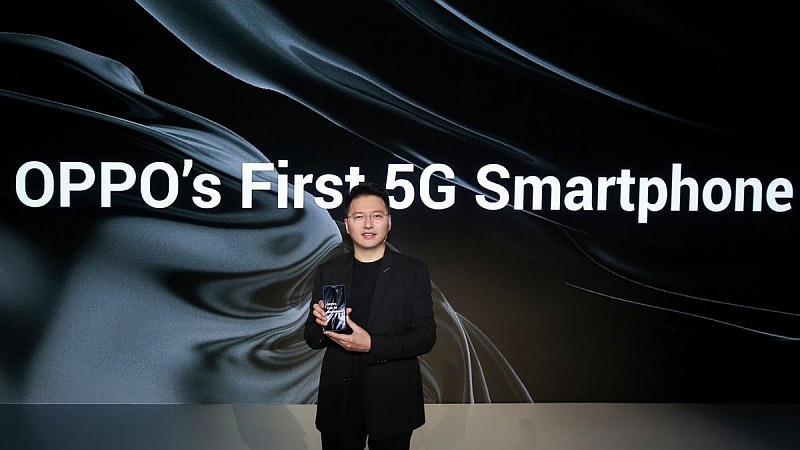 Oppo hasn't announced the pricing or availability details of its first 5G phone.

Xiaomi's first 5G offering - the Mi Mix 3 5G - was unveiled at its pre-MWC conference, and is touted to be "one of the world's first commercially available 5G smartphones." Aside from the new Snapdragon 855 SoC and X50 modem, the Mi Mix 3 5G has the same hardware as of the original Mi Mix 3. The modem is claimed to enable 2Gbps+ peak download speed on a 5G network. This means the Mi Mix 5G is capable of downloading a 15-minute 1080p (256MB) video in a second or 26 MP3 files (320Kbps) in a second.

The Mi Mix 3 5G price starts at EUR 599 (roughly Rs.48,300). It will go on sale starting May this year through Authorised Mi Stores, Mi.com, and select retail channels.

The LG V50 ThinQ 5G is expected to hit the market later this year, however, the company is yet to reveal its pricing.

Huawei Mate X
Huawei's first foldable phone launched at MWC comes with 5G support as well. The device folds out to transform into a tablet, and sports two display panels at the front and back when kept folded. It also features two-in-one triple camera setup, and is equipped with the Huawei Balong 5000 5G chipset.

Huawei Mate X features two FullView Display panels in 6.6-inch and 6.38-inch sizes that jointly bring an 8-inch OLED FullView Display panel when unfolded.it is powered by the HiSilicon Kirin 980 SoC, coupled with 8GB RAM and 512GB of internal storage. The Huawei Balong 5000 5G chipset comes as the world's first 7nm modem, capable of delivering up to 4.6/ 2.5Gbps downlink/ uplink speeds on Sub-6GHz. There is also a quad 5G antenna on the handset. Moreover, Huawei claims that the Mate X is capable of supporting not just the initial NSA network architecture but also the SA architecture that would debut in the future. 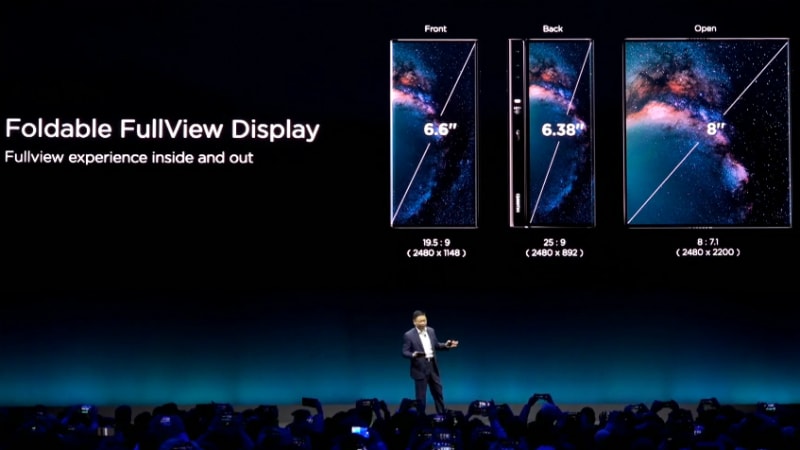 The camera setup includes three sensors, including a 40-megapixel sensor (wide-angle lens), 16-megapixel (ultra-wide-angle lens), and an 8-megapixel sensor (telephoto). Also, the phone packs two battery packs that jointly offer 4,500mAh of capacity. There is 55W Huawei SuperCharge technology that is rated to deliver 85 percent of power in 30 minutes of charge. It comes in a single Interstellar Blue colour option initially. Huawei is giving the Mate X to different carriers for 5G testing. 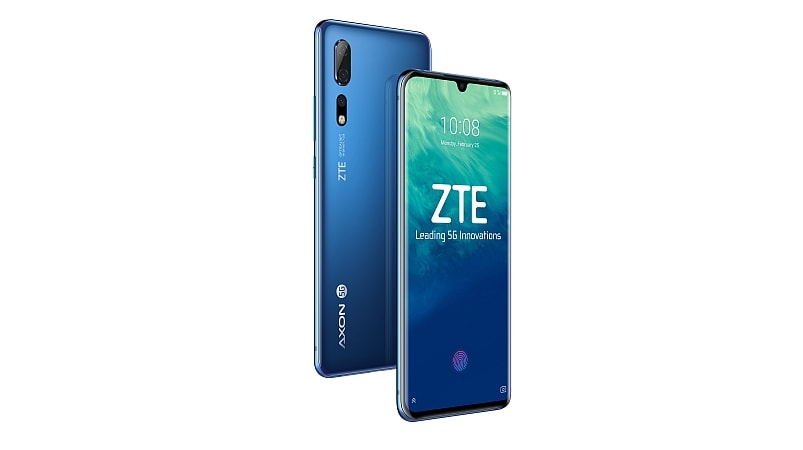 ZTE also announced its first 5G phone on the side lines of MWC 2019. The ZTE Axon 10 Pro 5G will be powered by the Snapdragon 855 SoC alongside the Snapdragon X50 5G modem, and revealed its design would bear a triple rear camera setup, an in-display fingerprint sensor, and a waterdrop-shaped display notch.

The ZTE Axon 10 Pro 5G is due to be made available in China and Europe in the first half of 2019, in partnership with China Unicom, Elisa, and Hutchison Drei Austria.

Sony Xperia 5G Smartphone
While Sony didn't make any 5G announcements at its dedicated MWC event, the company had kept a 5G phone prototype at its booth for display. The Sony Xperia 5G phone will be powered by the Snapdragon 855 SoC and pack s the Snapdragon X50 modem as well. It will also support 21:9 display, as seen on its flagship Xperia 1 launched recently. 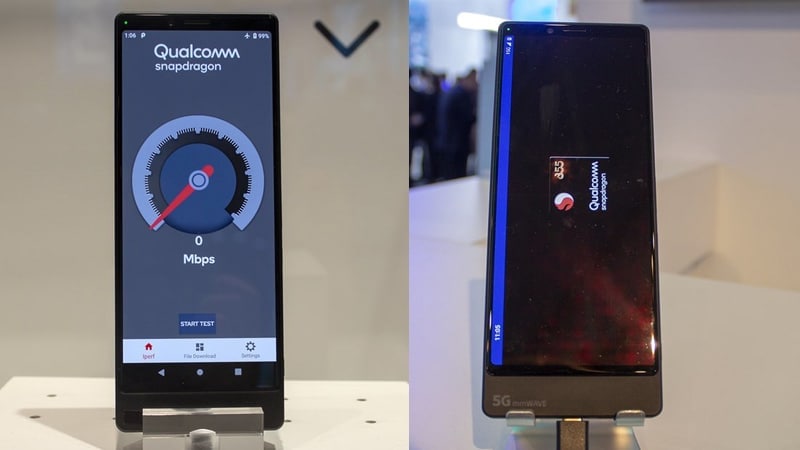 Sony hasn't confirmed when this prototype variant will be launched commercially, therefore pricing and availability details are not known.

OnePlus 5G smartphone
OnePlus also has been hinting on its plans of a 5G phone since last year, and it took the MWC event as an opportunity to display the device at its booth. The phone will be powered by the Snapdragon 855 SoC and pack the Snapdragon X50 modem to facilitate 5G connectivity. The 5G-ready OnePlus smartphone that is up for demonstration at MWC 2019 is heavily covered by a case that surrounds the sides as well as a large portion of its display, obscuring its design. 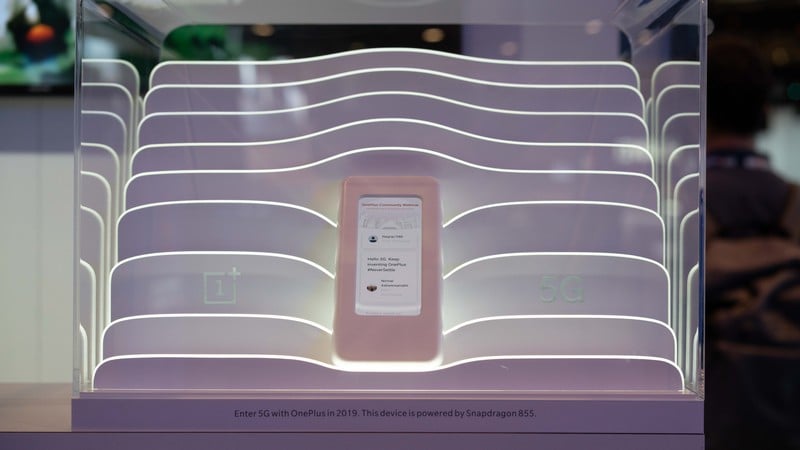 HTC Hub
While HTC didn't launch a phone at MWC, it did launch a new device that doubles as a 5G hotspot, content streaming hub as well as a battery pack for charging smartphones. The HTC 5G Hub is a mobile smart hub powered by the Snapdragon 855 SoC that acts as 5G hotspot for use at home and in office space. The device comes equipped with a 7,660mAh battery that allows it to be used as a charging hub for external gadgets like smartphones and can also be used for content streaming from platforms such as Netflix. 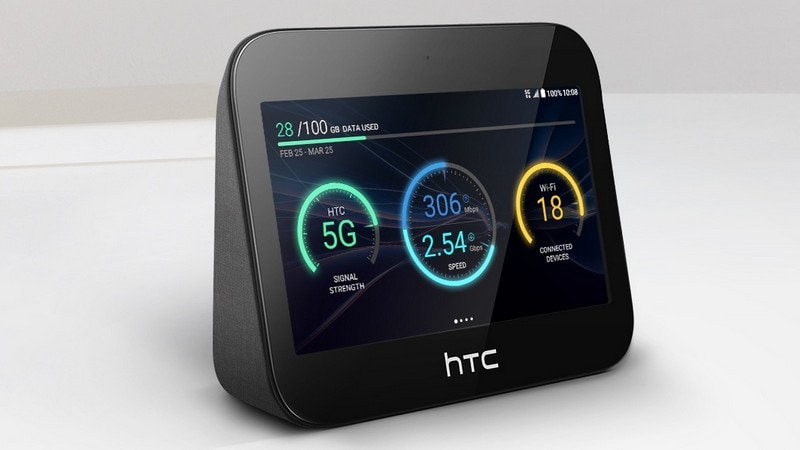 The HTC 5G Hub runs on Android Pie, packs a 5-inch HD display, is powered by the Snapdragon 855 SoC paired with 4GB of RAM and 32GB of inbuilt storage.Connectivity is handled by Bluetooth 5.0, Wi-Fi 802.11 a/b/g/n/ac/ad, while a Nano-SIM slot is there for 4G and 5G connectivity. The HTC offering can also be used for office work as it allows up to 20 people to connect to a single network and also facilitates the addition of a corporate VPN layer.

The Taiwanese company is yet to reveal the price of the HTC 5G Hub, which is expected to become available in Q2 2019 in the US, Australia and certain European nations, with Sprint, Telstra, Three UK, Deutsche Telekom, Sunrise, and Elisa.