2013: The year the smartphone became boring

This may be remembered as the year smartphones became boring.

Although high-definition displays on smartphones have gotten bigger and their cameras have gotten better, the pace of gee-whiz innovation has dawdled.

Smartphone and software makers are working on ways to snap out of this technological lull, although it probably will be at least another year or two before breakthroughs revolutionize the design and function of mobile computing devices.

In a foreshadowing of things to come, LG Electronics Inc. is boasting about the G Flex (First impressions), a new phone with a curved display. Previously available in Korea and Singapore, the concave device arrived in Hong Kong on Friday.

"We want to claim this as the future of smart devices," Ramchan Woo, the head of LG's mobile product planning division, said during a recent demonstration in San Francisco.

If such visions are realized, smartphones and tablets will be equipped with display screens that can be rolled up like a scroll or folded like a wallet.

Making the devices even easier to carry around will be important if software makers want to deepen the bond between people and their phones. That could happen as smarter tracking tools and voice-recognition technology let smartphones understand habits and thoughts like a family member.

The future smartphone "will be small enough to carry with you at all times without thinking about it, and it will be essential enough that you won't want to get rid of it," Silicon Valley futurist Paul Saffo said. "It will become a context engine. It will be aware of where it is, where you are going and what you need."

The G Flex provides a peek at the shape of things to come. Despite its name, the G Flex isn't pliable. The device is slightly bowed from top to bottom, allowing it to curve toward a person's mouth when used for phone calls. It also has a curved battery, something LG says is a first for smartphones. LG applied a "self-healing" protective coat on the G Flex to automatically repair any minor scratches.

More than anything, the G Flex is meant to begin the smartphone's evolution from the primitive state of flat screens. In theory, the curved-screen technology will lead to bendable screens, which will then pave the way to foldable screens. If that progression plays out, it would be possible to fold a larger smartphone so it can easily fit into a pocket.

For now, though, the G Flex's size makes it too cumbersome for most people to lug around. It has a six-inch screen, measured diagonally, making it among the largest phones out there. The cost also will limit its appeal. LG introduced the G Flex in its home country of South Korea last month for $940. LG wants to sell the G Flex in the U.S., but hasn't set a date or price or reached distribution deals with any wireless carriers. 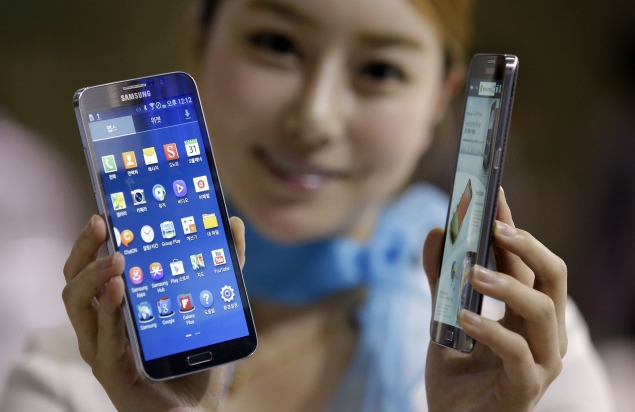 Another Korean company, Samsung Electronics Inc., also is selling a concave smartphone there. Unlike the G Flex's vertical bow, Samsung's Galaxy Round (Review) curves horizontally from left to right when it's held upright. With a price tag of about $1,000, the phone is more an expensive novelty than a mainstream product.

Like LG, Samsung is setting the stage for bigger things to come. Samsung Vice Chairman Kwon Oh-hyun told analysts last month that the company believes it can produce a mobile device with a foldable display by 2015.

Samsung appears to be working on two slightly different concepts, according to two analysts who saw prototypes of what's in the company's product pipeline during last month's meetings. Reporters weren't given a chance to see the prototypes. One featured a tablet-sized display panel that could be folded in half in the screen's midsection, according to the analysts. The display was thin and could be folded in only one direction. The rest of the panel was firm and flat, the analysts said. Another version had a more flexible screen capable of bending anywhere.

An Apple Inc. blueprint for making a device with a curved display was granted a U.S. patent this week, a development likely to feed recent speculation that the iPhone maker is working on a concave model. The Cupertino, Calif., company declined to comment.

Other device makers may show off products with curved screens in Las Vegas next month at CES, where tech companies often unveil their latest innovations.

Building smartphones with more pliable screens will pose several challenges for manufacturers. The battery, smartphone chips and other key components will have to become flexible, too, so they can bend with the device. Flexible screens also will probably be made of plastic, a material more likely to degrade or fail when exposed to high temperatures, oxygen or water.

The push to turn smartphones into more intelligent devices appears to be further along than the attempts to transform the display screens.

Both Apple and Google Inc., the maker of the Android operating system and the world's dominant search engine, already offer voice recognition technology and virtual assistants that enable smartphones to engage in rudimentary conversations and offer helpful tips. The ultimate goal is for smartphones to become so intuitive and efficient that they reflexively cater to their owners' needs.

"You'll be speaking to the phone, asking it to do things, and it will be responding and actually doing what you intend," said Dennis Woodside, CEO of Google's device-making subsidiary, Motorola Mobility.

The technological advances could border on the supernatural, according to IDC analyst Ramon Llamas. He expects the future relationship between people and their phones to be akin to fictional billionaire Tony Stark's connection with the computer-controlled armor that he dons to become Iron Man, a comic-book hero popularized in a trilogy of movies starring Robert Downey Jr.

If Llamas is right, future smartphones will become a person's navigator, security blanket, counselor and talisman. Without a smartphone to come to the rescue, a person may even feel reduced to being a mere mortal.