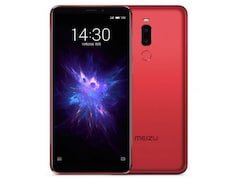 Meizu Note 8 is powered by a 1.8GHz octa-core Qualcomm Snapdragon 632 processor. It comes with 4GB of RAM.

The Meizu Note 8 runs Android Oreo and is powered by a 3600mAh battery.

The Meizu Note 8 runs Flyme OS based on Android Oreo and packs 64GB of inbuilt storage that can be expanded via microSD card (up to 128GB).