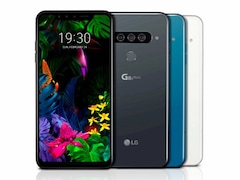 Of all the big global brands in the smartphone space, LG is probably the most easily overlooked. The company doesn't have a huge presence in the budget and mainstream segments these days, but still pushes out one premium V-series and G-series model every year. We've liked a lot of what we've seen, and these phones have impressed us with their cameras, displays, and overall performance. More importantly, LG seems to put a lot of thought into its products, with various little features and conveniences that stand out in an increasingly homogenous world.

LG isn't a big player in the smartphone market anymore but is still trying. The new LG G8s ThinQ was first unveiled at MWC 2019 but has launched in India several months later, so it now competes against several newer and more feature-rich models. The styling is dated, especially with the extra-wide notch, although that was necessary to fit in a Time-of-Flight 3D sensor and infrared dot emitter for security. Build quality is excellent though, and you get an IP68 rating plus Gorilla Glass on the front and back.

LG has overstuffed this phone with software features and customisations. Air Gestures are particularly gimmicky and we found them frustratingly difficult to use. There's a lot of bloatware and unnecessary animation that seems to bog this phone down a bit. However, performance in games and benchmarks was pretty good.

The display is impressive and we liked the stereo speakers on the LG G8s ThinQ. Battery life was just average. The three rear cameras take excellent shots, even in very low light.