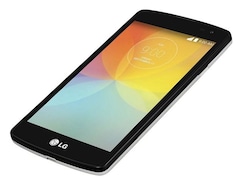 LG F60 smartphone was launched in September 2014. The phone comes with a 4.50-inch touchscreen display with a resolution of 480x800 pixels at a pixel density of 207 pixels per inch (ppi).

LG F60 based on Android 4.4.2 and packs 4GB of inbuilt storage that can be expanded via microSD card (up to 32GB). The LG F60 is a dual-SIM (GSM and GSM) smartphone that accepts Micro-SIM and Micro-SIM cards.