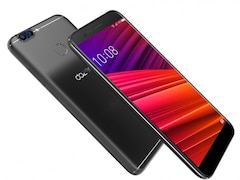 The Lephone Dazen 6A runs Nougat based on Android 7.0 and packs 16GB of inbuilt storage that can be expanded via microSD card (up to 128GB). It was launched in Black colour.

Lephone Dazen 6A price in India starts from ₹ 5,479. The lowest price of Lephone Dazen 6A is ₹ 5,479 at Amazon on 5th August 2020. This smartphone is available in 1 other variant like 3GB RAM + 32GB Storage with colour options like Black.